Moebius Syndrome Awareness Day is January 24. I’m a psychology professor who has and studies Moebius syndrome. Here are seven reasons why people with Moebius syndrome like myself seek understanding on many levels.

It’s a rare congenital neurological disorder involving facial paralysis and lateral eye movement paralysis. It’s caused by underdevelopment of the 6th and 7th cranial nerves in the brainstem, which govern lateral eye gaze and facial expression, respectively. No genetic or hereditary cause for Moebius has been identified. One theory is it might be caused by a brief disruption in blood flow to the embryo during early development (Briegel, 2006). Moebius has diverse effects. Some people have additional symptoms such as limb abnormalities and crossed eyes. Although the physical symptoms of Moebius may be challenging to navigate at first, once parents and people with Moebius syndrome develop expertise, many feel the remaining challenges are social in nature (Bogart & Hemmesch, 2016).

2. The #1 request from the Moebius syndrome community for is greater public understanding.

Moebius is a very visible but unrecognizable disability, meaning that strangers may immediately notice that the person looks different, but can’t figure out why (Bogart & Tickle-Degen, 2015). They make erroneous assumptions about the cause, nature, and accommodations needed. People with Moebius syndrome hear about all sorts of “interpretations” of their appearance. Strangers ask them if they had just gotten a Novocain shot, if they were having a stroke, or if the condition was contagious, deadly, or painful (Bogart, 2015).

In focus groups of people with Moebius syndrome, the most common topic is a desire for greater public awareness to reduce misunderstandings (Bogart, 2015; Bogart et al., 2012). They know firsthand that people are confused by their facial difference. Widespread awareness would reduce the need to explain Moebius and would educate others to pay attention to the alternative ways they express themselves. 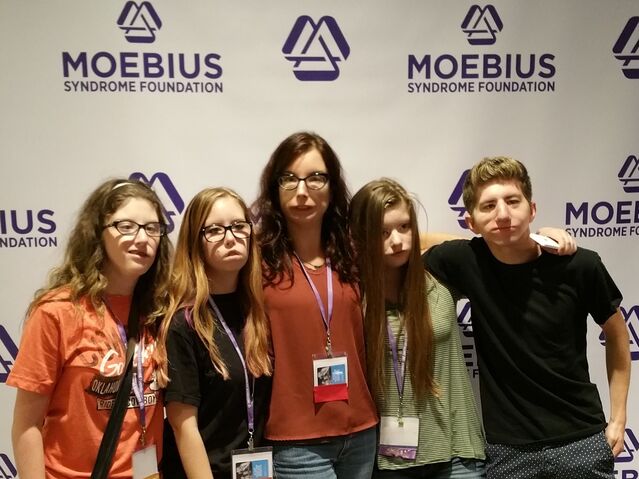 The author (center) with friends at the Moebius Syndrome Foundation Conference

People with Moebius are frequently misunderstood because facial paralysis limits expressivity (but they make up for it in body language), and it sometimes makes speech harder to understand. Because people are accustomed to receiving feedback from facial expressions, they may mistake a person with Moebius’ lack of facial expression as unfriendliness, boredom or intellectual disability (Bogart et al., 2012).

4. People with Moebius syndrome embrace expressive diversity and you should, too.

Humans use a vast array of communication channels, including gesture, prosody (tone of voice), language, posture, proximity, style, and facial expression. My research finds that people with Moebius syndrome amp up their expression through channels other than the face, something I call alternative expression (Bogart et al., 2012). This is an effective strategy; people with facial paralysis who use a lot of alternative expression are rated more positively by strangers than those who use less (Bogart, et al., 2014). Now that we must wear masks to prevent the spread of COVID-19, people with Moebius syndrome are already skilled in communicating without facial expression; those without facial paralysis could take a cue from them about expressive diversity. Many ways of being involve expressive diversity, including disability, culture, gender, and individual differences. Being attuned to expressive diversity can make everyone more sensitive humans.

People with facial differences are often avoided, stared at, feared, or bullied. Many in the Moebius community have stories about being ignored by shopkeepers or waiters, or spoken to only through a person that they are with. People with Moebius have been denied public facing jobs or face a glass ceiling in which they are not allowed to rise to a leadership role.

6. Healthcare providers (including psychologists) are unfamiliar with Moebius syndrome.

The rarity of Moebius means that most providers aren’t familiar with it, leading to diagnostic delays and inadequate support. It takes people with rare diseases 7-9 years on average to receive an accurate diagnosis. Healthcare providers should understand how to recognize Moebius syndrome, and how to research what they do not know with humility.

7. Research shows that information in this article reduces bias toward people with Moebius.

I conducted an experiment testing whether awareness helps people form more positive impressions of those with Moebius syndrome (Bogart & Tickle-Degnen, 2015). Some participants were assigned to an “awareness condition,” in which they read information like that in this article, and some were assigned to a control condition in which they were not given any information about facial paralysis. Next, all participants watched brief videos of people with facial paralysis. The participants in the awareness condition rated people with facial paralysis more positively than those in the control group. Knowledge is powerful!