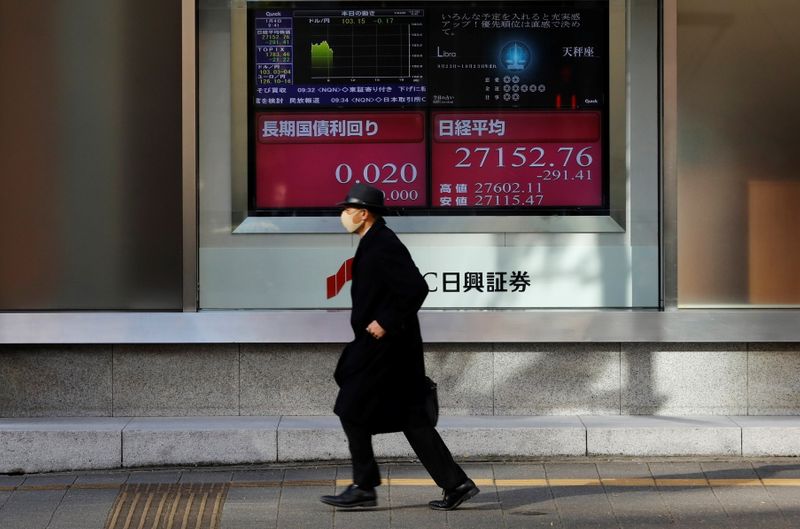 SYDNEY (Reuters) – Asian shares rose on Monday as concerns over rising COVID-19 cases and delays in vaccine supplies were eclipsed by expectations of a $1.9 trillion fiscal stimulus plan to help revive the U.S. economy.

Global equity markets have scaled record highs in recent days on bets COVID vaccines will start to reduce the inflection rates worldwide and on a stronger U.S. economic recovery under President Joe Biden.

Still, investors are also wary about towering valuations amid questions over the efficiency of the vaccines in curbing the pandemic and as U.S.lawmakers continue to debate a coronavirus aid package.

MSCI’s broadest index of Asia-Pacific shares outside Japan rose slightly to 721.96 and just a short distance away from last week’s record high of 727.31.

The benchmark is up 8.5% so far in January, on track for its fourth straight monthly rise.

rebounded from falls in early trading to be up 0.36%.

Australian shares were slightly higher too after the country’s drug regulator approved the Pfizer/BioNTech COVID-19 vaccine with authorities saying a phased rollout will begin late next month.

“The spotlight will be on Washington DC this week,” said Stephen Innes, Chief Global Markets Strategist at Axi.

The Biden administration tried to head off Republican concerns that their $1.9 trillion pandemic relief proposal was too expensive with lawmakers from both parties saying they had agreed that getting the COVID-19 vaccine to Americans should be a priority.

Financial markets have been eyeing a massive U.S. economic stimulus though disagreements have meant months of indecision in a country suffering more than 175,000 COVID-19 cases a day with millions out of work.

“But increasing global COVID19 infections, new variants of the virus, tightening social distancing restrictions and delays in vaccine rollouts in some places, all increase the near-term growth risks.”

Global COVID-19 cases are inching towards 100 million with more than 2 million dead.

Hong Kong locked down an area of the Kowloon peninsula on Saturday, the first such measure the city has taken since the pandemic began.

Reports the new UK COVID variant was not only highly infectious but perhaps more deadly than the original strain also added to worries.

In the European Union, political leaders expressed widespread dismay over a hold-up by AstraZeneca (NASDAQ:) and Pfizer Inc (NYSE:) in delivering promised doses, with Italy’s prime minister lashing out at the vaccine suppliers, saying delays amounted to a serious breach of contractual obligations.

“For the stock market to have a real nasty unwind, rather than just a bull market correction, there needs to be a catalyst,” analyst Christopher Wood said.

“That means either an economic downturn or a material tightening in Fed policy,” Wood said, adding neither was likely to occur in a hurry.

In currencies, major pairs were trapped in a tight range as markets awaited a U.S. Federal Reserve meeting on Wednesday.

The Japanese yen was unchanged at 103.77 per dollar.