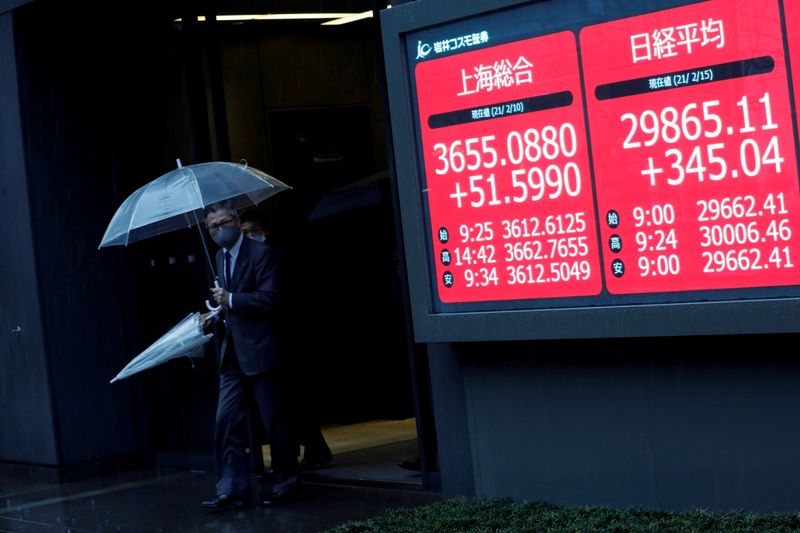 © Reuters. Men holding umbrellas walk near an electric board showing Nikkei index at a brokerage in Tokyo

“The dovish influence from the Fed is going to continue to resonate over in Asia. That’s really good for emerging market assets when we’ve got a really good impulse from the Fed,” said Stephen Innes, chief global markets strategist at Axi.

In a second day of testimony in Washington, Powell reiterated the Fed’s promise to get the U.S. economy back to full employment and to not worry about inflation unless prices rose in a persistent and troubling way.

Gold prices struggled for traction as elevated Treasury yields eroded the allure of bullion as an inflation hedge.

The dollar hit fresh three-year lows against the pound and commodity-linked currencies including the Canadian, Australian and New Zealand dollars, which are expected to benefit from a pick-up in global trade as growth rebounds.

MSCI’s gauge of stocks across the globe gained 0.12%, as rising stocks on Wall Street pushed the global benchmark to reverse early losses.

Shares of GameStop Corp (NYSE:), at the center of a volatile retail trading frenzy moves in late January, more than doubled in price in late trading and continued to soar in heavy, post-market trade.

The U.S. Food and Drug Administration said on Wednesday Johnson & Johnson (NYSE:)’s one-dose COVID-19 vaccine appeared safe and effective in trials, paving the way for its approval for emergency use as soon as this week.

Johnson & Johnson rose 1.3% following the news, seen as another boost to a strong recovery.

(This story corrects to add dropped word in headline)