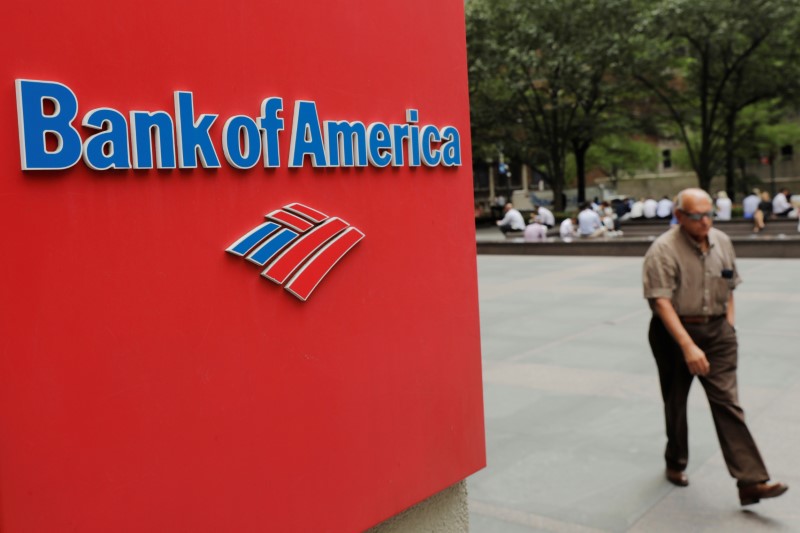 © Reuters. A man walks past a Bank of America sign in New York

(Reuters) – Bank of America Corp (NYSE:) posted a drop in fourth-quarter profit on Tuesday that still topped Wall Street expectations and pointed to signs of an economic recovery as the pace of consumer spending gathers steam. Underscoring its confidence in the economy, the bank joined peers JPMorgan Chase & Co (NYSE:) and Citigroup Inc (NYSE:) in releasing some of the cash it had set aside to cover coronavirus-driven loan losses.

“In the fourth quarter, we continued to see signs of a recovery, led by increased consumer spending, stabilizing loan demand by our commercial customers, and strong markets and investing activity,” Chief Executive Officer Brian Moynihan said.

Progress on COVID-19 vaccines and billions of dollars in stimulus position the bank well as economic recovery continues, Moynihan added.

The second-largest U.S. bank by assets, however, reported a 13% fall in consumer banking revenue to $8.2 billion, citing a hit from lower interest rates.

Lower rates have limited how much banks can charge for their lending services at the same time fiscal stimulus programs and flagging consumer confidence have softened loan demand.

Net interest income at the bank, a key measure of how much it can make from lending, tumbled 16%. The bank reported a 10% fall in overall revenue, net of interest expense, to $20.1 billion.

The lender relies on higher interest rates to drive its profit growth as it has a large pool of deposits and rate-sensitive mortgage securities.

Analysts on average had expected a profit of 55 cents per share, according to the IBES estimate from Refinitiv, helped by lower credit costs.

The bank released $828 million from its credit reserves for bad loans after adding more than $8 billion through the first three quarters of the year.

Its sales and trading business was a bright spot, with revenue rising to $3 billion from $2.8 billion a year earlier, mirroring that of peers JPMorgan Chase & Co and Citigroup Inc.

Wall Street banks have seen a surge in trading revenue in 2020 as they benefited from volatility in financial markets.

Separately, the second-largest U.S. bank said its board approved a $3.2 billion share repurchase program in the first quarter after getting a green light from regulators to resume buybacks last month.