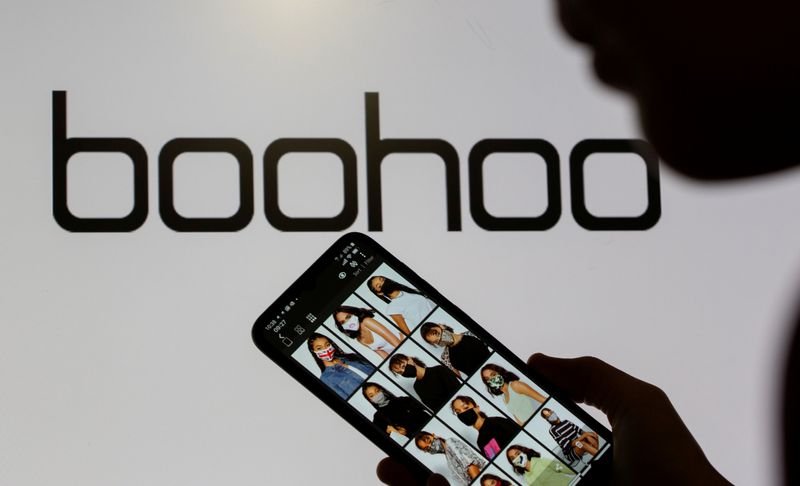 © Reuters. FILE PHOTO: A woman poses with a smartphone showing the Boohoo app in front of the Boohoo logo on display in this illustration

LONDON (Reuters) – Britain’s Boohoo defended its supplier practices again on Tuesday after a Sky News report said the online fashion retailer faced the possibility of a U.S. import ban due to allegations over the use of slave labour in supplier factories.

It quotes Jepson as saying Boohoo is not doing enough to stop forced labour in the factories in Leicester, central England, which supply many of its clothes.

Last September Boohoo accepted all the recommendations of an independent review which found major failings in its supply chain in England after newspaper allegations about working conditions and low pay, and set out steps to tackle the problems.

The group, which sells own-brand clothing, shoes, accessories and beauty products targeted at 16- to 40-year-olds, said that over the past eight months it has been working closely with UK enforcement bodies.

“It is important to note that auditors and investigators who are forensically examining suppliers in Leicester have found no evidence of modern day slavery,” it said in a statement.

Boohoo said it has not been notified of any investigation by U.S. CBP.

“We are confident in the actions that we are taking to ensure that all of the group’s products meet and exceed the CBP criteria on preventing the product of forced labour entering the U.S.,” it said.

“We will work with any competent authority to assure them that products from our supply chain meet the required standard.”

In November Boohoo appointed retired judge Brian Leveson to independently check its “Agenda for Change” programme, which implements the recommendations of the independent review.

“The group continues to make excellent progress as it works to implement the review’s recommendations and improve our supply chain in Leicester,” it added.