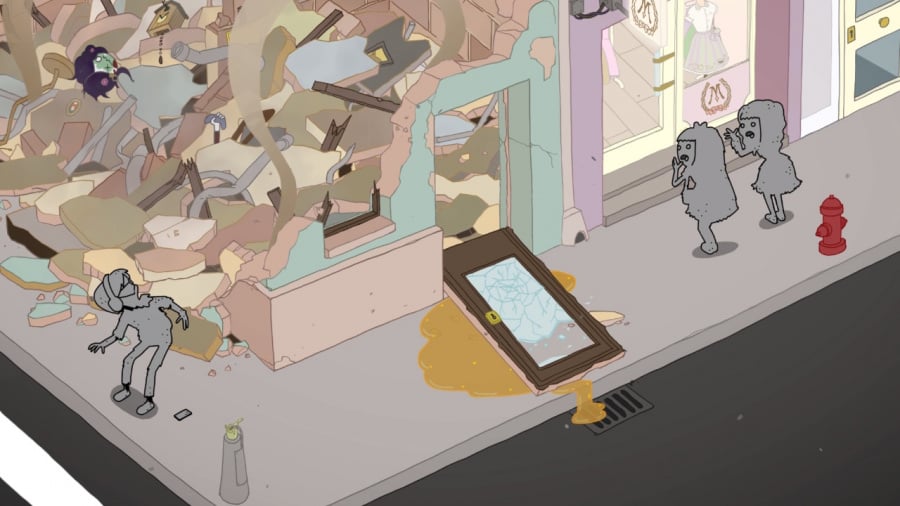 The idea of running amok in a giant mech is certainly a tantalising one, isn’t it? With Mango Protocol’s Colossus Down, this is exactly what seven-year-old child prodigy Nika decides to do. Following on directly from 2015’s short title MechaNika, Colossus Down is a 2D side-scrolling brawler in which you must destroy anything and everything that Nike deems is ‘not awesome’. It’s a neat idea that’s ultimately squandered by bland, repetitive gameplay and wholly unliveable characters.

Nika’s mission to rebel against humanity – and all it encapsulates – is bemusing, at best. Without the context of the previous game to explain why she’s decided to embark on her quest of destruction, Nika’s character just comes across as petulant and, well, evil. Playing as the bad guy isn’t necessarily a bad thing, and given the right motivations can actually result in a compelling character arc, but Nika just isn’t given anything to work with; she’s an angry child, and that’s about it.

Controlling Nika’s mech is fairly straightforward, and is initially pretty fun. Naturally, you can run and jump, although for some reason, you’re unable to actually jump on top of obstacles such as cars or barricades; instead, Nika will just sort of fall through them. In terms of your weaponry, you can use your fists to whack your enemies, electrocute them, or fire rockets. Annoyingly, each and every enemy is a bonafide bullet sponge; it takes an absurd amount of hits to take down even the most harmless of foes, and this is where the repetition really kicks in.

It quickly becomes apparent that the combat mechanics introduced during the first mission or so are about as in-depth as the gameplay will ever get. Most encounters from there descend into mindless button-mashing affairs with little to break up the monotony. You can slide and dodge enemy attacks, and you’re also kitted out with coolant to regain some of your health, should you take a few too many attacks. The gameplay is responsive and frenetic, but ultimately far too shallow to keep your attention for long.

From a presentation point of view, Colossus Down is a resounding success. Its visuals aren’t mind-blowingly spectacular, but the art style is incredibly fun and the violence on display is often hilariously over-the-top. The supporting cast consists of some bonkers recreations of real-life people, including an early boss character that’s blatantly a recreation of Donald Trump. Coupled with an upbeat, funky soundtrack and impressive sound design, the game absolutely looks and sounds the part.

With a bit more variation to its gameplay, Colossus Down could have been an easy recommendation. Despite its unlikeable main protagonist, there’s a heap of potential here that could well be realised if the developer decides to go for a sequel. As it is, it’s a great looking game that unfortunately falls foul to repetitive and shallow gameplay.

It Seems Game Builder Garage Will Be Digital-Only In Europe

Random: Did You Know Link Can Ride On Giant Barrels In Zelda: Breath Of The Wild?