Holly Willoughby looks like a movie star in a stunning dress on the opening episode of Dancing On Ice 2021.

The stunning presenter is dazzling viewers in the delicate pink gown.

Holly looks absolutely STUNNING! And anyone who complains to Ofcom about a bit of cleavage needs to put their head firmly in the oven. #DancingOnIce

Ahead of the show going live, the 39-year-old shared a glimpse of the designer number on Instagram and wrote: “Gosh it feels good too put a sequin on.”

Holly is known for her stand out Dancing On Ice wardrobe – so of course we expected nothing less this year!

She has host has worn a number of exquisite designs on the hit ITV reality series since it started back in 2006.

From beautiful bodices to lovely low cuts, we take a look at the presenter’s best fashion moments to date.

Giving us a sneaky glimpse into her 2021 wardrobe, Holly stunned in this bridal inspired number.

Meanwhile, a sheer wisp of fabric was perfectly positioned over her shoulder.

Showing off the look on Instagram, she said: “It’s always a privilege to step into a gown like this. I’m so looking forward to what’s to come…”

Back in December 2019, the mum-of-three looked incredible as she took to the ice with co-host Phillip Schofield.

The full-length red dress was complete with a black bow and simple heels.

And while fans loved the Rebecca de Ravenel, the £1425 frock proved a little pricey.

Holly pulled out all the stops for last year’s finale, where she wore a breathtaking Lee Petra Grebenau design.

The dress was heavily embellished with a series of shimmering diamonds and crystals, which sparkled underneath the studio lights.

In addition, she added soft waves to her signature blonde hair.

And while the gown covered her feet, she was rocking a pair of Sophia Webster heels underneath.

The dazzling black dress was fitted with feather detailing and a sheer plunging bodice.

Read more: Graham Bell pulls out of first week of DOI after partner is injured

Meanwhile, for the opening weekend of 2020, Holly turned heads in a peach-coloured dress from Joao Rolo Couture.

The couture gown was complete with feathered sleeves and a daring thigh-high split.

In addition, the dress also featured silver embellishment and a slight ruffled gathering.

Commenting on the look, one fan said: “Wow an angel!”

However, Holly opted for a slightly edgier look for the show in 2019.

This Versace number went down a storm with the star’s fans, with one saying: “You look beautiful as always.”

It featured a low neckline and statement straps, while her blonde locks were loosely curled.

And didn’t she look gorgeous?!

For the 2018 launch, Holly hosted alongside Phil in this floaty maxi dress.

Kicking off the series in style, the stunning blue dress was a design by fashion fave Suzanne Neville.

As well as a Grecian-style cut, it also had an elegant neck-tie and open front.

Gushing over the dress on Instagram, Holly wrote: “Literally living the dream.”

Another incredible look of Holly’s was this couture gown by Nedretta Ciroglu.

The angelic dress was fitted with feathered sleeves and stunning sequins.

She completed the oufit with jewels by Anoushka Jewellery and Prada heels.

Undeniably one of her best looks to date!

The multi-coloured asymmetric number was a risk for the presenter, but it definitely paid off!

She finished off the sequin look with a pair of silver heels. 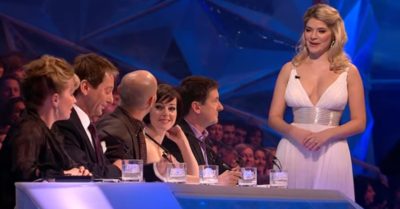 However, the white Grecian dress compete with a plunging neckline, wasn’t without some critics.

Speaking about the dress, Holly once said: “It was just a lovely elegant dress.

“Maybe it stood out because it was white.”

Leave us a comment on our Facebook page @EntertainmentDailyFix and let us know what you think of this story.

What happened at Chernobyl and is it safe? Can I still watch HBO drama?

is there a link between the women?

Where is Jane Andrews now? She killed Tom Cressman in 2000