Last week I had to write an apology letter for the way I said something. It wasn’t the first I’ve written in my life and it probably won’t be the last. I stand by the ideas I expressed and I feel I was treated unfairly in the situation. But in the end, I still owed an apology because the way I handled speaking my mind was inappropriate. 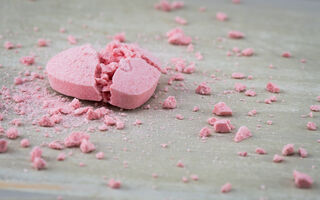 A crushed candy heart with bits

Writing the letter was really painful. My offense actually happened months ago and even though I carried regrets about it, I had been able to ignore dealing with what I had done. I downplayed how much my behavior had negatively affected other people and I convinced myself we were all just happier moving on. But recently, a secondary small event transpired to show me how ineffective my avoidance of the problem was. People were still hurt and it was my fault. Sitting down to write the letter meant reckoning with feeling guilty. That meant facing, instead of avoiding, my fault in the situation. I had to step letting the fact that I felt like a victim rewrite how I dealt with my own actions.

Like me, most people have pretty robust tendencies to avoid feeling bad about themselves. We blame other people for mistakes, we downplay how severe our mistakes are, and we ignore our weaknesses in favor of focusing on our strengths. My behavior in avoiding my mistake was straight out of the textbook. The catch is that people behave this way—defending their self-esteem—without realizing they are doing it or why. The threats to how we feel about ourselves can be legitimate or illegitimate, but we can’t easily tell the difference because we are so strongly inclined toward self-protection.

Sometimes this type of defensive behavior is ascribed to a select few number of people, and these few people are viewed as highly narcissistic. Back when I was in graduate school, I conducted a systematic field-wide review of how people react to threats to themselves and this paper is still one of the most academically influential ones I have written. The most consistent finding of this project was that people with high self-esteem—not just narcissists—do the things like ignoring their mistakes, blaming others for their negative feelings, and denying fault. The problem is that self-esteem has increased so much—and become such a focus of attention in our culture—that most people now have high self-esteem. I know this sounds strange. How can nearly everyone be considered high on something? Think about it not as a relative difference but a score. It doesn’t really matter whether you are higher or lower than someone else—if you have a certain score, you’re probably going to be a person who (like me) pushes your faults to the side when you start to feel bad. Bottom line, most people have this tendency to react to their faults in defensive ways. Unlike people with high self-esteem, other people react to their faults more slowly and thoughtfully.

Here’s the problem with being one of the many people who have high self-esteem. Pushing your faults aside hurts others. And it hurts yourself. Negative affect plays a key role in our daily lives. In the self-regulation literature, we see over and over again that negative affect (feelings like sadness, guilt, and anger) tell us that something in the world is misaligned with what we expect. In many cases, it means we are in a moment that is inconsistent with the kind of person we want to be. And many times, we are in that moment because we made up excuses for our current or past behaviors, often without even realizing it.

These moments of negative affect are meant to snap us back to reality. If we don’t use those feelings to reconsider our behaviors or where our values have taken us, we’re setting ourselves up to keep hurting others and ourselves. We can end up on a hedonic treadmill—managing the way we think about events just to make ourselves feel temporarily better but then constantly needing to keep telling us stories about why things are happening because we never learn the lessons that keep us from making mistakes that need to be managed to make ourselves feel better.

Guilt is no fun, but it serves the role of pruning the parts of us that are not serving us or others well. Feeling bad is a part of being human and one of the best gifts we can receive to shock our system into realizing something we’re ignoring is happening and a problem. When you realize you are feeling it, try not to rush past it. You might recognize that an emotionally charged moment isn’t the best time for self-reflection but make a commitment to come back to it. When you’re ready, the best way to move forward is to try to step back and view your situation as an observer. Then apply your insights into action. Just like getting off a treadmill can help you catch your physical breath, facing the faults you might carry for negative affect can help you catch your breath from the hedonic treadmill, and might even be the thing that helps you feel a longer-lasting and deeper sense of self-worth and value.

One final and important caveat: Not all negative feelings can or should be managed on your own. If you find yourself struggling with mental health, this website has a directory of mental health care providers that you can use to find help in your area. I encourage you to do so.