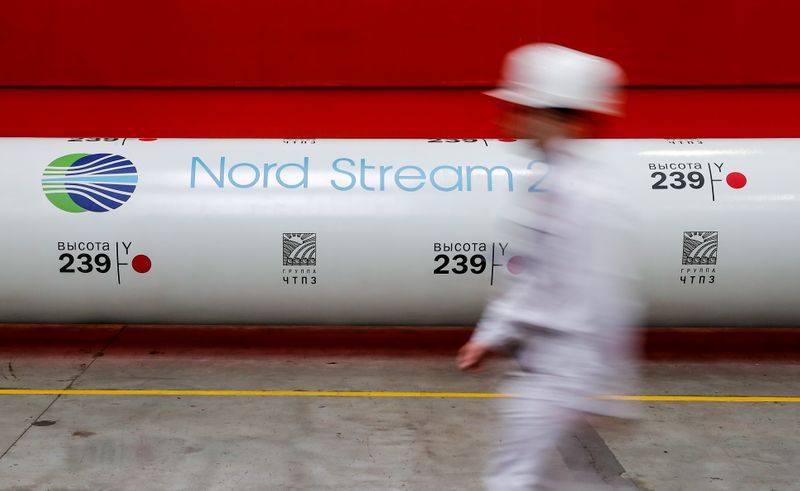 © Reuters. FILE PHOTO: FILE PHOTO: The logo of the Nord Stream 2 gas pipeline project is seen on a pipe at Chelyabinsk pipe rolling plant in Chelyabinsk

WASHINGTON (Reuters) – Baker Hughes Co and AXA Group and 16 other companies recently wound down work on Russia’s Nord Stream 2 pipeline and will not be sanctioned, according to a document the Biden administration sent to Congress last week which was seen by Reuters.

Russian energy company Gazprom (MCX:) and its western partners are racing to build the pipeline to take Russian gas to Germany under the Baltic Sea, and hope to finish it this year. President Joe Biden believes the pipeline is a “bad deal” for Europe.

Many U.S. lawmakers and officials say the pipeline would increase Russia’s political and economic leverage over Europe. The $11 billion pipeline, which would double the capacity of its existing duct, would bypass Ukraine through which Russia has sent gas to Europe for decades. That could deprive Ukraine of lucrative transit fees and potentially undermine its struggle against Russian aggression.

The United States, the world’s top gas producer, also would like to export liquefied natural gas to Europe as an alternative to Russian gas.

A few of the companies, including Norway’s verification company DNV GL, and insurers Zurich Insurance, Munich Re, had already said they dropped out after U.S. pressure.

German engineering group Bilfinger said in January it had withdrawn from work on the Nord Stream 2 gas pipeline, on concerns about looming U.S. sanctions.

The U.S. State Department told Congress on Friday it had designated the Russian ship Fortuna and its owner, KVT-RUS, for helping to build Nord Stream 2 under sanctions law that took effect this year. But the two had already been sanctioned by the Trump administration under previous law, and opponents of the project in Congress said sanctioning them again would not stop the pipeline.

Last week U.S. representatives listed 15 ships that are “possibly engaged” in laying pipelines or related activities since Jan. 1 when the latest U.S. sanctions became law, including the Russia flagged vessels, the Ivan Sidorenko, and the Murman.

Ned Price, the State Department spokesman, told reporters this week the fact that the companies quit with sanctions looming “demonstrates that the legislative goals and our actions are having a good effect.”

He said the State Department continues to “examine entities involved in potentially sanctionable activity.” Price has also said “sanctions are only one” of many tools in response to Nord Stream 2.

Here is the full list of companies according to the document: