For Want of a Nail: Accident and Human Evolution 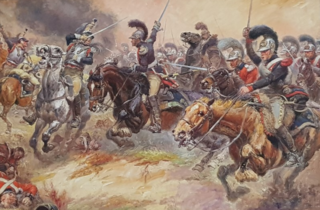 Charge of the French cuirassiers, Waterloo

The course of a human life, or of a society’s evolution, can appear to be a series of accidents or random coincidences that with hindsight have directed people, nations, entire cultures, in unexpected ways.

Examples include the charge of Marshall Ney’s cavalry which allowed Ney to seize the British cannons at Waterloo; a Colonel Heymès, fearing a counter-charge, ordered the cannons spiked with nails usually issued for the purpose—but someone had forgotten to provide the nails. When Ney’s cavalry was forced back the cannons were turned against Napoleon’s troops, who lost the battle as a direct result.

Another example is the attempted assassination of the heir to the Austro-Hungarian Empire’s throne in Sarajevo in 1914, when a bomb meant to blow up his coach hit the following carriage instead. The bomber’s co-conspirator, Gavrilo Princip, happened to be in a neighboring street when Archduke Ferdinand’s cortege, diverted because of the bombing, put him in the Archduke’s path, allowing Princip a clear shot at both Ferdinand and his wife, thus triggering WWI.

Finally, among myriad other examples, we can cite the typhoons that at different times destroyed Mongol fleets sent to invade Japan, ensuring the development of an independent Japanese identity and nation; and the unusually harsh winter that sickened Tamerlane and prevented his horsemen from taking over China. Against such defeats one can count the success of the 1944 D-Day invasion, a tremendously complex operation that nevertheless came close to failing because of poorly understood weather patterns.

Yet humans, whether working stiffs or industry tycoons, data clerks or generals, continue to live and act as if they can neutralize the random and plan the evolution of a shopping trip, a business model, an invasion, with every expectation of success, despite the experience of similar enterprizes that failed for unimagined reasons.

Where does this structural optimism originate? Why don’t we live our lives in awe of everything we don’t know about the world around us? Why don’t all humans react like Alvy Singer’s character in Annie Hall, who when brought as a child to a psychiatrist because he was depressed and not doing his homework, argued “The universe is expanding … it will mean the end of everything … what’s the point?” (To which his mother replied angrily, “Brooklyn is not expanding!”)

We teach beginner humans that our lives are controllable as long as we follow certain rules and procedures, and that such control in turn guarantees a good life. The carrot-and-stick approach to learning, whether it be at a parent’s knee, in kindergarten, or in high school, is aimed principally at reinforcing that lesson. The stove is hot, if you don’t touch it you won’t get burned. If someone spots you on the trampoline you won’t break your neck, if you learn your driver’s-ed handbook by heart you won’t hit another car and die. Do your math homework and you will not only survive but achieve success in a capitalist society. What is not taught is the almost infinite number of ways you can get burned, or the daunting statistics of car crashes, or the massive probability an ordinary Joe or Joelle won’t improve their lot in today’s America. What is not emphasized is that our universe and every atom in it may eventually disaggregate into heat-death, so what’s the point of doing anything?

But the reasons for our inveterate and often irrational optimism in the face of objective ignorance go deeper than child-care or driver’s ed. Research by David Hecht of University College, London, on subjects presenting feelings of optimism or pessimism based on which hemisphere of the brain was stimulated or engaged, has shown that optimistic feelings and traits seem to be associated with the left hemisphere (and thus right hand, right eye, etc.), whereas pessimism tends to correlate with the left hemisphere. Planning and sequential thinking tend to occur in the left hemisphere, and therefore one easy explanation for the relative preponderance of optimism in that hemisphere is that we need to imagine positive outcomes for any given plan or future process—otherwise, as Alvy Singer might say, what would be the point in planning? Either way, when it comes to planning and associated outlooks, a higher confidence in agency, and the related downplaying of all the unknowns that could affect our actions, may well be the result.

The effect described above might be reinforced structurally by the way perception works. For example, our auditory system picks up sound data from our environment, and transmits those data through neural channels (the afferent system) to the brain, which analyzes the information. However, says Dr. Jennifer Melcher of Massachusetts Eye and Ear Infirmary in Boston, another “efferent” system—also known as feedback—exists to transmit messages in the other direction, from brain to senses; these messages consist of orders telling our ears how to listen and what to listen for. More specifically, according to Dr. Melcher, the heart of the auditory system, the Organ of Corti, contains one row of microcilia–small hairs that vibrate to incoming sound–but four rows of microcilia dedicated to feedback. To the extent that this is true for all our senses it implies, in neural terms, that our brain spends at least as much time looking for what it already thinks it will find as it does scanning for the unknown. This could mean that our brain is structurally built to look for more controllable outcomes than random ones.

While it would be impossible for a human consciously to process all sensory input—by some estimates, our brains receive over 11 million discrete bits of sensory data every second, and process only 50—the importance of this selection process means we are physically conditioned to ignore the multiplicity of data that we can’t imagine and cannot control, and focus on information we can. This was a possibility intimated by the politician Meno who argued, against Socrates, that trying to find an answer logically implies some notion of what that answer must be. (Socrates didn’t buy it.) Either way, a belief—possibly exaggerated—in human agency may be part of that package.

Another issue raised in the context of control over accident is that of identity. We’ve all experienced the feeling of being driven by radically different moods, almost different personalities, which alternate according to levels of fatigue, satiety, blood sugar, physical desire, emotional need or a thousand other elements in our makeup. Modern theories of personality—such as the TESSERA model, which focuses on environmentally driven recursive sequences including ‘triggering situations,’ expectancy, and states–posit that environmental stimuli are key factors in determining who we are at a given moment. While a recognizable personality must result because of the quantity, complexity and continuity of input, these different drivers of identity often alternate at the wheel for no conscious reason, adding a whole new level of randomness to our daily lives.

Which can have material effects. The slight high of caffeine might well have made the difference in Joe Lott’s decision to be late for his Twin Towers meeting on 9/11 in order to please a friend. A personal grudge held, say, by a scout against her or his commanding officer in a war zone, reinforced at the expense of his or her more rational side by fatigue, fear or hunger, might result in the scout’s paying less attention to signs of ambush, leading to the patrol’s annihilation. Less dramatically, the counsel of friends, the mix of alcohols, the presence or absence of liver and brain enzymes on a particular night will affect an individual’s choice of whether to go home with a stranger met at the local bar, or not—with all the possible downstream effects such a choice entails.

Next–Part Three: the uses of accident

Should You Be Self-Employed? | Psychology Today

How you may Unintentionally Discriminate with your Behaviour

Decode the Message in Your Child’s Behavior

Does the entrepreneur’s motivation determine his well-being?