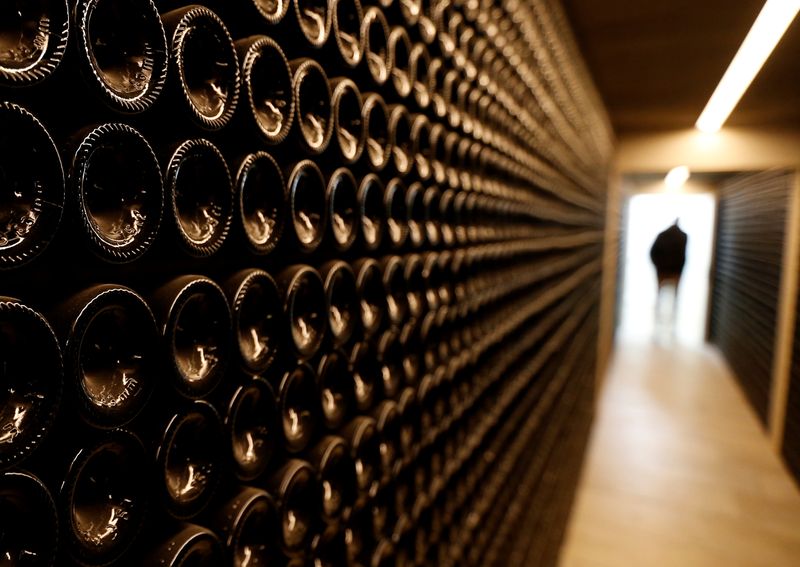 © Reuters. FILE PHOTO: Bottles of red wine are seen in the cellar of Chateau Le Puy in Saint Cibard

PARIS (Reuters) – The U.S. decision to impose additional tariffs on French wines and cognac, which come in addition to a first set of tariffs late last year, will cost the sector a total of over 1 billion euros ($1.23 billion), the French wine exporters’ federation said on Thursday.

The U.S. government on Wednesday said it would raise tariffs on certain European Union products, including wines from France, the latest twist in a 16-year battle over aircraft subsidies between Washington and Brussels.

Washington had already imposed additional tariffs of 25% on French wine in October 2019, among an array of EU food, which FEVS said had cost the sector 600 million euros ($737 million) over a year.

“The overall impact (of the October 2019 taxes and those decided on last night) will be over one billion euros for the entire wine and spirits sector,” Cesar Giron, president of the Federation of Wine and Spirits Exporters (FEVS), told Reuters.

“This is a real sledgehammer blow in a fight which has nothing to do with us,” he added.

He also said the impact of the new taxes on cognac sales in the United States would be “major”.