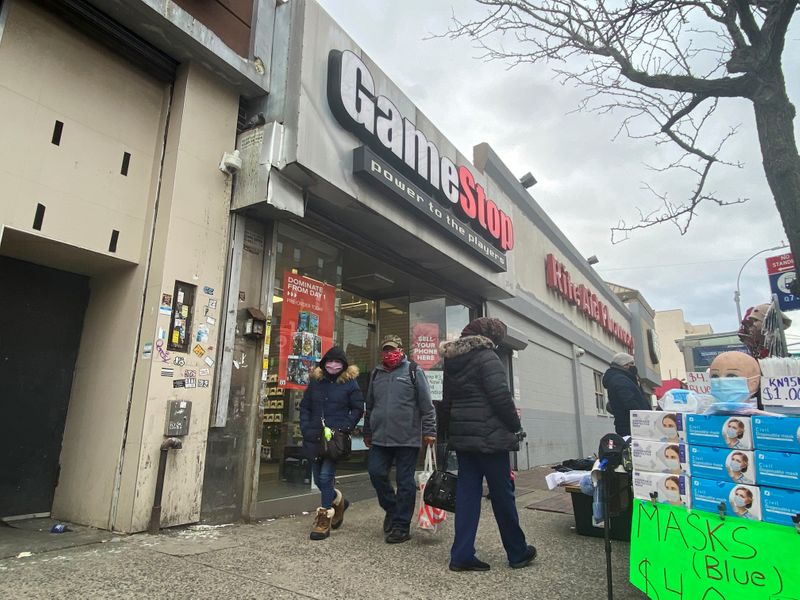 (Reuters) – The U.S. Securities and Exchange Commission waded into the battle between small investors and Wall Street hedge funds, warning brokerages and the pack of social-media traders that it was watching for potential wrongdoing.

GameStop (NYSE:) shares jumped, awarding retail investors the advantage in the latest round of their week-long slugfest against major financial institutions that had shorted the video game retailer.

The so-called “Reddit rally” has inflated stock prices for GameStop and other previously beaten-down companies that individual investors championed on social media forums including Reddit.

GameStop surged 51% on Friday after brokers including Robinhood eased some restrictions on trading. On Thursday, GameStop shares had fallen following the curbs imposed by Robinhood and other trading apps, which drew outrage from politicians and calls for action from regulators.

Robinhood said on its blog late on Friday opening new positions is currently allowed but limited in 23 securities, including GameStop.

Headphone maker Koss Corp was up 77%, although it and GameStop remained below peaks reached earlier this week.

Hedge funds and other short sellers had a bruising week. GameStop short sellers endured mark-to-market losses of $19.75 billion so far this year, according to S3. Even so, the stock remained highly-shorted with $11.2 billion short interest.

The SEC, traditionally cautious with public pronouncements, issued a rare joint statement from its acting chair and commissioners. It said it was working closely with other regulators and stock exchanges “to protect investors and to identify and pursue potential wrongdoing” and would “closely review actions … that may disadvantage investors” or hinder their ability to trade stocks.

The battle has roiled equity markets as funds were forced to sell some of their best-performing stocks, including Apple Inc (NASDAQ:), to cover billions of dollars in losses on short positions. The benchmark was last down 1.6%. ()

Volume has been heavy this week. The Reddit stocks have accounted for as much as 7.6% of total U.S. equity volumes, according to Piper Sandler (NYSE:) analyst Rich Repetto.

“The markets were vulnerable to a decline … and this Reddit activity was the catalyst that sort of triggered the sell-off,” said Sam Stovall, chief investment strategist at CFRA Research.

On Reddit forum WallStreetBets, whose almost 6 million members are seen as having driven the trading, GameStop and AMC remained overwhelmingly favored.

But many of those favored stocks were off their highs. AMC Entertainment (NYSE:) rose 46% and Express added 21% on Friday. Virgin Galactic was up 5%, Bed Bath & Beyond (NASDAQ:) was flat, and Nokia (NYSE:) reversed course to trade lower. American Airlines (NASDAQ:) fell 6% after a rally the prior session.

Since the start of the week, Blackberry (TSX:) Ltd more than doubled to touch a peak of $36 on Wednesday before easing back to $20.39 on Friday. () Silver continued a blistering rally.

Some companies that have been mentioned in the WallStreetBets forum are pouncing on the opportunity to raise capital.

Online brokers’ restrictions were driven by the high concentration of risk in hot stocks and by increased clearinghouse capital and deposit requirements, Piper Jaffrey said.

Robinhood eased some restrictions on Friday, but was still not allowing purchases of fractional shares in GameStop and 12 other companies, meaning smaller investors must bet more to buy-in. The brokerage was also limited the number of shares any one account could hold, further hampering players with existing positions.

Noted short-seller Andrew Left, who runs Citron Research and sparked the slugfest with his call against GameStop, on Friday turned his back on publicly detailing companies’ shortcomings, capping a week of intense backlash against him and others. [L1N2K41KD]

For a full list of Reuters stories about the GameStop phenomenon, please see:

AN EVENTUAL ‘RACE FOR THE EXITS’?

The current battle could limit short-sellers’ influence on some stocks, but high-flyers may eventually retreat from lofty valuations, analysts say.

“You have some people on Reddit message boards who clearly know a bit about what they are doing, and a lot of people who are just following on,” said David Starr, vice president of quantitative analysis at Simpler Trading.

“These moves … can go a lot further than people can expect, but they end with a quick move back down. People race for the exits very, very quickly.”

The chief executive of the London Stock Exchange said regulators should watch out for market manipulation.

The ranks of retail investors may have swelled in part because the coronavirus pandemic has left people stuck at home with extra savings.

Robinhood has been one of the hottest venues in the frenzy, but its sudden curbs on buying set off online protests as the firm tapped credit lines to ensure it could continue trading.

Robinhood temporarily disabled a feature on its app that allows users to buy crypto securities instantly. The brokerage said it had raised more than $1 billion from existing investors.

A website on the short squeeze strategy set up by one WallStreetBets participant, http://isthesqueezesquoze.com/, told traders with Robinhood accounts to “find a new broker asap,” listing Vanguard, Ameritrade and Fidelity.

Both Ameritrade and Charles Schwab (NYSE:) placed some restrictions on trade on Thursday. Fidelity says it has not limited trading in the stocks.