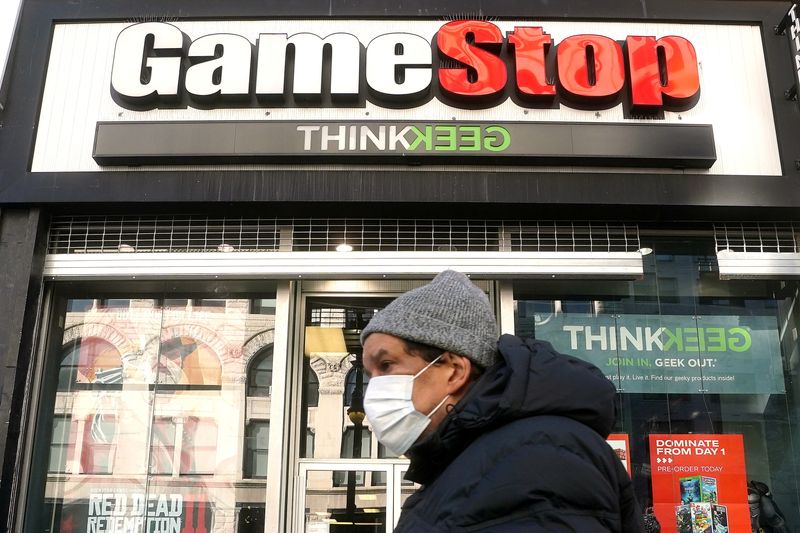 © Reuters. A person walks past a GameStop in New York

OAKLAND, Calif. (Reuters) – Social media services including Facebook Inc (NASDAQ:) and Reddit restrict discussions about weapons, drugs and other illegal activity, but their rules do not specifically mention another lucrative regulated good: stocks.

Some people think they should. Users of a Reddit group, in which 5 million members exchange investment ideas, generated significant profits by gorging on shares of GameStop Corp (NYSE:) and other out-of-favor companies that had been shorted by big hedge funds.

Investors have used social media for years. Anonymous posts have fueled cryptocurrency pump and dump schemes, according to studies, but that obscure market generated less scrutiny. The “Reddit rally” however, has roiled global stock markets and drawn scrutiny of posts in which thousands of smaller investors trade tips on platforms from Facebook to Instagram to Telegram and Clubhouse.

Individual investors won praise from elected officials and the general public for jabbing powerful hedge funds with a “short squeeze.” Yet critics have emerged, accusing social media users of manipulating markets unlawfully by pumping shares of weak companies. The manager of one Facebook trading community said she has turned down requests to tout individual stocks.

Social media companies are generally not liable for user activity under a statute commonly known as Section 230. Still, their rules bar illegal behavior like facilitating gun and drug transactions or distributing offensive content that could rile advertisers or generate calls for tighter regulation.

Section 230 also has some carve-outs that in theory could lead to a tech company being penalized for user-generated content, including violations of federal criminal law, said Jeff Kosseff, a cybersecurity law scholar who wrote a book on the law.

He noted that the bar is high. The speech itself would need to be a criminal violation of a law that explicitly specified distribution of that speech as illegal.

In addition, First Amendment precedents typically hold that the companies must have knowledge of criminal speech posted on their platforms in order to be held responsible for it, said Kosseff.

Identifying bad actors among the frenzy is a challenge. “There’s all of these feedback loops and incentives behind the scenes,” said Sinan Aral, director of the MIT Initiative on the Digital Economy. “We don’t know exactly who was in the crowd.”

The vast majority of traffic on Stocktwits, a social media platform for investors, appears to be people talking about stocks without evidence of manipulation, said Rishi Khanna, its CEO. He said the platform was not taking any extra moderation actions on this activity.

Although Reddit has stated platform-wide rules – including no illegal content or soliciting or facilitating illegal transactions – the service relies heavily on community-based moderation. Users who act as moderators make and enforce guidelines about what is permissible.

The founder of the WallStreetBets Reddit community Jaime Rogozinski, who was a moderator of the group until April 2020, said he tried to draw lines on what to allow. He said he and other moderators removed illegal attempts to game the market, such as claiming to have insider information. When there were gray areas, he said they played it safe.

“You’d have attempts for pumping up stock and I still to this day am not sure what the regulation was, but I never wanted to find out,” said Rogozinski.

Archived copies of the forum showed a ban on “market manipulation” topped its list of rules by April last year. The current moderators said they struggled to moderate the WallStreetBets group as traffic surged, briefly causing technical errors at Reddit this week.

A spokeswoman said earlier this week that Reddit would “review and cooperate with valid law enforcement investigations or actions as needed.”

Discord, which hosts many trading discussions, said its rules bar users from engaging in “any illegal behavior.” Discord on Thursday said it was working with the “Wallstreetbets” room team to moderate its new server, after removing the previous server over hate speech and misinformation. It did not address stock market influence.

A lack of closer scrutiny on the matter has left open the opportunity for potential manipulation. Former Merrill Lynch financial adviser Cassandra Cummings, 47, who now manages 80,000-member Facebook trading group The Stocks and Stilettos Society, said she declined multiple requests in the last year to rally her group around a specific stock.

“They know that I have the power through my group to move that company stock price,” she said.