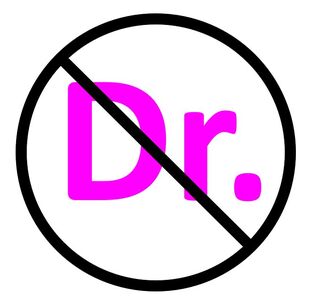 I can remember it so clearly. I had just earned my Ph.D. and was attending an academic conference. I was in a small group of three male Ph. D.s and someone approached our group. The introduction went like this: “This is Dr. Jones, Dr. Frentz, Dr. Stevens, and Audrey.” Hey, wait a minute; if we are going to play doctor, I want to play too. I worked nine years for the same degree, but I was left out of the recognition, a definite ding to my credibility and being recognized as a player. A symptom of unconscious bias at work would claim because I am a woman; I certainly did not have the same elevated status as the group’s men. It begs the question, “Is there gender bias in acknowledging women’s titles?”

The current flap regarding recognizing Dr. Jill Biden’s title is a case in point and testimony to gender bias. Nothing demonstrates this condescension better than a recent op-ed in The Wall Street Journal calling on first lady-to-be Jill Biden to drop “Dr.” as her title. Why? Didn’t we call Henry Kissinger, former Secretary of State, Dr. Kissinger? “‘Dr. Jill Biden’ sounds and feels fraudulent, not to say a touch comic,” wrote Joseph Epstein. “Your degree is, I believe, an E.D., a doctor of education, earned at the University of Delaware through a dissertation with the unpromising title ‘Student Retention at the Community College Level: Meeting Students’ Needs.'” His final insult was, “A wise man once said that no one should call himself ‘Dr.’ unless he has delivered a child. Think about it, Dr. Jill, and forthwith drop the doc.” The problem is people with far less education than Biden has delivered babies. It takes longer to get a doctorate in education than to become a registered nurse or a doula. Maybe Joel Epstein, an 83-year-old white male, is showing his old school bias. I don’t think back in his day there were many women around with advanced degrees.

In her article, What’s Really Behind The Flap Over Jill Biden’s Doctorate, Natalie Wexler, senior writer for Forbes, suggested criticism of Jill Biden for using the honorific “Dr.” has been snide, unfair, and another case of misogyny. The WSJ piece sparked massive outrage and push back on social media, with people calling it sexist, misogynist, and emblematic of the ways men question women’s credentials. Many women with PhDs added Dr to their names on Twitter in solidarity and used the hashtags #MyTitleIsDr and #DrJillBiden to talk about their experiences. Several medical doctorate holders came out in Biden’s support, crediting it “as valid as it gets,” and tweeted about how difficult and the number of years (9) it takes to get a Ph.D.

Michael LaRosa, a spokesman for Biden, called Epstein’s piece a “disgusting and sexist attack” and urged the publication to remove it and apologize. At the same time, Biden responded indirectly in a tweet, saying: “Together, we will build a world where the accomplishments of our daughters will be celebrated, rather than diminished.”

Bernice King, daughter of Martin Luther King Jr, recalled that her father also used the title Dr despite not being a medical doctor. Former First Lady Michelle Obama wrote on Instagram: “For eight years, I saw Dr. Jill Biden do what a lot of professional women do — successfully manage more than one responsibility at a time, from her teaching duties to her official obligations in the White House to her roles as a mother, wife, and friend.” Doug Emhoff, the husband of Vice President-elect Kamala Harris, wrote on Twitter: “Dr. Biden earned her degrees through hard work and pure grit. She is an inspiration to me, to her students, and Americans across this country. This story would never have been written about a man.”

Tania Lombrozo wrote an opinion piece for NPR, “Think Your Credentials Are Ignored Because You’re A Woman? It Could Be.” When she first became a professor, she was only 26 and female. She recalled that the combination made her anxious about whether students would take her seriously as a credible authority on the material she was teaching. She made a point of introducing herself as “Professor Lombrozo,” and she signed emails to students the same way — especially those addressed to Miss/Ms./Mrs. Lombrozo or those that used her first name. While teaching in academe, I observed first-hand how students would address the male faculty by Dr. and female faculty by more familiar titles such as their first name.

What we learn from these examples is the first step is to recognize gender-based disparities. Titles are essential for perceptions of credibility and, for women, critical to leveling the systematic sexism across all industries and businesses. Many women are motivated to earn Ph.D.s because it helps level the playing field and gives them a chance to earn the same income as a man with an undergraduate degree.

Newcastle could sack Steve Bruce after training ground bust up

Deliverr, operator of a shipping logistics platform for e-commerce in the US, raises $170M Series D led by Coatue, bringing its total raised to $240M (Alexandra Sternlicht/Forbes)