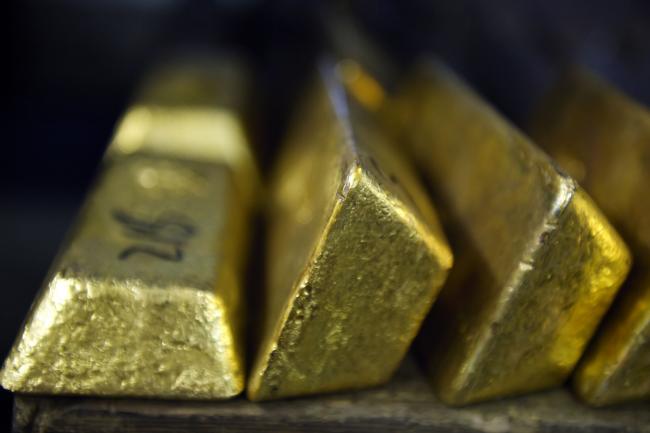 © Bloomberg. Gold bars sit in a vault at the Perth Mint Refinery, operated by Gold Corp., in Perth, Australia, on Thursday, Aug. 9, 2018. Demand for coins and minted bars was a little sluggish over the past year as Donald Trump’s earlier win in the presidential poll prompted investors to divert funds into stocks, bonds and property, said Perth Mint’s Chief Executive Officer Richard Hayes on Aug. 8. Photographer: Carla Gottgens/Bloomberg

(Bloomberg) — Gold extended declines on a stronger dollar and the currency’s outlook, while investors assess the timeline for the U.S. stimulus package.

Former Federal Reserve Chair Janet Yellen is expected to affirm the U.S.’s commitment to market-determined exchange rates when she testifies on Capitol Hill Tuesday, and she will make clear the U.S. doesn’t seek a weaker dollar for competitive advantage, according to a report from the Wall Street Journal citing people familiar with the preparation. The dollar has climbed in the past two weeks.

Yellen’s confirmation hearing as Treasury secretary is scheduled for Jan. 19 in front of the Senate Finance Committee, the day before President-elect Joe Biden is sworn into office.

Bullion has dropped about 4% this year as U.S. Treasury yields and the dollar advanced. Still, the metal is staying above $1,800 an ounce and is expected to receive support from massive stimulus packages from central banks and governments. Biden is pushing for quick congressional action on his economic relief plan, but he risks slowing it down with a federal minimum-wage increase that Republicans and business groups have long fought.

Meanwhile, as the U.S. death toll from Covid-19 neared 400,000, Anthony Fauci, the nation’s top infectious disease expert, said that Biden’s promise of delivering 100 million vaccine doses in 100 days is “absolutely a doable thing.” Vaccinations in the U.S. began Dec. 14 with health-care workers, and so far 13.7 million shots have been given, according to a state-by-state tally by Bloomberg News and data from the Centers for Disease Control and Prevention.