How Joe Biden Offers an Example for Moving Forward

It is stating the obvious, but in the wake of the attack on the Capitol, many of us are shaken and worried about the future of our country. Sadly, some are benefiting from the extreme division in America, or they believe that the country can only be restored with violence because we are too far gone in one direction or another. This level of conflict has grown because we have been talking past each other for decades and have aligned ourselves with opposing and rigid political philosophies in the cacophonous echo chambers of the information age. Our view of the ‘opposition’ is couched in negative terms and assigning motives that are almost always negative and judgmental.

We also tend to attribute a high level of intentionality to each other, probably more than we should. For example, we assume that all those who call themselves ‘capitalists’ are simply greedy or that those we label ‘socialists’ want everything to be given to them for free. We engage in a raging debate about who the real ‘freeloaders’ are. Yet people in the mental health and psychology-related fields know that motives can be mixed, out of our awareness, or buried under layers of defense mechanisms. In short, human intentionality is highly overrated.

We are much too quick to judge each other’s actions. I do it too. During the Capitol siege I watched a policeman jabbing a stick at the mob and running away. My first impression was that he was running away in fear, abandoning his post. Seeing the video later, I realized he was stopping every so often, perhaps to make sure they were following him. When he reached the top of the stairs, he looked toward where the legislators were seeking safety and led the mob in the other direction. He is now being called a hero. Only he knows what his true motives were.

Then there are those legislators who may have added to the fervor of the rioters by questioning the validity of the vote. Even after Congress was attacked, many voted against certification. Many are angry at them and see them as more concerned about their political futures than the fate of the country, but, in a way, I did the same thing. When the riots began, I removed a Black Lives Matter sign from my yard out of fear of recrimination. (I live in a mostly conservative area). My grandson and spouse were in the house and I couldn’t bear the thought of not being able to protect them. Ironically, when I informed her, she said she did not agree with removing the sign. The sign is going back up today, because (on reflection) she is right that this is a time to stand by our beliefs and deal with the consequences. I also will not belittle myself for my initial instinct to protect them and myself.

As much as I vehemently disagree with Senators Hawley, Cruz, and others, I can understand how they are in a similar position. They and their families might be in danger if they did an about-face now. Just ask Mike Pence, whose hanging was called for by some member so the mob. Clearly, I don’t know the complete array or relative strength of these politicians’ motives, and I’m trying not to judge. They bought into and pushed false arguments about voter fraud, etc., and perhaps misjudged the full implications of their actions. They also could be driven by the worst of motives. I simply cannot know. 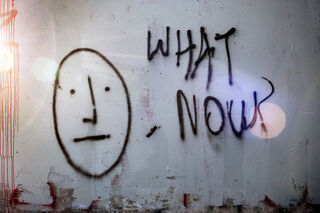 Enter Joe Biden, who has been saying for months that we should “Never question a man’s motives, question his judgment.” In a Fall 2010 interview, then Vice President Joe Biden said he learned that from Senator Mike Mansfield years before. This simple admonition has profound implications for our politics and interpersonal relations in general. This “Biden Principle” can improve our civil discourse and can guide us in our interaction on social media as well. If heeded, it provides the opportunity for the nation to begin healing.

Even Biden’s campaign style and strategy were lessons in psychology. He conducted a “non-campaign” by avoiding excessive self-promotion and relying on setting an example of presidential demeanor. He demonstrated how we can still pursue our goals by acting like we belong there instead of convincing others they can’t live without us. He’s showing our children that they don’t need to bully their way to the bully pulpit. This is aided by the fact that we can let them hear his speeches – unlike his soon-to-be predecessor.

Biden will not be a perfect president, but it seems that he will be a decent one. If Congress can work together during his tenure, great things can be achieved. But the greatest contribution will be the psychology he embraces and exemplifies. We don’t have to know his motives to understand much about him. He has suffered unbearable losses that gave him a perspective that few people have. He has a long history of working ‘across the aisle.’ Perhaps most importantly, he possesses a deep understanding of how government is supposed to work.

A Biden-inspired approach to life can be summed up in four simple tenants:

1) Don’t judge motives no matter how much you want to.

2) Don’t oversell yourself, and if you do, backtrack in a hurry.

3) Make sure you are a good fit for your life’s work.

4) Keep going, regardless of what life throws at you.

It may sound like I’m promoting our President-Elect in a political fashion and you may detect bias in this post. I believe that I’m trying to make this case because it’s good for America, and maybe even necessary for our survival. It is also possible that I have some sinister, selfish motive for writing this of which I am unaware. If any new motive floats up from deep within my psyche, I will be sure to let you know in a future post. Until then, my judgment on this is fair game.

Roblox is working on content ratings for games and on ways to make parental controls easier to find and use, to address sexual content issues on its platform (Julie Jargon/Wall Street Journal)