Sometimes the idea of a transfer window can be much more exciting than the reality, but it’s always fun to have a look at the situation surrounding certain teams.

There’s no doubt that Ole Gunnar Solskjaer has done a great job with Man United to turn them into title challengers again, but they will need to have a major summer if they want to push to that next level.

There’s a fine line to tread in terms of finances as United will have taken a hit due to the impact of covid-19, but it also means that transfer fees could be slightly reduced.

They still have a few areas of need so it’s understandable that they get linked with a lot of players, but you do see the same names popping up on a regular basis.

The defence has been an issue for a while and they still haven’t signed the ideal partner for Harry Maguire, so Fiorentina’s Serbian centre back Nikola Maksimovic looks like a solid choice.

A recent report from Football Italia indicated that United were in pole position to sign the big centre back due to his contract situation in Italy, while there would be hopes that he would have the all-round game and aggression to shore up that back line.

Jadon Sancho was regularly linked last summer and those rumours haven’t gone away, while a report from The Express has indicated that his teammate Erling Haaland is also being lined up as a target for United this summer.

There’s no doubt that those three would seriously improve the team, but you also have to expect that some players will need to be sold to make space in the squad and raise funds.

Paul Pogba’s situation has rumbled on for months now and it even seemed to inspire some brilliant form from the Frenchman, while a report from Goal has confirmed that his contract expires in 2022 and there’s no sign of an extension for now, so there’s every reason to think that he could move on.

If they were able to sign Sancho and Haaland then you have to think that they would go straight into the team and push Marcus Rashford into the left wing role on a permanent basis, so it would also be easy to see Anthony Martial moving on in the summer too.

The final situation that needs to be sorted out is between the sticks – Dean Henderson is going to need to play regular football eventually, and there are suggestions that one of them will need to leave in the summer.

Clearly de Gea is the more experienced option and it’s probably the low risk move to keep him, but you also have to question if he’s really playing at a level where he’s good enough for a team with title ambitions.

He continues to make mistakes and he doesn’t inspire confidence in the defence, so it could be time to cash in if there is any interest and hand the position over to Henderson next season.

There are a ton of moving parts here and obviously this is a big if, but here’s how United could line up next season if all of these actually happened: 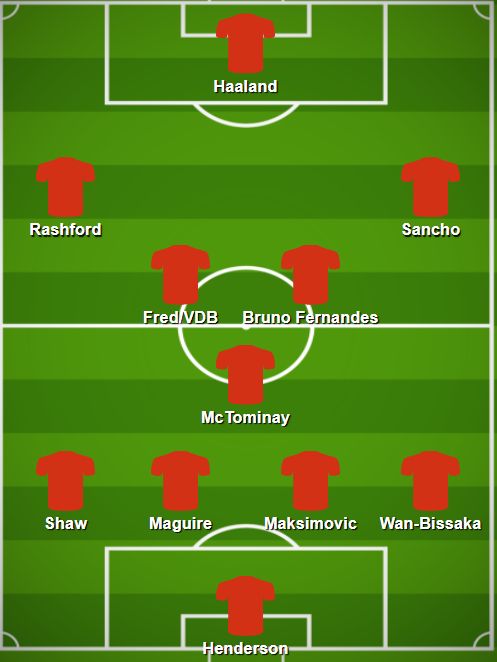 Scott McTominay continues to impress and get better so he’s approaching a point where he’s the automatic starter, while Fred and van de Beek could be rotated depending on the opposition and how attacking the team needs to be.

Ideally they would find a way to convince Pogba to stay and the whole team would look pretty complete, so it will be interesting to see how many of these things actually happen this summer.