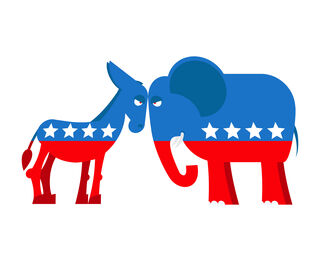 Do you know any fathers and daughters whose political differences are damaging or destroying their relationship—and are you one of them? If so, let’s look at why politics does more damage to fathers’ relationships with their daughters than with their sons. Especially in the midst of the nationwide upheaval and unrest surrounding the presidential elections of 2020, this is not good news for fathers or for daughters.

Over the past decade, our disagreements over politics have become more mean-spirited, more personal and more insulting than in the past.  For example, nearly one-third of voters believe members of the other party are not intelligent. Republicans tend to see Democrats as immoral and godless, while Democrats tend to view Republicans as close-minded and bigoted. (1)

But women are more likely than men to say that politics has created ill will in a relationship with a family member, according to  a 2018 American Psychological Association national survey (2)  Nearly one-third of adults felt this way. But the greatest impact was on women. Moreover,  daughters are expected to be more manageable and more agreeable than sons when it comes to accepting their parents’ political beliefs. So when daughters speak up publicly as activists or speak out in the family, it tends to be more upsetting than when sons do the same  (3)

There’s also more stress for dads and daughters because women are more likely than men to identify as Democrats.  In other words, fathers generally share more in common politically with their sons than with their daughters. Nearly 60% of women identify as Democrats or lean Democratic, versus only 44% of men. For Millennials, the number of Democrats increases to 70% for women versus 50% for men. (4)

The problem for fathers and daughters who belong to different parties is not simply that they vote for different candidates. It’s that their party affiliations usually reflect deeply held values on very personal issues such as interracial marriage, gay rights, and reproductive freedom for women. The day-to-day lifestyles of Democrats and  Republicans are further apart than ever—a reality that can stress father-daughter relationship even when they avoid discussing politics. (5)  Presidential election years can push these existing divides to a breaking point in personal relationships.

It’s interesting too that a daughter’s college education may contribute to greater political tension with dad. Women now earn 60% of undergraduate degrees. And a majority of college graduates identify as Democrats. (6)  So, if dad is not a college graduate, chances are he will have less in common politically with his daughter than with his son since sons are less likely than daughters to attend or to graduate from college. Then too, due to the risings costs of college, since 2015 more college students than ever are living at home with their parents. So when there are intense political tensions between them, living together is not good news, especially when the pandemic restricts everyone’s chances to escape from the family home.

Politically liberal daughters will be happy to learn that some research indicates that men with daughters tend to become more progressive than those without daughters. One study found that dads’ whose first child was a daughter expressed increased support for policies related to gender equality in the workplace. (7) Likewise, men whose first child was a daughter were more likely to vote for Hillary Clinton in 2016. (8) And in a North Carolina study involving middle-school children who took a course on climate change, daughters were more effective than sons at changing this dads’ views on the issue. In fact, the most conservative fathers were the most influenced by their daughters.(9)

Many father-daughter relationships have been damaged by 2020s’ political storms—storms that are more like hurricanes than short-lived, noisy thunderstorms. These family storms are not going to disappear in 2021.  In my most recent book, Improving father-daughter relationships: A guide for women and their dads, I offer a number of specific ways to keep father-daughter relationships afloat and repair the damage caused by political differences. And the bottom line is this: When fathers and daughters share very little in common politically and when tensions and emotions are high,  Do not, repeat, do not try to convince the other person to change their political views. Tempting as it might be, the “let me show you the facts and statistics proving that you’re wrong” approach seldom changes anyone’s views and often does even more damage to an already stressed relationship.

Kim banned from seeing Millie as she falls ill