How to Create a Monster 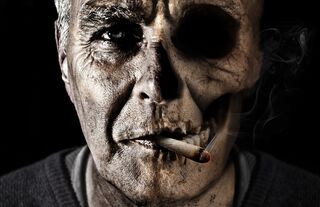 According to Forbes, horror movies gross around $1 billion a year, to say nothing of video games and other media. Not everyone pays for pure, undiluted horror, but many more people are able to enjoy horror hiding in other genres such as myths, fairy tales, fantasy fiction, and the news. The love of horror [Latin, ‘a trembling, a shaking’] is most common in male adolescents and is correlated with personality traits such as thrill-seeking and aggression.

The meat of horror is the monster [Latin, ‘bad omen’], from the great white shark in Jaws to the White Walkers in Game of Thrones, or any powerful, menacing character that would, if it could, threaten us or people like us—which is why the cannibalistic witch in Hansel and Gretel, who seeks to lure children, is far more frightening to children than to their parents, and why, in Ancient Greece, Scylla and Charybdis and the sirens would have been far more frightening to seafarers than to farmers.

An archetypal monster is not only terrifying but also revolting. Adapting the insights on impurity of the anthropologist Mary Douglas, the philosopher Noël Carroll, author of The Philosophy of Horror, argues that monsters often display one or more of four sometimes overlapping forms of impurity: categorical interstitiality, categorical contradictoriness, incompleteness, and formlessness.

Categorical interstitiality is when something is more than one thing. Greek myth is full of interstitial monsters such as the minotaur, the griffin, the chimera, the harpies, and the Gorgon Medusa.

Categorical contradictoriness is when something violates binary classes of existence, in particular, something that is both dead and alive, like the Night King, or something that is both animate and inanimate, like a haunted house or even, at a stretch, the Temple of Doom in Indiana Jones, with all its ancient and elaborate booby traps.

The ability to distinguish between animate and inanimate is acquired at just six months of age and is so basic as to be programmed into language. For example, English restricts the use of the present perfect tense (“has been”, “has seen”…) to subjects who are still alive, marking a sharp grammatical divide between the living and the dead.

Incompleteness is when something is missing parts, like limbs or an eye. In antiquity and later, people believed distant lands to be inhabited by headless men called Blemmyes (or akephaloi) with their facial features in their chest, and monopods (or skipods) with a single, central leg ending in a very large foot. In Homer’s Odyssey, Odysseus, the man of many twists and turns, famously blinds the cyclops Polyphemus, a one-eyed man-eating giant.

Finally, formlessness is when something lacks clears boundaries and therefore, as with interstitiality and contradictoriness, eludes simple categorization. Examples include werewolves, Dr Jekyll/Mr Hyde, and the blob.

Carroll adds that, for extra horrific effect, a monster may be magnified or massified, that is, made larger like Godzilla, or multiplied in number like the army of the dead in Lord of the Rings.

Many monsters also have a trait that Freud called “the uncanny”. In 1970, the professor of robotics Masahiro Mori posited the theory of the uncanny valley. He observed that, for the most part, our emotional response towards machines is fairly neutral, while our emotional response towards human beings and objects such as teddy bears is fairly positive. But if something looks almost but not quite human, it arouses negative feelings of eeriness and revulsion: the so-called uncanny valley.

How to explain this phenomenon? It could be that humanoids such as the Joker evoke death or illness. Or that they “mess with the mind” in some way—perhaps by violating norms and expectations, or by being deceptive and difficult to read. The Joker sometimes wears a flower that can shoot deadly venom: that a flower is normally harmless, even delightful, underscores his deeply deceptive nature.

Although they are the main meat, there is more to horror than monsters. Horror also gets to us in other ways, among others, by creating confusion, anguish, paranoia, and a general sense of mental breakdown or psychosis. But if the attempt is too blatant or clumsy, the horror risks turning to humor. Indeed, the horror writer R. L. Stine claims that horror always makes him laugh: “I always just wanted to be funny. I never really planned to be scary.”

But other than incidental humor, what’s in it for us? Horror excites our imagination and curiosity, notably through the exploration of taboos and the creation of suspense. It also invites and permits us to unleash our darker side, that is, our Freudian id or Jungian shadow. Shapeshifters such as werewolves and Dr Jekyll/Mr Hyde are commonly interpreted, in their different aspects, as the layers of one same person. Other monsters, often supervillains such as the Joker, are so overrun by their shadow that they are nothing but sheer darkness. These two factors, exploration and expression, are part of the appeal of horror, especially to younger audiences.

Another appeal of horror is that it is conducive to seduction and a horror movie is a popular choice for a teenage date. Young people are seeking to establish their identity, and, under cover of a horror movie, are able to act out alluring gender stereotypes and exploit the bonding and “cosiness” to which fear gives rise. One American study found that males enjoyed the horror movie most in the company of a distressed female, while females enjoyed it most in the company of a “mastering male”, and that mastery significantly increased the appeal of an initially low-appeal male.

But for most of its devotees, the overwhelming attraction of horror is, of course, the fear to which it gives rise. Fear and disgust are among the six basic emotions identified by the psychologist Paul Ekman, the other four being happiness, sadness, anger, and surprise. As I discuss in Heaven and Hell: The Psychology of the Emotions, basic emotions evolved in response to the ecological challenges faced by our remote ancestors and are so primal as to be “hardwired,” with each basic emotion corresponding to a more or less distinct and dedicated neurological circuit.

Still today, specific phobias are generally for the natural dangers that commonly threatened our ancestors, such as spiders (arachnophobia), snakes (ophidiophobia), and blood (hematophobia), even though in the modern world man-made hazards such as motor cars and electric cables are far more likely to strike us down. For most of our evolutionary history, our greatest fear was to become meat to a predator, to become someone else’s dinner. So when I swim in the sea in Mauritius, I am far more afraid of theoretical sharks than of the very real speedboats, even though I know that this is completely irrational.

Horror reawakens that primal fear of falling prey to a predator, and this can serve a number of functions. First, it can help us rehearse for danger, like children do when they chase one another and break our ears with their screams. Second, it can help us to confront and process past traumatic experiences by, in some sense, replaying them. Third, and most important of all, it can give us pleasure, if not quite in itself, then at least through the relief and release that follows in its train—and that can, you will have noticed, lead to laughter. When I visited the remote Cederberg winery in South Africa, more than 20 miles down a gravel track off the Cape-Namibia Route, I was given the key to a nearby cave complex with Bushmen paintings, which I proceeded to explore on my own, without even a telephone signal. I still remember the intense “joy-safety” that I felt upon returning to my car and shutting the door and shutting the door to all the deadly snakes and spiders that I had been imagining.

Negative emotions can become pleasant if their object is a mere simulacrum, which is partly why people turn not only to horror but also to things like rollercoasters and sadomasochism. And like horror, sadomasochism and rollercoasters can easily descend into laughter.