Maddison smashes Leicester ahead vs Southampton

James Maddison, take a bow! His finish to put Leicester City in front against Southampton was as emphatic as they get.

Leicester against Southampton has not oftentimes been considered a six-pointer in the race for European football, but this is a season like no season before, and both teams are right in the mix to finish in a European qualification spot.

The Foxes, who perhaps have the stronger credentials in terms of forcing themselves into that conversation, having qualified for the Europa League last time around, have started on the front foot against the Saints this evening. 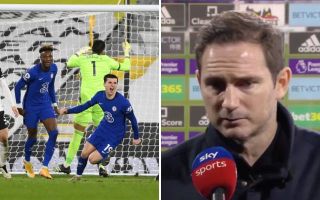 Just the one goal separated the two sides heading into the half-time break, but what a goal it was. James Maddison found the back of the net in style, shrugging off Jack Stephens before unleashing an absolute thunderbolt into the roof of the net.

Now THAT is how you finish in style. Absolutely un-saveable.

What a finish from James Maddison ?

He smashes it into the roof of the net to put Leicester in the lead and follows it up with some socially distant celebrations! pic.twitter.com/7QCQ42RvWB