Making the Most of Your Hidden Powers of Creativity

Evolution has given each of us a brain that is both large and flexible in how it deals with life’s challenges in the interests of survival. Thus equipped, we are not only able to meet — more or less successfully — the challenges of life head on. We are also clever enough to be able to dumb down the world we live in. Why? To make what we must deal with in life as predictable and generally benevolent as humanly possible.

None of us, however, is omnipotent or omniscient. The old chestnut “my brain is full” may be a comic expression, but there are genuine metabolic and practical limits to what the human brain can accomplish either on its own or with the help of others. Therefore, in the interests of efficiency and speed, it is not surprising that the brain as a biologically constructed survival tool favors the kind of knee-jerk thinking that can be simply described as categorical.

What is this way of thinking about things and the world we live in? To invoke a familiar saying, as magnificent as it is, the human brain is predisposed to accept without too much bother that if something looks like a duck, swims like a duck, and quacks like a duck, then it probably is a duck.

However, the world we live in is a relational world, not a categorical one. Despite what conventional wisdom may tell us, things do not simply exist first and foremost all on their own, and then only later become “connected with,” “linked,” “tied to,” “dependent on,” etc. other similarly “separate and distinct” things. More often than not, things are the way they are because they are connected with, linked to, etc. other things. 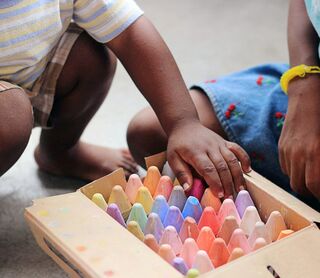 Thinking outside the box

It is easy to tell what is a raccoon from an aardvark or a zebra. When it comes to most of the species currently inhabiting the Earth, “seen one, seen them all” is not far from the truth for each one of them. Not so with human beings.

While it may be commonplace to claim, for instance, that a newborn looks like his father or her mother, or maybe granddad or grandma, in truth, as a species, we are a remarkably diverse species at least in appearance, if not in our intrinsic ways. The latter thought is key to our species, by the way. As Shylock says in one of Shakespeare’s plays,

If you prick us, do we not bleed? if you tickle us, do we not laugh? if you poison us, do we not die? and if you wrong us, shall we not revenge? If we are like you in the rest, we will resemble you in that. (The Merchant of Venice, Act 3, Scene 1).

It is precisely because of our individual as well as global diversity as a species that each of us is fairly readily identifiable as “you in particular” rather than just “us in general” say in a police lineup or on “Dancing with the Stars.”

It seems unfair to blame anyone if, on first impressions, they are astonished on seeing for the first time, say, how different people on the streets of New York, Chicago, or London may seem depending, evidently on where they or their immediate family came from around the world. In short, it seems entirely forgivable for all of us, on first encountering humankind’s diversity, to put people who look different into different boxes. I do not need to preach, however, that such first impressions can easily lead to racism and the sorts of prejudice that Shylock gives voice to in Shakespeare’s play.

Thinking outside the box

I am often discouraged not only as an anthropologist, but also as a human being, that it can be so easy for all of us to fall back on impressions and built-up prejudices as the road signs we pay attention to when we are on our journeys from the cradle to the grave. Thinking outside the box is evidently not something we all want to give a lot of time to doing.

Ironically, however, it is a lot easier to think outside the box than most of us may believe, although admittedly it does perhaps take practice and a certain amount of will power.

With this aim in sight, I want to suggest a few simple steps that can further such thoughtful awareness and originality.

1. Despite what you may already think, look again . . . We are all much better at seeing things for what they are if we only try than we may believe we are. When your clothing catches fire, the popular rule to follow is “Stop, drop, and roll.” Here’s another rule when it comes to thinking outside the box: “Don’t just think again, look again.”

3. Seek the connections that count . . . It is easy to find something to object to, something to get angry about when things don’t seem to be going the way you want them to, something to grab hold of so you can avoid thinking what it must be like in another person’s shoes. But first ask yourself this question. Why am I reacting this way?

Next up — Our New Dog Is Teaching Us About Life:  Lesson 1