My Late Father and His Love for Photography 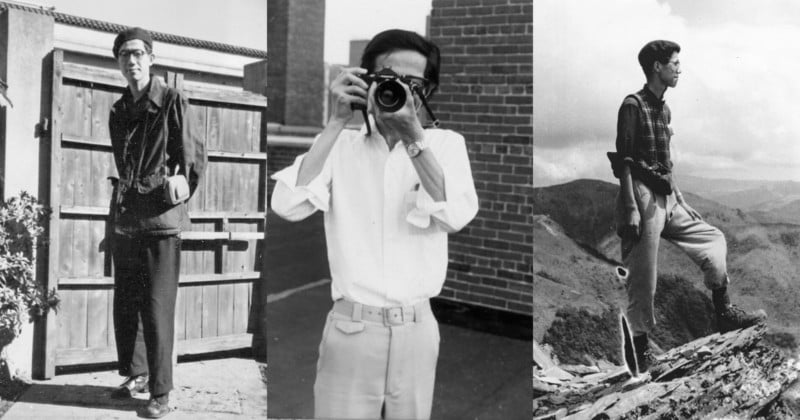 My father Ohno Tsuneya (Oct 9, 1937 – Dec 23, 2017) was born into a peaceful small town in the hilly countryside of Saitama prefecture, a few hours by train from Tokyo.

His hometown, Chichibu, nestled among small mountains provided an ideal playground for a young mind to explore fields of wildflowers filled with insects, forests reverberating with cicadas all summer, and brooks and streams with nymphs, tadpoles, crayfish, and minnows. In town, he gathered with other schoolchildren on Sundays and spent his pocket change on candy so he could listen to the local kamishibai busker tell stories with his hand-painted pictures depicting fantastical illustrations of ghouls and heroes.

Like any boy during that time, he played baseball – that American import that’s also quintessentially Japanese. Like me, my father was slight in build, tall and lanky. Not athletic but loved to hike, ski, and explore. When the fever of war swept across the country, my father, like all the young boys his age, were indoctrinated at school to defend the motherland, and with their spindly arms taught to hold and wield bamboo poles as spears to poke at straw effigies of enemy soldiers.

As the youngest of four siblings, my father had freedom to play. His father, a local politician, was a man of airs and appetites, a connoisseur who raised renowned hunting dogs that he had imported from Scotland. All the filial duties and expectations to succeed fell on my uncle, my father’s elder brother who my father no doubt worshiped.
​
World War II and the devastation of the country left Japan with a per capita income less than that of India at the time. Late in the war, Tokyo in a single firebombing raid saw over 100,000 civilians killed, over a million homeless. Food was scarce. My mother’s mother sold off kimonos to buy rice and sewed the rice into blankets to smuggle from the countryside to Tokyo for family. My father’s mother had to smuggle rice from more rural areas back to Chichibu. After the war, Japan threw itself into the long arduous task of rebuilding the country and society. My grandfather Ohno Tetsu died in 1950, during the American occupation of Japan. He was 46 years old.

My uncle Ohno Mitsuya sailed to the US to study journalism at the University of San Francisco. He never returned. Suffering from Marfan’s syndrome, he died presumably of a burst aortic aneurysm. He was only 23 years old. My father was still a teenager – and was now the only man of the house.

He came out to Tokyo to study at 9 years old, and eventually went on to study medicine at Jikei Medical University – the school he would later return to as a researcher and professor. He met my mother, Taniguchi Makiko when he was a student, bicycling across town to see her.

My mother was born on the first day of summer in 1940 in Tokyo, though her family hailed proudly from Kagoshima, the southern holdout of the last of the samurai. Her father Taniguchi Eizo served in the capital as an attorney for the City of Tokyo. During the war, her family fled to the countryside near Hiroshima after their house in Tokyo was firebombed. Eizo continued to work in Tokyo. On August 6th, 1945 my mother was 5 years old, playing when she and her mother saw a flash in the sky in the distance – it was the first atomic explosion and the end of the war. Eizo did his legal duty and served as a defense attorney during the Tokyo War Crimes Tribunal.
​
​

Like my father’s father, Ohno Tetsu, my mother’s father Taniguchi Eizo died in 1950. He was 56 years old.
​
My father was 13 and my mother was 10 years old when they lost their fathers. My mother’s mother, Emi, died after struggling with severe depression for eight years. My parents came of age without having a father in their lives.

My father loved photography – the art, the activity, the ritual, the tools. One of the last times he and I shared an outing was a brisk February Sunday in 2004, a day before my 38th birthday. We spent the afternoon at the Tokyo Metropolitan Museum of Photography to see a retrospective of Tanuma Takeyoshi. The exhibit spanned 60 years of Tanuma’s career, beginning with images of post-War children in Tokyo from 1949 that he took as a young apprenticing photojournalist.
​
In 1956, the Family of Man exhibition came to Tokyo. Tanuma was inspired by this exhibition and went to see it again and again. So did my father. The exhibition is still regarded as a grand undertaking, 503 photographs from 68 countries – its magnitude matched only by its own hubris and that of its curator, the photographer Edward Steichen.

However naïve it may seem today, the driving aspirations and ethos of the exhibit, to capture and encompass humanity in its multitudes as a single connected family, was situated firmly in the liberal ideology of its time, reflected in the contemporaneously articulated charter of the United Nations:

We the peoples of the United Nations determined to save succeeding generations from the scourge of war…to reaffirm faith in fundamental human rights, in the dignity and worth of the human person, in the equal rights of men and women and of nations large and small, and… to promote social progress and better standards of life in larger freedom.

The post-war Japanese intellectual of the late-Twentieth Century was an amalgam of times and cultures. Adorned with a black beret or a bucket hat, tucked into a turtleneck, the aficionado of culture and the cool connoisseur of consumer goods practiced as an amateur naturalist, a hobbyist polymath, and a citizen of the world. Simultaneously Modern and Romantic, the intellectual eccentric saw himself as hero, like a Sherlock Holmes – a Victorian avatar that still stubbornly abides in Japan.
​
It is not surprising then that my father left us in the United States and returned to Japan. He had brought us, my mother and my brothers, Shinya and Michiyuki to the US when I was 6 years old. My parents remained a married couple – we were still a family – just separated by 13 time zones and 6,740 miles. He left when I was 14. I had worshiped him until then.

Throughout my high school days, I felt his absence and filled it with rage. I was angry at myself for feeling angry toward my father – I felt like I was desecrating some sacred filial code. I drove my mother crazy, at times to tears. She deserved none of it. It took me into adulthood until I stopped following in his footsteps and abandoned science, until I worked feverishly making art, and then making social justice change that I felt relieved of my anger, forgiving my father and accepting and understanding him. He never saw it as abandonment, just a temporary necessity dictated by his work ethic. My mother eventually joined him after Michi graduated from Rutgers. Michi was perhaps the most American of us for having grown up in the US since he was 3 years old, but he too went to settle back in Tokyo. I inherited my father’s 1956 Leica M3 (#831611). It’s not that he bequeathed it to me. I claimed it a couple of days after he passed away. I like to believe he would have set it aside for me – but perhaps he meant to sell it. I didn’t know this M3 existed until I was rummaging through his cabinet of classic cameras, divvying up the collection between my brothers and myself. It was not a camera I had ever seen him use. He used a Nikormat while we all lived in the US. He gave that camera to my brother Shinya. My father used a black Leica M6 after that. But I knew what the M3 meant to him. We had years ago discussed its lineage and its reputation as the pinnacle of craft and industrialization, the greatest camera of the 20th century.

Industrialization and the availability of the easy point and shoot 35mm camera became a turning point for the modern world. Susan Sontag in her seminal essay, “Photography,” first published in the New York Review of Books in 1973 presaged my father’s relationship to his camera.

“The very activity of taking pictures is soothing,” she wrote, “and assuages general feelings of disorientation that are likely to be exacerbated by travel.” For my family, it was not travel but immigration in 1972 – jarring and alienating. Language proficiency, or rather its lack, always kept my father a little apart from interactions, a little behind in conversations. I could always see his desire to drop the bon mot, the jokes and puns he had in his head, if only he had mastery over English the way he had over Japanese. Instead, he had his camera. Sontag continued, “Most tourists feel compelled to put the camera between themselves and whatever is remarkable that they encounter.” It is a fine instrument for capturing and collecting moments but also a tool for defense.
​

Her essay is still incisive, perhaps more so with the advent of the cellphone. “People robbed of their past seem to make the most fervent picture-takers, at home and abroad. Everyone who lives in an industrialized society is obliged gradually to give up the past, but in certain countries, such as the United States and Japan, the break with the past has been particularly traumatic.” Migration only exacerbates this break.

For the last two years of his life, my father was bed-ridden in the hospital. He was intubated and then given a tracheotomy, taking his voice. By the end, he lost his desire to communicate, left his thick glasses by the bed, and no longer cared if he could see.

I inherited from my father, not only his camera, but also his adulation for what he glimpsed in that Family of Man exhibit – a vision of humanity suffused with dignity and love for all people, an exaltation of the everyday, the celebration of the common person, and the democratization of art.

​Now I strive to take photographs that express my love for the world. And every time I pick up the M3, every time I press the shutter, it is a continuing conversation with my father. The viewfinder of this old camera is his eyes, as I ask him, “Do you see? Do you see?”

All photographs are memento mori. To take a photograph is to participate in another person’s mortality, vulnerability, mutability. Precisely by slicing out this moment and freezing it, all photographs testify to time’s relentless melt. –Susan Sontag. 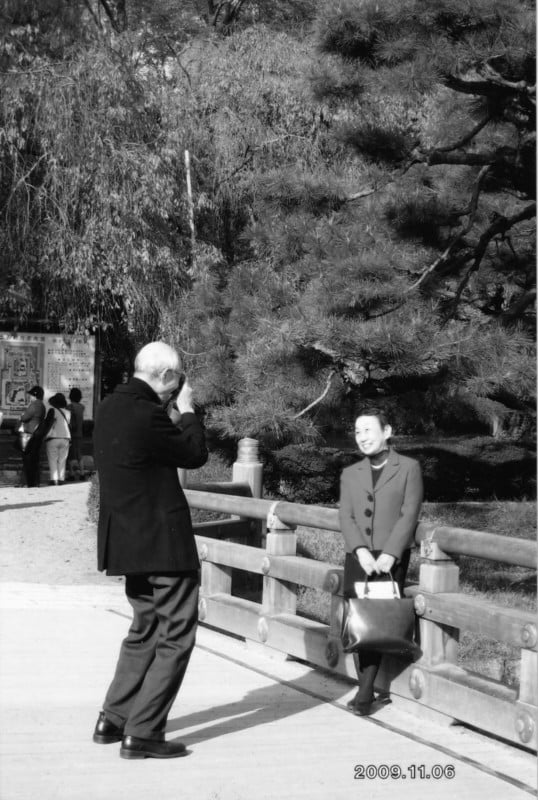 About the author: Shuya Ohno works in racial and social justice and is based in Washington, DC. The opinions expressed in this article are solely those of the author. You can check out Ohno’s photography on Flickr.