Never Needed to Be a “Macho Man,” but Don’t Call Me “Sissy”

Yesterday, I reported on a new study, “‘Be a Man’: The Role of Social Pressure in Eliciting Men’s Aggressive Cognition,” by a pair of researchers (Stanaland & Gaither, 2021) at Duke University. The main takeaway from this research is that younger men (ages 18 to 29) who feel societal pressure to “be a man” are most likely to respond with aggression if their manhood is threatened.

For example, when men between the ages of 18 and 56 were told “you’re less manly than average” after answering questions that tested their knowledge about stereotypically male topics like auto mechanics, the older men (over age 38) were much less likely to respond with “aggressive cognition” than younger study participants.

In this follow-up post, I’m going to filter Adam Stanaland and Sarah Gaither‘s latest research through the lens of my adolescent coming out experience and explore how the Village People shattered my preconceived notions of gender stereotypes as an impressionable eighth-grader in the late 1970s. Notably, although the Village People helped me shrug off societal pressure to “be a man,” I had a massive chip on my shoulder about being perceived as a “sissy” when I was younger. 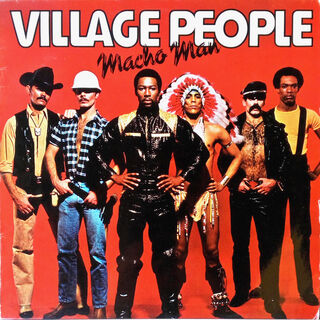 In 1978, the Village People’s “Macho Man” showed me that hypermasculine machismo is often a façade. As someone who let the world know I was gay by openly admitting to classmates and family that I was a huge Village People fan in the eighth grade, one of the strangest things about the 2020 Presidential election was how two über-gay disco anthems (“Macho Man” and “Y.M.C.A.”) by the Village People became President Trump‘s favorite songs to get the crowd pumped up at MAGA rallies. (See “‘Macho Man’ Is Queer, Even When Donald Trump Plays It at Rallies” by Matthew Hays.)

It wasn’t “Hail to the Chief,” but rather “Y.M.C.A.” that was pulsating from loudspeakers in the final moments before POTUS and FLOTUS departed Washington, D.C. on Inauguration Day. The New York Times described this January 20, 2021 scene on their Twitter feed:

“‘Have a good life,’ President Trump said to a small crowd of his supporters at Joint Base Andrews before boarding Air Force One for the final time, as ‘Y.M.C.A.’ by the Village People played over the speakers.”

The juxtaposition of Trump’s tough-guy persona and his openness to the seemingly obvious gayness of these Village People songs is an intriguing phenomenon, but something about it doesn’t compute.

In my opinion, “Macho Man,” which was a Top 40 hit in September 1978, is a satirical take on the cliché trappings of male machismo; this Village People song opened my eyes to the possibility that I could let societal pressure to “butch up” and “be a man about it” roll of my back without taking it too seriously. In unexpected ways, “Macho Man” helped me stop beating myself for being gay and helped me feel comfortable in my skin.

As a member of the LGBTQ community who came out around 1979, the Village People were pop-culture role models for me as a gay teen. Their campy, devil-may-care attitude helped me realize that “manning up” is often just an act; anyone can dress up in lumberjack drag and play that game.

The Village People’s fun-loving approach to wearing uniforms that represented hypermasculinity (e.g., construction worker, cowboy, Harley-Davidson biker, marine, police officer) while singing about their sexual attraction to other men was norm-breaking and empowering. These characters helped me realize that even when real-world “manly men” wear these uniforms in their day-to-day lives, it’s still a form of drag. I thought to myself, “If anyone can pretend to ‘be a man,’ why bother acting phony just to seem more manly?”

That said, although I could care less if someone thinks I’m “manly enough,” societal misconceptions that I must be a “sissy” just because I’m gay rubbed me the wrong way when I was younger and triggered aggressive cognition in the form of needing to prove to anyone who might say “you’re less resilient than the average person” that I had boatloads of mental toughness. Beyond gender stereotypes or homosexuality, I don’t think I’m alone in putting a premium on the importance of appearing gutsy, fearless, and invincible in my youth.

My so-called “sissy-boy complex” pushed me to spend my 20s and 30s proving to the world that I was “tougher than the rest.” As an ultra-endurance marathon runner and Ironman triathlete, I pushed myself to the brink of self-destruction. In my late 30s, I finally broke a Guinness World Record by running six back-to-back marathons in 24 hours; but my kidneys shut down near the end of this ultramarathon, and I spent a week in the ICU being nursed back to health by a team of specialists. This was a wake-up call that helped me realize it’s OK to be vulnerable, weak, and ask others for help.

To wrap up, although threats to my manhood never triggered aggressive cognition based strictly on gender stereotypes, until my late 30s, I wasn’t immune to the societal pressure to “man up” in terms of the desire to be seen as someone with grit. Of course, being resilient and strong goes beyond gender, but it took me until age 38 to realize that admitting I was vulnerable or weak didn’t make me a “sissy.”

Anecdotally, the age-related shift of no longer caring about how others perceived my mental toughness corroborates certain aspects of the latest research on what happens when a man’s manhood is threatened by Stanaland and Gaither. I’m 55 now and could care less if people think I’m a sissy, but this wasn’t possible when I was younger. I needed to push myself to the brink to prove that I had “sisu” and wasn’t a wimp. (See “Role Models Who Break the Mold Fortify Identity Construction.”)

Based on my life experience and evidence-based research, I suspect most of us (not all) are likely to mellow with age in terms of letting our guard down and admitting we’re vulnerable.