Ashley Diamond, a Black transgender woman represented by the Center for Constitutional Rights and the Southern Poverty Law Center, sued the Georgia Department of Corrections (GDC) for the second time for its failure to protect her from sexual assault and provide her with adequate healthcare while incarcerated.

In February 2015, Ms. Diamond filed a lawsuit challenging the abusive conditions facing incarcerated transgender people in Georgia prisons, which led to a historic settlement agreement and rebuke of GDC from the federal court and the U.S. Department of Justice. But despite the policy changes her lawsuit created, Ms. Diamond was met with similar unconstitutional conditions when she re-entered GDC custody in 2019.

As a result of a technical parole violation, Ms. Diamond, who was released on parole in August, 2015 re-entered GDC custody in October 2019 and has once again been housed in men’s prisons where she has been sexually assaulted more than 14 times in the past year by other incarcerated people and GDC staff. According to the complaint, she also has been subjected to relentless sexual harassment and denied necessary treatment for her gender dysphoria. Her experience has been so traumatic that Ms. Diamond recently attempted suicide.

“Being a woman in a men’s prison is a nightmare,” said Ms. Diamond. “I’ve been stripped of my identity. I never feel safe. Never. I experience sexual harassment on a daily basis, and the fear of sexual assault is always a looming thought. I’m bringing this lawsuit to bring about change on behalf of a community that deserves the inherent dignity to simply exist.”

Learn more about Ashley Diamond and this case on our website. Ms. Diamond was also the subject of a piece in The New York Times, which can be read here. 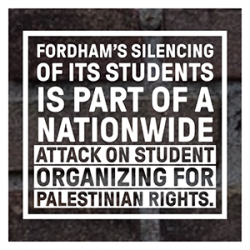 On Wednesday, attorneys representing Fordham University students argued before the Appellate Division of the New York State Supreme Court, urging the court to reject Fordham’s request that the court reinstate the school’s ban on a Students for Justice in Palestine (SJP) club. A lower court ruling held that Fordham had unlawfully overruled the Fordham student government’s approval of the creation of an SJP, “in large part because the subject of SJP’s criticism is the State of Israel, rather than some other nation.” Advocates say the struggle to form an SJP at Fordham is part of a broad and growing pattern of suppression of activism for Palestinian rights across the country.

“It’s disgusting that Fordham is still fighting against SJP after four years of this lawsuit,” said Veer Shetty, a senior at Fordham and member of Fordham SJP. “While we organize and educate about an important human rights issue, the school continues to spend our tuition money on a team of lawyers to silence us. Palestinians deserve justice!”

More than five years have passed since students initially sought to start a Students for Justice in Palestine club on campus in the fall of 2015. For a year, administrators dragged out the application process, requiring the students to attend multiple meetings, questioning students about their political views, and expressing concern that the club would “stir up controversy.” Finally, in November 2016, Fordham’s undergraduate student government approved SJP as a student club — only to have the Dean of Students take the unprecedented step of vetoing the student government’s approval, based on SJP’s “political goals” and the possibility that the club would lead to “polarization.”

Reflections on the Roots of the Center for Constitutional Rights By Dr. Ron Daniels, Former Executive Director