News: Supreme Court hears case of American Musims placed on No-Fly List for refusing to spy on their communities

Last week, we argued before the U.S. Supreme Court on behalf of American Muslims who were placed or kept on the No-Fly List in retaliation for refusing to spy on their communities in our case Tanzin v. Tanvir. We urged the Court to uphold a ruling that the men may sue the FBI agents for interfering with their freedom to practice their religion. The men initially sued to be removed from the list. After years of being prevented from flying, and just days before the first major hearing in the case, the men each received a letter informing them they were no longer on the list. A judge then dismissed the remaining portion of their lawsuit, which sought damages for the emotional and financial harm the men had suffered, but a federal appeals court reinstated the case. The Trump administration appealed to the Supreme Court.

“For years, I was frightened and intimidated by FBI agents who repeatedly tried to force me to go against my beliefs, even though I had done nothing wrong,” said Muhammed Tanvir, a plaintiff in the case. “I was being treated like I had no soul in my body. I am seeking justice in the hope that they don’t do this to others.”

The FBI’s abusive behavior in this case is just one example of the profiling, targeting, and harassment of Muslims by law enforcement and other government officials, which also includes extensive surveillance and infiltration of their religious communities and spaces, including mosques; holds on immigration status and other benefits; and the Muslim Ban.

Tanvir v. Tanzin was brought by the CLEAR Project, the Center for Constitutional Rights, and co-counsel at the law firm of Debevoise & Plimpton LLP.

On Thursday, 13 medically vulnerable people held in immigration detention in Louisiana filed an urgent request for release due to their high risk of life-threatening COVID-19 infection. Numerous courts around the country have recognized the heightened risk of COVID-19 posed by large detained populations and ordered the release of many of those at heightened risk of severe illness. The filing seeks release from the Pine Prairie ICE Processing Center (PPIPC) in Pine Prairie, Louisiana and the LaSalle Ice Processing Center (LIPC) in Jena, Louisiana.

“ICE’s continued refusal to take the most basic precautions to protect the human beings it detains demonstrates that release is the only safe option,” said Senior Staff Attorney Ghita Schwarz. “Immigrants in detention have sickened and died during this pandemic at a shocking rate. There is just no legal or moral justification for endangering our clients, others with whom they are detained, detention center staff, or the communities where the detention centers are located.” 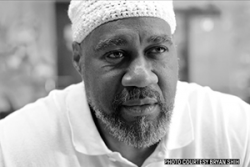 Former Black Panther and respected and beloved elder Jalil Muntaqim (Anthony Bottom) was released October 7, after serving nearly 50 years in prison. During his decades in prison, Jalil led education and mentorship programs for other people in prison, as well as earning numerous educational degrees and mentoring many younger incarcerated men.

Jalil is now home with his family and community and asks for everyone to respect his privacy at this time as he reconnects with his loved ones in freedom and continues to heal from COVID-19, which he contracted in prison last May. Jalil is deeply humbled and grateful for the broad expressions of support he has received from his family and community throughout the years and looks forward to this next chapter. 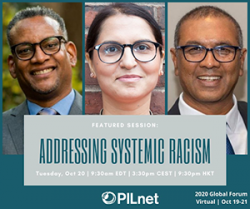 It’s no secret that institutional policies and practices historically created and currently maintain racial discrimination. The movements for Black Lives, against Apartheid, and for Roma rights are powerful calls to reject #SystemicRacism in our societies.

Hear our Executive Director Vince Warren, Margareta Matache of Harvard University FXB Center for Health and Human Rights The Roma Program, and Nersan Govender of Legal Resources Centre share and compare experiences and strategies used by lawyers and activists around the world and offer a vision for making the most of the momentum for change that we are witnessing today.

Next week! Join us for the Creatively Speaking film screening of “Voting Matters”

Join our Associate Executive Director Donita Judge as she participates in the Q&A for the Voting Matters film screening with the Creatively Speaking virtual film series.

More than 50 years after the Voting Rights Act of 1965, one of the most extensive pieces of civil rights legislation, people of color across the United States are still engaged in a battle to protect their right to vote. The documentary Voting Matters follows civil-rights attorney Donita Judge as she helps several voters in Ohio cast ballots even though they were initially turned away, while highlighting how many hoops must be jumped through simply to vote and how cries of voter fraud are exaggerated.

The film screening will take place on the Metrograph’s online platform, accessible by subscribing as a member of the theater for a $5 fee for one month.

Membership information can be found on Metrograph’s membership page.

Not Pictured | Center for Constitutional Rights

A look at the shady aspects of Tether, the stablecoin being probed by SDNY for over a year, widely used to buy BTC and other cryptocurrencies on many exchanges (Medium)

A Culture Obsessed with Blame