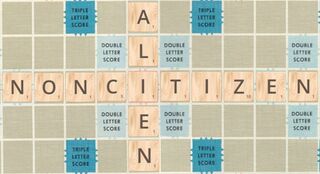 Those readers who lived during the 1980s may remember these lyrics from the chorus of the Sting song “Englishman in New York”:

In the language of US immigration, any person who is not a citizen or a national is an “alien,” whether they are a resident or nonresident, immigrant or non-immigrant, and documented or undocumented.

The use of alien in immigration law has long been controversial in the United States. The word has been in the government’s official lexicon since 1798, when it was used in the Alien and Sedition Acts. These were laws that made it harder for an immigrant to become a citizen, and allowed the government to imprison and deport non-citizens who were considered to be dangerous or hostile.

Hundreds of years later, “alien” is now interpreted as demeaning and dehumanizing by many people, and so the new President of the United States is pushing to change this terminology. In an immigration overhaul bill that Joe Biden has sent to Congress, he writes that the new administration “further recognizes America as a nation of immigrants by changing the word ‘alien’ to ‘noncitizen’ in our immigration laws.”

In reference to migration, alien fell out of use in other countries long ago, including the UK and Australia, while in Canada the term “foreign national” is used instead. Replacing “alien” with “noncitizen” is a more accurate word to describe a person’s immigration status, and also one that is not offensive.

Why is “alien” considered to be offensive?

Given its connotations in popular culture, “alien” conjures up images of UFOs and extraterrestrials; little green men with enormous dark eyes and antennae on their heads. Interestingly, the science fiction meaning of alien as “not of this Earth” or “from another planet “ is quite new, and only dates back to the mid-1900s. This is probably the most salient sense of “alien” today.

Flying saucers aside, alien can be alienating when used in reference to people. It is a term that implies “foreigner” and “stranger.” The word comes from Latin alienus, meaning “foreign, strange” and “of or belonging to another, not one’s own.” It suggests “outsider” and someone who doesn’t fit in or belong in society. The word encourages tribalism, and an “us versus them” mentality.

Alien used as a label stigmatizes immigrants. It is an othering term that portrays a person as not only different, but also dangerous, and possibly an enemy. During World War II, the US government launched propaganda campaigns to galvanize public support against the common enemy, while posters of the time warned employers against hiring “aliens”, stirring feelings of hate and fear against immigrants.

Alien also has negative connotations because it is strongly associated with unauthorized immigration due to the commonly used phrase “illegal alien.” Undocumented workers in the US are often branded “illegals,” another term that is dehumanizing and divisive. When we think about a person as an “illegal” we stop seeing them as a human being seeking a better life, and instead view them as “criminal” and deserving of mistreatment.

Recent communications from Customs and Border Protection have instead referred to apprehended migrants as “individuals”, such as a new release that announced a stash house bust in Laredo, Texas.

Since the inauguration of the new President there has been a noticeable reduction of the use of “alien” in news releases and documents emerging from the Department of Homeland Security. This change suggests that this use of “alien” may finally be retired, leaving us with the aliens of science fiction and pop culture.

This change also signals that the new US administration represents a more tolerant and progressive worldview.

For a further discussion of related topics, see my new book On The Offensive: Prejudice in Language Past and Present.