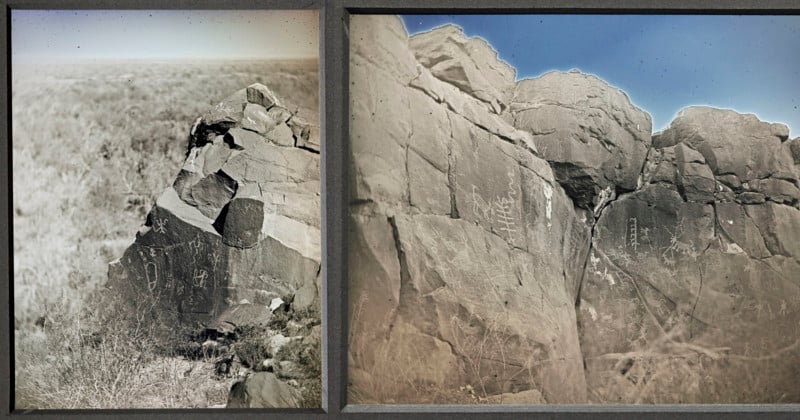 Toward the end of November, I went back to one of my favorite places in the desert. A spot out in the middle of nowhere, with the nearest significant human population well over an hour drive away.

A tall cliff overlooks the arid desert plateau there, running for a few hundred yards north to south. Winds blow tumbleweeds between desert shrubs and over cacti, and aside from lizards and flies, it’s rare to see much life. This wasn’t always the case though.

Thousands of years ago, beneath that cliff there was a river valley full of life and game, a beautifully lush prehistoric habitat. Dating as far back as 10,000BCE, various waves of Native American peoples thrived in this area. They left behind petroglyphs upon the face of this cliff, and on some of the more prominent rocks below.

Researchers place the oldest of these markings as being approximately 12,000 years old, with newer ones being 5,000 and 1,500 years old. Various rock alignments and paths have also been identified on the plateau, just above the main painted side of the cliff.

Having gone to this location before with wet plate gear, I wanted to pay homage to it in daguerreotype form. Making those in the field, though, is a task riddled with possible pitfalls, so this was to be a good test of my field readiness. I decided to camp there for two nights, because there’s nothing quite like being in the desert on those clear winter nights. I would set up on the first day, work all the second day, and have some time to shoot a plate or two in the morning of the third day before heading back.

Of course, camping in the desert means that within an hour or two after arrival every item you brought with you is covered with an even layer of dust. I knew that having some dust spots was going to be inevitable, and so made peace with them even while driving in, half an hour down a dirt road with some pretty hairy washes to traverse.

I set up in such a way as to have the most shade possible for my dark box and working table but had to move the car and reconfigure once a day because as soon as even some sun would reach the box, it would heat up to past 100°F. Midday in the shade it was still 90° though, so fuming times and ratios had to be adjusted with every plate.

I also decided to switch my modus operandi, and this time limited my arsenal to only 19th-century lenses. With me, I brought a 75mm Morrison WA, 100mm Dallmeyer 1aa, RR, 210mm C.C. Harrison Petzval, and 12in Waterbury single achromat.

Selecting perspective for my images meant climbing with a 4×5 and tripod on a 45° slope riddled with boulders as big as a room, with plenty of cactus in between each rock and of course the always-possible rattlesnakes. Overall it was great fun, seeing how I consider moments of high concentration and intense work to be great fun if that work is in fact creative.

I fixed and gilded the plates after getting back home. Thankfully I was reminded that this can indeed be done by a good fellow daguerreotypist because gilding on location is a sure sign of begging for major trouble. I selected the following 5 that spoke strongest to me. Two plates are of the same composition; these were made with the Harrison, utilizing different aperture discs in order to have less or more depth of focus.

Some ambient info about the trip is as follows.

While driving there, I was traveling at night east on an empty desert highway, and, while going full speed, saw an animal just about to dart out in front of my wheels. Our reaction time seemed to have been about the same, because by the time my hands were making a move to the left it too froze in it its tracks, halfway over the white line on the pavement.

I didn’t move left much, so my headlights hit the figure full blast, and I was elated to realize it was a grey desert fox, which is one animal I have not yet seen in the wild, even by side of the road like this. For a second there, I got a great look at a beautifully furry creature, and off behind the car it went.

On the first night on location, I had a very small fire going, upon which I made my humble dinner. Shortly after finishing the meal, I was in the state of contemplative meditation, reflecting upon successes and failures of the day, and just staring at the ambers of the fire, as has been my favorite pastime since childhood.

As one sits alone and looks at the fire, there’s a bit of a tunnel vision effect that happens, and the world outside the viewer and the fire pit softly muffles itself and gently drifts off. There’s not a light or movement around you, and smoke materializes, rises up, and dissipates like civilizations in time.

I must have been sitting pretty darn still because all of a sudden two very bright triangles appeared within the rightmost reach of peripheral vision. In my dazed dreamy state, I blinked as I moved my head much slower than perhaps the actual situation on the ground of having something unexpectedly come very near me, should have dictated. To the right of me, well within the reach of my right hand, stood an elegant and well-groomed desert fox, with its medium grey salt and pepper fir, and large triangular ears with bright white fir inside those triangles.

The beautiful creature must have been attracted to the smell of my recent dinner and was peeking into the fire pit when I first saw it clearly. At that moment the fox realized I was not an inanimate object, and got seemingly confused or embarrassed, because it looked at me, back at the fire pit, at me again, moved away about a foot, made a move back for a split second, and then slowly trotted away and around the fire like everything was cool and planned.

By then, my hand was already going to my phone, and at that moment I was quick enough to get the fire-lit photo below. I noticed that the fox didn’t exactly run off, but was hanging around and examining the camp perimeter area just outside view, so I tossed a few bits of bacon and salami into the dark and saw them being carefully picked up.

As I tried to shoot another picture of two, complete darkness prevented my phone camera from focusing, but as it glanced over I did end up with that funny second ‘guess who’ photo. The next night I was thinking my visitor would return, but coyotes were singing loudly nearby, so I think the fox was wise to stay put. 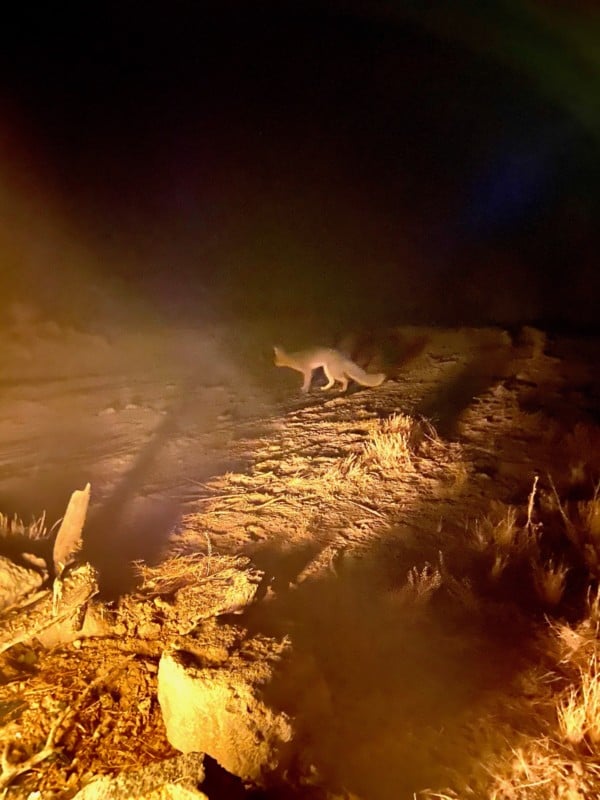 Along with enjoying the cheerful crackling of the fire, the night desert is also perfect for stargazing. The Milky Way is clear and colorful, and a myriad world can be seen twinkling down at you. As I started that part of my meditation, I soon saw a really bright shooting star, thinking it was a great omen. Then another one, then two more almost at the same time.

Well, turns out the nights I picked for my trip were the best nights to observe the yearly Leonids meteor shower, so I was staying up as late as I could, and saw over a dozen excellent meteors each night, with one fireball, that’s when they break as they heat up, and make multiple fiery trails.

Upon arriving back to civilization, I saw that the main day of my making plates out there, November 18th, happens to be the birthday of Louis Daguerre, inventor of the noble photographic method I was employing.

P.S. I am also very grateful to be able to say that 4 of the 5 plates above have been purchased by one collector, and are currently awaiting shipment to their new home. I am keeping one of the two near-duplicate plates as a reminder of this short but fruitful trip. Without such sales I would not be able to continue to survive and keep making more work, so, thank you to all who support independent artists like yours truly.

About the author: Anton Orlov is an analog photographer and the man behind The Photo Palace, a 35-foot school bus that has been converted into a darkroom and presentation area for educational and artistic purposes. He previously created a transparent camera and the world’s smallest tintypes. Visit his website for more of his work and writing. This article was also published here.

Playful Illusions Made from Household Objects

5 Posing Tips for Portraits of People with ‘Challenging’ Facial Features