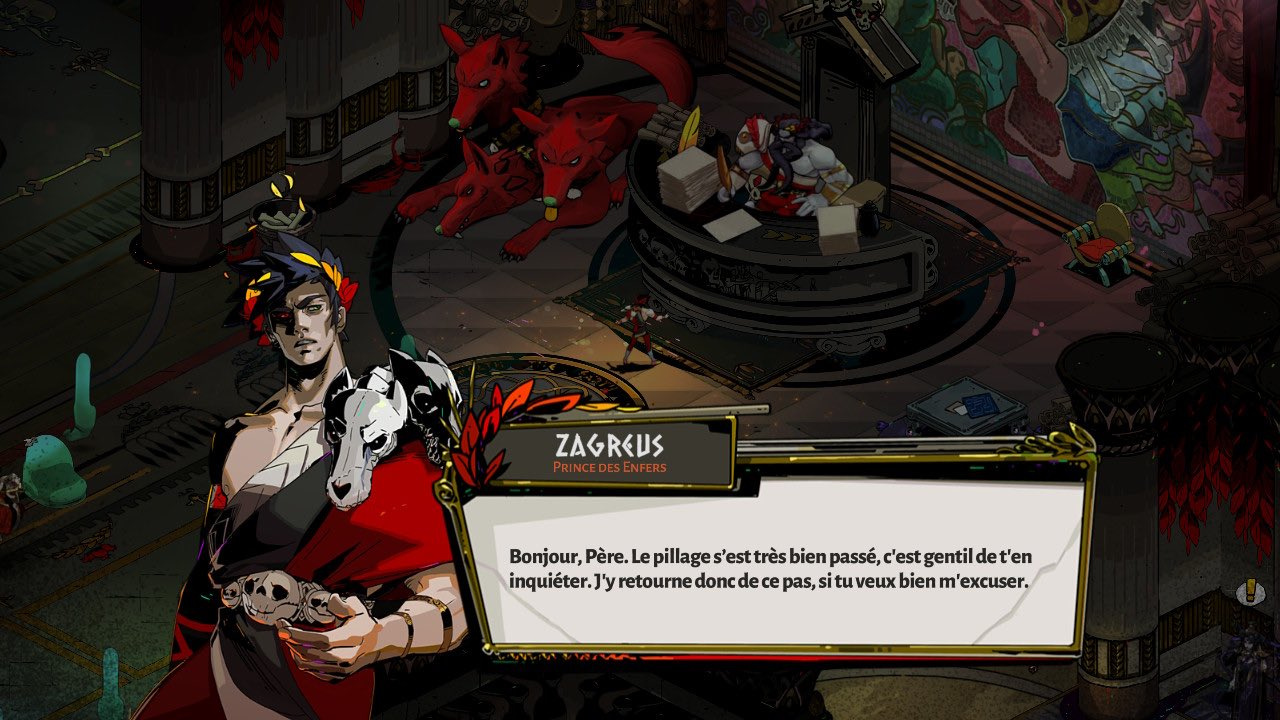 Translating games is hard work. For one, there are usually a lot of cultural references that are tricky to get right in a different language – remember Ace Attorney’s clumsy localisations back in the day? But even more important than culture is puns, and puns usually just don’t translate at all. The mark of a great translator is the ability to pun in two languages.

In a long Twitter thread, game developer Amandine Coget discussed the French translation of Hades, noting mistakes made during localisation and excellent/terrible use of the French language when it comes to jokes.

“Dash” becomes “Élan” which, yes, but that’s also the word for “moose”, which results in some funny sentences— Amandine Coget (@LiaSae) January 12, 2021

Localising into French allows for some fantastic wordplay, like the use of “grenade de puissance”, which can mean both “Power Grenade” and the equivalent of the English, “Pom(egranate) of Power”.

Skelly, Zagreus’ target dummy, is translated as “Thados”, or “tas d’os”, meaning “bonepile”. The skull-based enemies have a lot of pun names, like “Crânalgame”, which is a pile of skulls, combining the words for “skull” and “amalgam/jumble”.

However, French is notoriously bad for ungendered pronouns, meaning that all enemies are gendered as male, and Chaos – who is referred to in the English version with they/them pronouns, because Chaos is an unknowable entity – is talked about by others with awkwardly-phrased sentences that attempt to avoid using pronouns whatsoever.

Finally, they write around pronouns by using:
– “entité” (followed by feminine forms to go with it);
– “son” as a possessive pronoun, which isn’t gendered based on owner;
– “divinité” (also followed by a feminine form). pic.twitter.com/qfWLsXkzPH— Amandine Coget (@LiaSae) January 12, 2021

One main criticism that Coget seems to have more than others is the use of the polite, formal “vous” versus casual “tu” when addressing others, especially when mixed in with casual phrases like “genre”, the equivalent of the English “like”. You know, like, like this?

It turns out that Zagreus addresses all the Olympians using the formal “vous”, and they all (apart from Athena, occasionally) address him with the more informal “tu”, implying a certain relationship between them where Zagreus is seen as beneath their station. However, when talking to himself – which Zag does often – he still employs the more formal phrasing, and when talking to Hades, he can’t seem to decide if he should be polite, or use a ton of slang.

Interestingly, Dusa uses “vous” when addressing the Prince, showing how she respects (and maybe fears) him, but Zag calls her the same, making their relationship extremely formal… at least to begin with.

Hypnos – the sleepy name-taker of Hades’ halls – becomes much creepier in the French version, with translations that turn his original phrase of “maybe if you weren’t so tasty, they’d leave you alone” phrase (when killed by a Numbskull) into “craquant”, a word that means both “crunchy” and “cute”. It’s a play on words, but one that comes across much sleazier than the original.

And in case you’re wondering: yes, they translated Charon. French grumbles are different to English ones, it would seem.

For those of you interested in languages and localisation, you can check out the full tweet thread here, with a huge thank you to Amandine Coget’s insightful thoughts and translations. Have you played any games with really good localisations? Chat to us about your favourite translated puns in the comments below!