S&P 500, Nasdaq weighed down by tech stocks; Powell in focus By Reuters 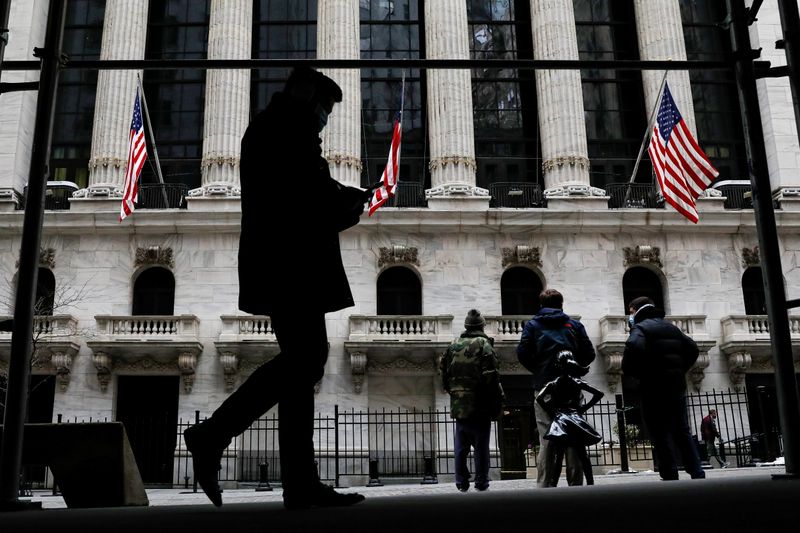 © Reuters. The Fearless Girl statue is seen outside the NYSE is seen in New York

By Shashank Nayar and Medha Singh

(Reuters) – The and the Nasdaq slipped in choppy trading on Thursday as jittery investors looked to remarks from Federal Reserve Chair Jerome Powell on rising bond yields, while data pointed to a staggering recovery in the labor market.

The crucial monthly payrolls report is expected on Friday.

Wall Street’s main indexes fell in the past two sessions as a spike in U.S. bond yields pressured high-flying tech stocks while economy-linked stocks outperformed on hopes of a new round of fiscal aid and vaccinations.

The energy sector enjoyed a 1% jump on the back of higher oil prices. Apple Inc (NASDAQ:), Tesla (NASDAQ:) Inc and PayPal Holdings Inc (NASDAQ:) were among the top drags on the S&P 500.

Powell is set to speak at a Wall Street Journal conference at 12:05 p.m. ET (1705 GMT) where his comments will be scrutinized for any hints of concern about last week’s jump in bond yields, in what will be his last outing before the Fed’s March 16-17 policy meeting.

Tech stocks are particularly sensitive to rising yields because their value rests heavily on future earnings, which are discounted more deeply when bond returns go up.

The U.S. Senate is expected to begin debating President Joe Biden’s $1.9 trillion coronavirus relief package on Thursday after agreeing to phase out payments to higher-income Americans in a compromise with moderate Democratic senators.

Boeing (NYSE:) Co rose about 1% as the United States and Britain had agreed a four-month suspension of U.S. retaliatory tariffs in a long-running row over aircraft subsidies to allow negotiations to take place.

Disney’s shares dropped 1% as it announced it will close at least 60 Disney retail stores in North America this year and about 20% of its worldwide total, as it revamps its digital shopping platforms to focus on e-commerce.