Samsung’s Jay Y. Lee on cusp of stepping out of father’s shadow By Reuters 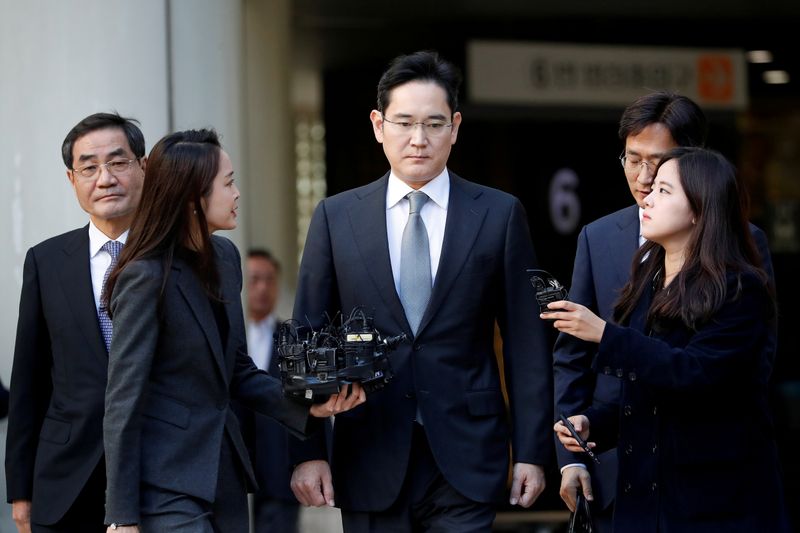 SEOUL (Reuters) – For years, legal troubles have cast a cloud over Samsung Electronics (OTC:) Vice Chairman Jay Y. Lee as he stood on the cusp of stepping out of his father’s shadow and making a name for himself as the leader of the global tech giant.

On Monday, he faces sentencing on a bribery charge that could sideline him from the world’s largest smartphone and memory chip maker just as it looks to overtake rivals in areas such as chip contract manufacturing and artificial intelligence (AI).

“Samsung (KS:) is at a crossroads,” said Park Ju-gun, head of researcher CEO Score. “COVID-19 has accelerated change, and other third-gen (Korean) business leaders are aggressively breaking into new business.”

Park cited Hyundai’s EV push and LG’s joint venture with Magna as examples of ambitious initiatives led by the grandsons of those conglomerates’ founders.

“But Samsung hasn’t really seen big changes in new business such as AI since its 2016 Harman acquisition, except increasing the foundry business, because of continued legal risk. The next few years will decide whether Samsung will become, say, a global platform company or remain a hardware company,” he said.

Lee, 52, has been the de facto head of Samsung Electronics since his father, Lee Kun-hee, was hospitalised after a heart attack in 2014.

The elder Lee died in October, but the chairmanship he held has yet to be filled, and uncertainty cast by his son’s legal troubles was the chief reason, analysts said.

Vice chairman since 2012, Lee has yet to make a mark – as his father did – by building the semiconductor business, which now brings in half of Samsung Electronics profits.

Amid the moves meant to ensure his succession, Lee has fought against allegations of legal wrongdoing, including a year in prison in 2017-2018 over a bribery case involving impeached President Park Geun-hye.

One of Lee’s focuses is Samsung’s non-memory chip business, including chip contract manufacturing, calling on the staff to “create another legend.”

Samsung plans to invest 133 trillion won ($121.47 billion) in non-memory chips through 2030 to become No. 1, including in chip contract manufacturing, where its 17% market share is a distant second to current No. 1 TSMC’s 54%, according to TrendForce.

Samsung has also touted Lee’s deal-making skills in winning a $6.6 billion contract from Verizon (NYSE:) last year, describing the network equipment business – still small compared with that of rivals like Huawei – as a key business area.

Lee also needs to deal with paying inheritance tax to maintain control of the tech giant. Since Lee Kun-hee passed away, an estimated 11 trillion won ($10.05 billion) in inheritance tax is expected to be needed for his family to inherit his listed stockholdings alone.

And he faces a separate trial over suspected accounting fraud and stock price manipulation connected to a 2015 merger that helped him assume greater control of Samsung Electronics.

Urbane, reserved and media shy, Lee has shown a relaxed side in public more recently after his release from detention.

He has been pictured eating lunch in staff cafeterias, taking selfies with employees, and smiling brightly when President Moon Jae-in visited a Samsung worksite in April 2019.

In May, he said he would not hand over management rights to his children and apologised for the behaviour of executives caught sabotaging labour union activities.

“A true super-class company is a sustainable company … I want to make a new Samsung,” Lee said during his final statement to the court in December.