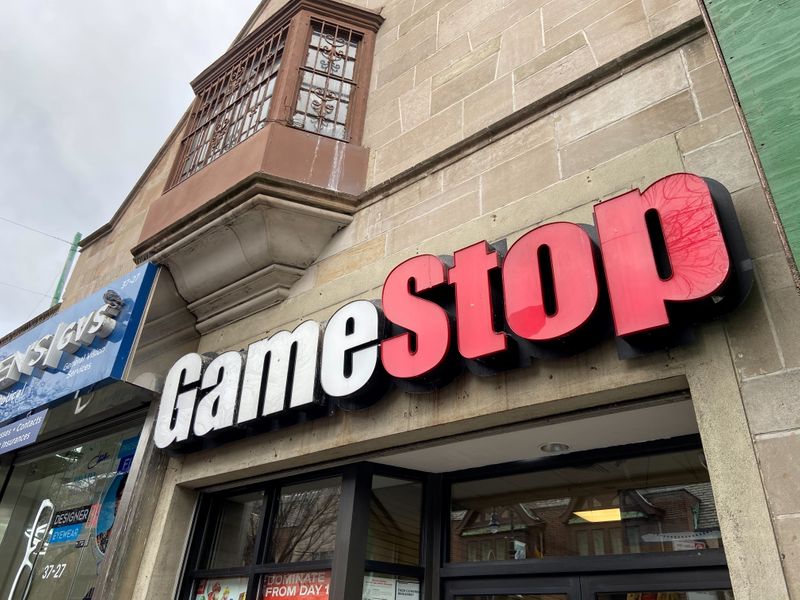 © Reuters. A GameStop store is seen in the Jackson Heights neighborhood of New York City

NEW YORK (Reuters) – Some investors are growing concerned that wild swings in GameStop and other stocks driven by small-time traders could be fresh signs of overexuberance that foreshadow volatility for the broader stock market.

GameStop shares closed up 400% for the week after the video game chain’s stock became a battleground between retail traders and Wall Street professionals, a tussle that captivated investors the world over.

Some market-watchers see those massive gains, as well as the moves in American Airlines (NASDAQ:) and other heavily shorted stocks, as a sideshow in a rally underpinned by Federal Reserve support, anticipated coronavirus relief spending and expectations that vaccines against COVID-19 will help the U.S. economy rebound later this year.

But those comments failed to quell some investors’ worries that the Fed’s monetary policy has encouraged excessive risk-taking across broader markets: The is up 66% since March and stocks stand near their highest valuations in two decades.

The action in GameStop and other stocks “definitely gives us some cause for concern,” said James Ragan, director of wealth management research at D.A. Davidson. “At the very least, you have to consider that there’s a chance of a market correction.”

“Just the fact that you have a group of investors that are really chasing abnormal gains, that’s what is reminiscent of the dot-com bubble,” Ragan said.

Some barometers of general over-exuberance are already flashing: Citi said its “Panic/Euphoria” model is in “elevated euphoric territory.” And the latest fund manager survey from BofA Global Research noted that allocations to cash had dropped rapidly, indicating that investors are putting more funds into riskier assets.

The frenzied trading dominated the news on Wall Street this week, even as Apple Inc (NASDAQ:), Microsoft Corp (NASDAQ:) and other corporate heavyweights reported quarterly results. The S&P 500 fell 3.3% for the week, with trading volume surging above 24 billion shares on Wednesday, well above the 14.4 billion-share average of the past 20 sessions. The CBOE volatility index closed above 30 points this week for the first time since early November.

One potential catalyst for further volatility could come if hedge funds are forced to sell out of positions in order to cover failed short selling bets, although it was unclear whether there would be enough of such selling to create a broad risk to equities.

Already, some short-selling hedge funds appeared to be changing their approach. Short seller Andrew Left, whose company Citron Research was one of the hedge funds to spark this week’s battle with small-time traders over GameStop Corp (NYSE:), said in a YouTube video on Friday that his company would no longer publish short selling research.

Others said the ramped-up activity of retail investors – who last year helped drive rallies in shares of Tesla (NASDAQ:) Inc and other names – could in itself be the latest sign of market frothiness.

“When you think about market bubbles, the last players that jump on board are retail, and that is generally what is happening right now,” said Mike Mullaney, director of global markets research at Boston Partners.

Analysts at LPL Financial (NASDAQ:) doubt the recent ructions in GameStop and other names indicate a broader market bubble, noting that market breadth – which measures how many stocks are participating in a rally – remains healthy and credit markets are functioning “just fine.”

“Maybe it is simply time for a break” in the S&P 500’s rally, the firm said in a report Friday.

Others, though, pointed to potential market turbulence ahead.

Other worrisome signs are the explosion of special purpose acquisition companies, or SPACs, and the surge in shares of electric vehicle companies on the heels of Tesla’s gains, said Scott Schermerhorn, chief investment officer at Granite Investment Advisors.

Still, he believes the frenzy over GameStop and other stocks is more of a “sideshow.”

Even after their rallies, the market capitalization of GameStop and other companies that have recently seen their stocks soar are “like a rounding error” compared with the broader market, he said.