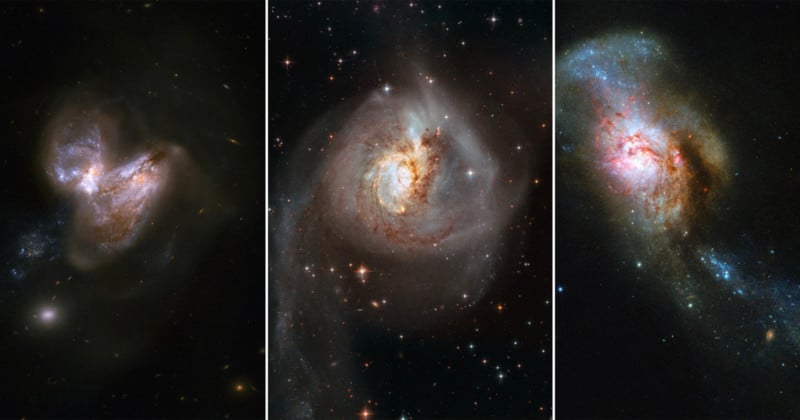 As part of its celebration of a new year, the NASA/ESA Hubble Space Telescope has published six different galaxy mergers. These rare astronomical phenomena were captured as part of a recent survey to investigate the rate of new star formations.

As part of the release, NASA/ESA explains that these rare merging events show galaxies undergoing dramatic changes in their appearances and stellar content.

These events give off a lot of light, and even after the collision, when the resulting galactic system fades into a more calm state, the massive star clusters will continue to shine brightly.

These images are a selection of six out of a group of 59 that have been published as early as 2008 and as recently as October of 2020.

“By studying the six galaxy mergers shown here, the Hubble imaging Probe of Extreme Environments and Clusters (HiPEEC) survey has investigated how star clusters are affected during collisions by the rapid changes that drastically increase the rate at which new stars are formed in these galaxies,” NASA/ESA writes.

“Hubble’s capabilities have made it possible to resolve large star-forming ‘knots’ into numerous compact young star clusters. Hubble’s ultraviolet and near-infrared observations of these systems have been used to derive star cluster ages, masses, and extinctions and to analyze the star formation rate within these six merging galaxies. The HiPEEC study reveals that the star cluster populations undergo large and rapid variations in their properties, with the most massive clusters formed towards the end of the merger phase.”

Fujifilm and Nintendo Made an Instant Photo Printer for Switch Gamers