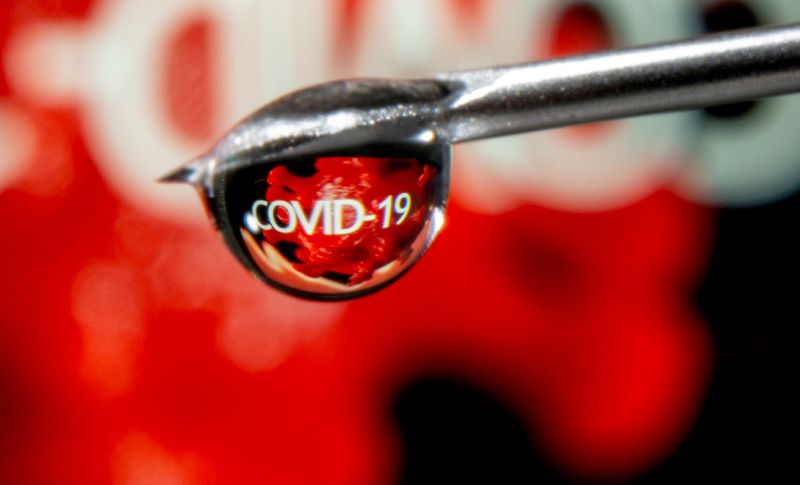 © Reuters. FILE PHOTO: FILE PHOTO: The word “COVID-19” is reflected in a drop on a syringe needle in this illustration

VILNIUS (Reuters) – Europe urged pharmaceutical companies on Tuesday to stand by their word in supplying coronavirus vaccines amid a series of delivery cuts and delays, as hopes for a quick fix to COVID-19 slowly crumble into recrimination.

The world has hailed the super-fast development of vaccines as the best chance of escaping the year-long pandemic, which has killed more than 2.1 million people, anxious to reboot economies and restart travel by the European summer.]

But vaccine rollouts in the EU have been have been slow compared with some other countries, and fraught with problems, not least interruptions to supply chains.

AstraZeneca (NASDAQ:), which developed its shot with Oxford University, told the EU that it could not meet agreed supply targets by the end of March. Pfizer (NYSE:) said there would be a temporary impact on shipments in late January to early February.

“And now, the companies must deliver. They must honour their obligations.”

EU member states could take AstraZeneca to court for breach of supply contracts if it did not honour its delivery schedule, Latvian Foreign Affairs Minister Edgars Rinkevics said.

“The possibility should be evaluated, and it should be coordinated among the EU countries,” the minister told Reuters, via his spokesman.

Each EU member state has a separate supply contract with the company.

“I can understand that there are production problems but then it must affect everyone in the same way,” Health Minister Jens Spahn told ZDF television.

AstraZeneca said initial deliveries to the EU will fall short of the targeted volumes because of a production glitch.

“Initial volumes will be lower than originally anticipated due to reduced yields at a manufacturing site within our European supply chain,” a company spokesman said in a written statement on Friday, declining to provide details.

‘THAT WOULD BE A WORRY’

AstraZeneca has offered to provide the European Union with supplies in February but has not given clarity on the possible rerouting of doses from Britain, EU officials told Reuters on Tuesday.

Any move to limit vaccine exports to Britain, newly departed from the European Union, would jeopardise the target of vaccinating the most vulnerable by mid-February, England’s National Health Service chief said on Tuesday.

“Were that to happen, then of course that would be a worry,” Simon Stevens, chief executive of NHS England, told lawmakers.

Sweden has paused vaccine payments to Pfizer and is seeking clarification over the amount of doses available in each vial, Swedish daily Dagens Nyheter reported on Tuesday.

Sweden is seeking clarity on the number of doses it has been billed for after Pfizer charged for six doses in each vial rather than the agreed five doses, the newspaper said.

Pfizer Sweden declined to comment to Reuters on the report but told Dagens Nyheter it had charged for six doses per vial.

South African President Cyril Ramaphosa on Tuesday urged wealthy countries not to hoard vaccines, saying the world needed to come together to fight the pandemic.

“The rich countries of the world went out and acquired large doses,” Ramaphosa told a virtual meeting of the World Economic Forum.

“… Some countries even acquired up to four times what their population needs … to the exclusion of other countries.”