Stones gives Man City the lead over United in derby

We have a goal in the Manchester derby at Old Trafford, and it’s from the unlikeliest of sources – John Stones!

Say what you like about the Carabao Cup and it’s significance, any semi-final between the city rivals is a big, big game – and it’s first blood City.

Pep Guardiola’s men love the Carabao Cup – they’ve absolutely dominated it of late. They’re now on course to reach yet another final in the competition, courtesy of John Stones’ thigh.

After an absolutely gorgeous delivery into the Manchester United penalty area from Phil Foden, Stones found himself to be the lucky recipient, beating Dean Henderson from close range. 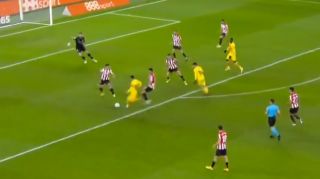 Naturally you ask the question as to how Stones was first to the delivery into the United box, but the quality of the delivery from Foden was quite sensational.

It remains to be seen if United have enough in the tank to get a goal back and avoid what would be a painful semi-final defeat to their noisy neighbours.