The statement, which can be read in full here, blasts English football’s leading governing body for banning the Manchester United striker after his use of the controversial term ‘Negrito’ on Instagram.

Cavani was labelled a ‘racist’ by some after he responded to a congratulatory message from a friend with the term, after singlehandedly inspiring United to a comeback victory against Southampton.

Whilst Uruguayan football across the world are sharing their PFA’s statement, which in fact states that the FA are the ones that have acted ‘discriminatory’ in the situation, Suarez’s decision is questionable…

Suarez was found guilty of racially abusing Manchester United legend Patrice Evra whilst playing for Liverpool in October of 2011, with the forward handed an eight-match ban for his behaviour.

The fact that he’s now defending his national team strike partner has of course caused a stir, he’s defending a perhaps unfair charge when he’s been found guilty of a more cynical one in the past. 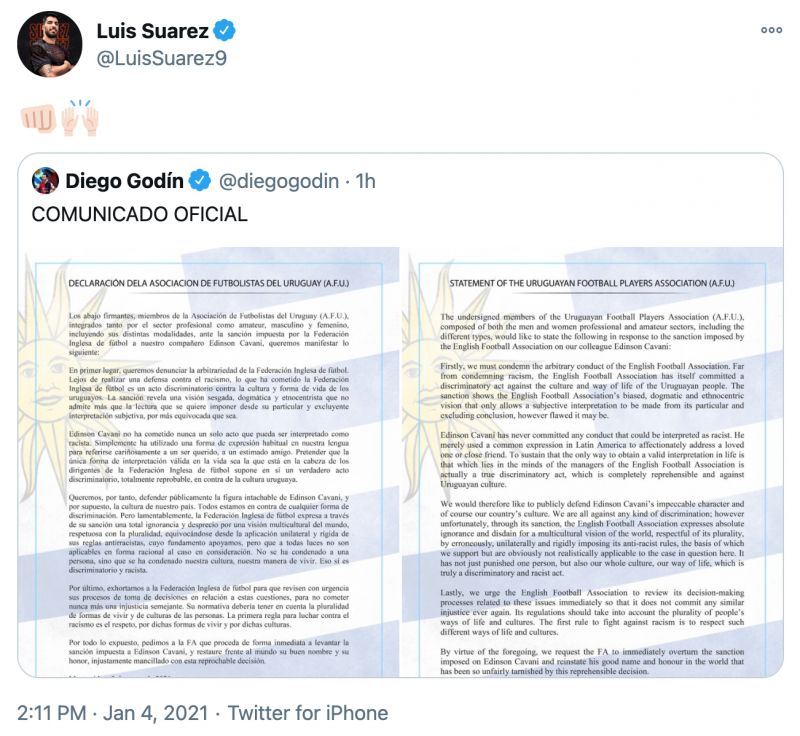 Here’s how some football fans have reacted to Suarez’s decision to weigh in:

Have some shame you can’t speak in a situation like this pic.twitter.com/9JHtqqZLUe

you should have stayed out of this one

This don’t apply to you man?

Sit this one out pal

Suarez’s questionable response to the matter is potentially a PR nightmare for Liverpool years after the fact as well now, whilst the Reds can never be excused for how they initially reacted to the incident, they’ve admitted they were wrong in recent years and now face question marks and shame once again.

Who played Angie Watts in EastEnders? What happened to her?

A Harvard medical student used OpenAI's GPT-2 to submit comments on Idaho's Medicaid draft proposal; volunteers couldn't tell them apart from those by humans (Will Knight/Wired)