Teddy Roosevelt’s Inauguration and His Advice to His Children 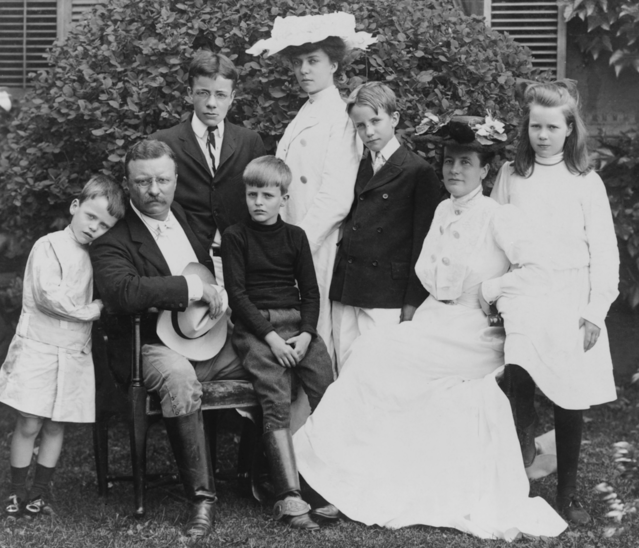 President and Mrs. Theodore Roosevelt surrounded by their family, circa 1903.

As one of America’s nine “accidental presidents,” Theodore Roosevelt was not voted into office his first term as president. He had served as Vice President to President William McKinley for only six months when he received word that a self-proclaimed anarchist had shot McKinley twice in the abdomen at the Pan-American Exposition of 1901 in Buffalo, New York.

Roosevelt was just about to give a speech that same day at Vermont Lieutenant Governor Nelson Fisk’s estate in Burlington, when a phone call came through with the terrible news. “Stunned amazement” was Roosevelt’s immediate reaction. He was only 42-years-old when he took the oath of office – still the youngest person to ever become President of the United States.

Unlike some of America’s other accidental presidents, however, Roosevelt knew he wanted to become president someday. “Of course, I should like to be President,” he once told his friend (and eventual successor) William Howard Taft, adding: “and feel I could do the work well.”

“Work well” he did. So well in fact that voters elected Roosevelt for a second term in office in 1904. He won a landslide victory against Democratic candidate Alton B. Parker.

Winning a second term gave Roosevelt the opportunity to experience the kind of inauguration he’d been deprived of when he was sworn in the same day McKinley had died three years earlier. His first inauguration took place quickly in a home in Buffalo, New York with only a handful of people present.

Because of the unexpected nature of that event, Roosevelt’s second wife, Edith, was not able to attend. Nor were any of Roosevelt’s six children: 17-year-old Alice (his only child from his first marriage, her mother having died of kidney failure only two days after giving birth to her), 14-year-old Ted, 11-year-old Kermit, 10-year-old Ethel, 7-year-old Archibald, and 3-year-old Quentin. His inaugural speech to the Cabinet officers present that day was only 41-words-long.

Roosevelt’s second inauguration, by contrast, was a grand affair. “The inaugural celebration was the largest and most diverse of any in memory,” according to the historic Theodore Roosevelt Association. A massive crowd formed in front of the East Portico of the United States Capitol to hear the president’s nearly six-minute speech as he yelled out over a strong, blustering wind and grasped his note cards tightly. “The whole scene,” writes biographer Edmund Morris in Theodore Rex, “was one of constant movement, as if Roosevelt’s energy had animated the entire body politic.”

Roosevelt’s time in office was certainly productive. He created the Food and Drug Administration (FDA), negotiated an end to the great Coal Strike of 1902, increased regulatory power over the railroad industry, oversaw the building of the Panama Canal, pushed a massive expansion of America’s National Parks, and managed foreign affairs so well that he won the 1906 Nobel Peace Prize.

Nevertheless, his presidential duties rarely caused him to neglect his responsibilities as a husband or a father.

“Roosevelt didn’t worry about the presidency taking him away from his children,” says John Cooper, a Roosevelt scholar and an emeritus professor of history at the University of Wisconsin. Cooper says that Roosevelt always made being near his children a priority and that his youngest sons, Archibald and Quentin, frequently played in the Oval Office with their father and their pets – once even taking their pony upstairs in the elevator. “With his hyper abundant energy, he spent time with them most days in the White House,” Cooper says, adding: “He didn’t see any conflicts between parenting and being president.”

Roosevelt’s oldest sons, Ted and Kermit, however, were away from their father during much of his time in office while attending a private boarding school in Groton, Massachusetts. Roosevelt made up for his time apart from them by writing to them often and hunting or traveling with them when he could. (As soon as he left office, for instance, Roosevelt took Kermit on a year-long expedition in Africa.)

His letters to his children were thorough, supportive, informative, and often full of advice and fatherly wisdom.

In a letter that he wrote to Ted shortly before he took the oath of office in 1901, he encouraged his oldest son to “go hard” and “do well” both in sports and in his studies at school, but affectionately reminded him that he needn’t be the best in his class in either category. “I do not expect you to stand first in either (athletics or schoolwork), if so to stand could cause you overwork and hurt your health,” he wrote.

He offered similar encouragement and love in a letter that he wrote to Kermit soon after his first inauguration. “I am delighted at all the accounts I receive of how you are doing at (school),” he said. He added that he did want him to improve his staying on task, however. “Do your best to cultivate the ability for concentrating your thoughts on whatever work you are given to do,” he admonished.

Shortly before his second inauguration in 1905 he waxed nostalgic in a letter that he wrote to then 13-year-old Ethel while she was away: “Do you recollect how we all of us used to play hide and go seek in the White House, and have obstacle races down the hall when you brought in your friends?”

About the same time, he wrote a letter to Kermit reproving him for letting his grades slip and for nurturing his homesickness instead of being present in his studies: “If…you only thought day after day of how soon you would get home, I think you would find it difficult to do your best work,” he wrote, adding that it’s better to first “put your hand to the plow (before) looking back.”

Throughout his presidency, Roosevelt wrote to his children about his hunting expeditions and goings-on at the White House, but he rarely philosophized about his duties as president or shared that burden with his kids.

The most frequent exception being found in his letters to his oldest child. Alice had always been a handful for her father (he once mused that “I can be President of the United States, or I can attend to Alice. I can’t do both.”), but the two eventually got along quite well. In a letter he wrote to her shortly after his second inaugural (she was then 21), he confided that the past few months had been “wearing” on him, and that he was shouldering more foreign policy responsibilities than he wanted to. Though he was praised for his accomplishment of negotiating peace talks between Japan and Russia, he told Alice that he was amused “to see the way in which people generally gauge (his) work purely by the fact that it succeeded.” No matter how much time he’d put into the peace talks, he knew that if he had failed in his efforts he “should have been laughed at and condemned.” Because he succeeded, however, he said he was “overly praised” instead.

“Roosevelt’s children were raised to be honest, polite, selfless, thoughtful, considerate, self-contained, hard-working members of the family,” says Stacy Cordery, a Roosevelt scholar and a professor of history at Iowa State University. Cordery explains that the children were always “aware of how their parents defined duty, and of the expectation that they do theirs in any given situation.” Cordery says the children understood that those “same qualities which governed their behavior in the family were just as important in the larger community.”

As the head of his family and the head of the nation, Roosevelt set the example of how to navigate both sets of responsibilities seamlessly.

Though at other points in his life he developed depression and showed signs of bipolar disorder, his White House years proved to every successor that it’s possible to be a father first, and a president second.