The 7-Step Approach to Effortless Self-Regulation

To reach important goals, we often exert a lot of effort.

But what if there was an easier way?

An article by Ludwig and colleagues, published in the November 2020 issue of Perspectives on Psychological Science, discusses such effortless self-regulation strategies.

This post summarizes the article’s suggestions about how to use effortless self-regulation strategies at seven points in the enactment of any behavior (see Figure 1). 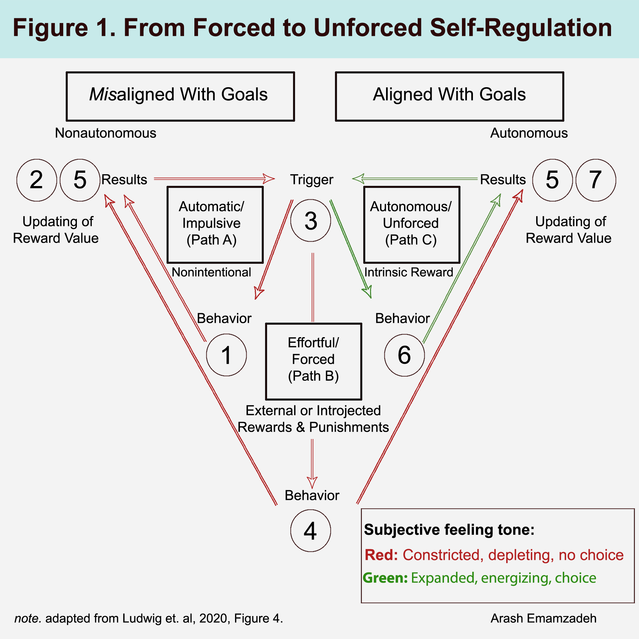 At Point 1, the individual notices that some behavior contradicts an important goal; for example, eating out conflicts with the need to save money.

Since behaviors often become automatic, such awareness is an important step in creating change.

Intervention: At random times throughout the day, pause. Then, ask yourself, “What am I doing and why?”

2. Outcome of the goal-incongruent behavior

Moving from Point 1 to Point 2, one will need to mindfully consider the results of that automatic and impulsive behavior.

After consciously evaluating the consequences of the behavior, the net result might be positive, neutral, or negative. For instance, the temporary pleasures of eating junk food are perhaps not worth the weight gain, stomachache, and feelings of guilt and regret. If so, the updated reward value of the behavior will now reflect this negative value.

Over time, being mindful of the behavior’s outcome is akin to collecting data showing the automatic behavior is not as rewarding as previously assumed. Awareness of this negative value will eventually give rise to unpleasant feelings of dissonance and discomfort.

Intervention: Perform your usual behavior (e.g., eating unhealthy food) mindfully, noting your feelings and the consequences of the behavior.

3. Triggers of the goal-incongruent behavior

Take the example of stress eating. When a trigger is encountered—a hurtful comment, an emotion like fear or anger, or sensory stimuli like the smell of fried food—one can use the updated reward value (Point 2) to consider alternative behaviors that might be more rewarding.

4. Forced restraints of the behavior

After realizing that some unhealthy behaviors are less rewarding than assumed, people often try to reduce them using effortful tactics.

In fact, triggers (Point 3) provoke not only automatic behaviors (e.g., stress eating) through Path A to Point 1, but also provoke forceful regulation attempts (e.g., using pure willpower) through Path B to Point 4.

Forcibly stopping oneself, however, will not reduce the desire. Sometimes it makes it stronger.

Intervention: As you forcefully engage in or refrain from engaging in some automatic action, observe your unpleasant subjective experience (e.g., of effort, frustration, struggle).

5. Outcomes of forced restraints of the behavior

Moving from Point 4, we see two consequences of the same forceful self-regulation, as represented by Point 5 on the left and on the right:

A. Left Point 5: Negative results (e.g., the resistance to forcing oneself to exercise).

B. Right Point 5: Positive results (e.g., the benefits of exercise itself).

Such awareness can update the value of the effortful emotion regulation strategy used to control unhealthy or dysfunctional behavior. So, one learns that forceful regulation (even if temporarily necessary) is not very rewarding or effective in the long term.

Intervention: Attend to your subjective experience of using forceful self-regulation. How successful is the forceful strategy?

Realizing that behaviors incongruent with one’s goal (Path A) and effortful strategies of controlling those behaviors (Path B) both have lower than expected reward value, one might begin to explore behaviors that are unforced (i.e. autonomous) and more intrinsically rewarding. See Path C, Point 6.

At this step, people can experience the freedom of choice to experiment (e.g., try three instead of four scoops of ice cream), try alternative behaviors (replace the last scoop with delicious fruits), or change the goal itself (eat right to feel healthier instead of to look better).

Intervention: Make a note of the type and frequency of effortless and autonomous goal-congruent behaviors you have been exploring recently.

7. The outcome of a new, effortless behavior 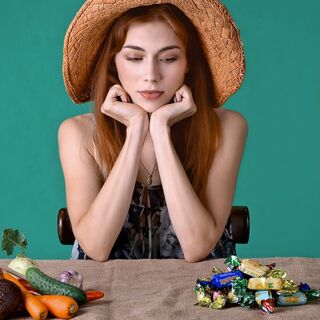 Point 7 (Path C) concerns the realization of the consequences of the new autonomous and unforced behavior and updating its reward value.

For example, you may notice a sense of pride, self-confidence, inner sense of calm, or additional energy after behaving autonomously (e.g., consciously choosing rather than forcing yourself to go for a run, save money, or eat healthy).

Autonomous behaviors are rewarding because they help us achieve valued goals, are associated with freedom and a sense of agency, and are energizing and effortless.

When self-regulation is autonomously motivated (Path C)—in contrast to forceful self-control (i.e. reacting only to reward/punishment)—no single behavior is considered “the right one.” This means many options become available to help us achieve our goal. And we can act with full awareness of what we find naturally satisfying and valuable.

Intervention: To strengthen your new behavioral pattern through repeated updating of its reward value, pay attention to how you feel during and after trying a new autonomous behavior.

Through mindful observation of your automatic behaviors and effortful (but ultimately unsuccessful) attempts at controlling these behaviors, you will find yourself slowly engaging in more autonomous behaviors and using effortless self-regulation strategies. Perhaps doing so is one key to success.