The Stake in Gambling With Covid-19 is Life 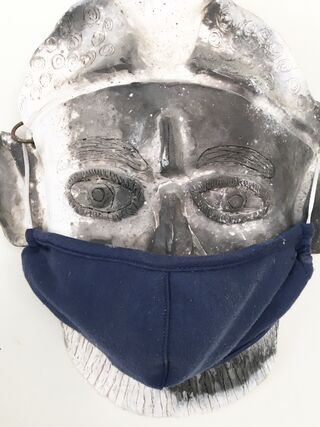 In my last post, “Why So Many Are Gambling with Contracting Covid-19,” on January 13, 2021, I acknowledged concerns over reported dangerous side effects of the new vaccines that had been approved by the FDA so quickly. It is time to go back to the question about the chances of contracting Covid-19 before getting the vaccine.

A most recent HealthDay/Harris Poll shows that 93% of US adults often or always wear a mask in public. That is good news, though one wonders about the logical reasoning faculties of the other 24 million. Wearing masks or not, it opens the question of why so many Americans feel the need to be in large gatherings.

Suppose we ask for the estimated chance (0-100%) that at least one person attending an event with ten people will test positive for Covid-19. According to statisticians at Georgia Tech, the answer would depend on the locality of that event. If the event were in Harding, New Mexico, the odds are less than 1%. In Powell, Montana, it would be 84%. For anywhere in the country as a whole, on average, it would be 75%. That seems more frightening than it might be because there are regions of this country where contamination is relatively small—relatively used here as a prophetic adjective. Yet, now in these Covid vulnerable times, many Americans seem to be craving life in large pods, not considering the odds of becoming long haulers of Covid or dying of the disease, even when those odds are available at https://covid19risk.biosci.gatech.edu/.

Conspiracy theories travel from someone believing them to someone gullible.

Within behavioral psychology, there is personality theory. The presumption is that an individual behaves per his or her personality type. In this camp, the question remains whether or not a dominant personality is genetically determined or dependent on life experiences. Personality theory attributes decisions to environmental influence, with consciously learned habitual responses to external stimuli that may appear at any stage of life.

What holds for personalities applies to communities. The view of a neighborhood is something that evolves by migration. For one hundred years, from 1860 to 1960, Vermont, the state I live in, voted Republican in every presidential election. Look at it now. For the last 24 years, it has never voted for a Republican president.

Fortunately, at any stage of life, it is possible to unlearn anything learned. Some behavioral psychologists believe that rewards reinforce repetitive behavior. For the decision to accept a Covid vaccine, the payment is the safety of immediate health. For the decision to turn down a Covid vaccine, an incentive is avoiding any complications that might arise from a hidden but dangerous side effect. Some considerations may come from social media conspiracy theories.

Our behaviors become reinforced by our immediate physical surroundings and their consequences, and that reinforcement gets regularly repeated. (I’m using the word reinforcement here the way Pavlov defined it: a reinforcement is any event that strengthens—reinforces—behavior.) We know when to eat and when to sleep, which road takes us to work, and which road home. Those habits stabilize our feelings for the everyday world around us and give us enough comfort to balance our emotions and coping skills. However, a significant amount of reinforcement is unpredictable; perhaps, a friend relays something you had already seen many times on Facebook and Twitter that falsely claims all Covid vaccines make people sterile.

The Centre for Countering Digital Hate (CCDH) reports that 31 million people follow anti-vaccine groups on Facebook, and 17 million people follow those same groups on YouTube. It warns: “The decision to continue hosting known misinformation content and actors left online anti-vaxxers ready to pounce on the opportunity presented by [a] coronavirus.”

That reader brought up a good point—a tricky one, though. It is true that with deaths rising at a rate of roughly 43,000 a year over the last ten years due to the increasing population, 73,539 deaths should more accurately be just 30,539. But I then say, hold on– It might be true that when some people died in 2020 from Covid-19, those same people did not die from heart disease, cancer, accidents, or flu in that year. In other words, some will die from causes not related to Covid-19. What seems strange now is that we should expect the largest age group dying to be that of people over 75. It turns out that more people between the ages of 40 and 60 are dying than should be, given the collective health of that age group.

So what should I say to readers who think the numbers are not so high? I say this.

1. Do you sincerely think that hospitals in Los Angeles are colluding in a hoax that patients are waiting seven hours in ambulances?

2. We are looking at the wrong numbers.

First, the number of deaths quoted for 2020 as 2,926,129 is correct; however, it translates to a rate of 8.9 per 1,000, not 9.4 per 1,000.  It does not account for the yearly addition of between 3 and 4 million Americans to the population. It is the Crude Mortality Rate (CMR), a number that gives little information about the risks of dying from Covid-19 by using the entire population rather than the number of confirmed infected cases.

No one should underestimate the risk.

It doesn’t matter who those people are because, by default, we must take into account a 3 to 1 ascertainment bias; that comes from the understanding that not every case gets tested, and so it is very likely that there are three times more cases than confirmed.

That still does not tell you anything about your odds of dying from Covid-19. For that, we need the Infection Fatality Rate (IFR). That also depends on locality. For example, Philadelphia and San Antonio have almost the same populations (1.6 million). The likelihood of contracting the virus from mingling with ten masked people following social distance guidelines in Philadelphia is 12 in 100. In San Antonio, that likelihood is 25 in 100.

So it turns out that even though the chance of contracting Covid in San Antonio is twice as big, the chance of dying there is half that of dying in Philadelphia.

Another approach is to look at the more relevant number, the Age-Adjusted Death Rate (AADR), which for 2020 is 887 when it should be close to 700. When we categorize the US population by age, groupings of five-year-intervals, we find that, for those groups below the age of 60, the number of people in each group is consistently close to 10 million. After age 60, those numbers begin to drop, and after 70, they drop off more and more significantly. That is why we must use the AADR when accounting for death rates for a virus such as Covid-19.

The table above is an excerpt of AADR collected data from the CDC going back to 1933, the first year those numbers were computed and listed. Those AADR numbers come from the data we have for 2020. In this year (2021), things are looking far worse. We are now just a bit more than halfway through January. In this month alone, more than 60,000 (as of 1/21/21) Americans have died. And by the end of the month, the number is likely to be more than 100,000.

With the end of the pandemic near (we hope), Sarah Zhang, in the Atlantic, calls the next six months to be vaccine purgatory. It will be a period of suspicion of efficacy and side effects, bringing delays in getting back to a life that we once thought of as normal.

We are competing with Russian disinformation exemplified in statements like this one posted on Facebook and Twitter accounts of Kirill Dmitriev, chief executive of the Russian firm financing Sputnik V, the Kremlin vaccine.

Western vaccine manufacturers rely on experimental, little studied, and not proven in the long-term technologies, encountering obstacles in their clinical trials.

Purgatory, it will be, if 140 million Americans fear complications of side effects attributed to any of the emerging vaccines. Many, beyond the 140 million, are concerned about the rushed testing. Successful disinformation will muddy the already sullied intelligence of risk in not getting vaccinated.

I am not a psychologist, so take what you like from what a say. I am, however, a mathematician who has written extensively about odds and gambling. I can foresee what might happen when the bombardment of Covid vaccine disinformation builds a science-doubting fringe alliance from a growing number of credulous people who know nothing about the mathematics of risk.

We need more than just a majority of Americans vaccinated to protect themselves, their neighbors, and loved ones.

If, when given a chance, 140 million Americans decide not to be vaccinated, we shall still get to herd immunity; the consequential herd will include only those who have immunity. We do not know how long those immunities will last. One does not have to know anything about the mathematics of risk to understand that those who remain among the 140 million not vaccinated will be outside the herd hoping to draw a flush to survive over a straight flush with death. It is not easy to calculate the mathematical odds, but seriously, no one needs to do the calculation to know what is risk-wise and proper to do.

It is enormously important to understand that an under-vaccinated nation risks continued waves of virus transmission, as mutations are likely to occur among those who are symptom-free spreaders. Mutated viruses—now in the US—will spread exponentially. Once that spread gets out of control, new mutations might change the spike proteins to become unrecognizable to the vaccines we now have. If the vaccine rollout is too slow or a third of the country is not vaccinated soon, we might find ourselves in a tidal wave of cases. The vaccines now coming our way could become ineffective in defeating the Covid-19 that had been well-tested against the spike proteins. That could bring us into the darkness of another year of searching for amended vaccines.

Where will we be then, if and when a tsunami of mutations hits this country?

Fortunately, mutations are random, without purpose. Luck is still on our side because all mutations happen too slowly to change the attack significantly. Most will have little or no effect on the contagion of the virus or the vaccine efficacy.

Huge Tuchel decision came as no ‘surprise’ to Chelsea defender