The U.S. Capitol Rioters’ Deeper Cause 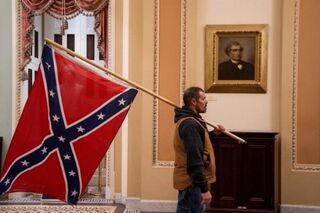 Yesterday Trump supporters rioted, attacking police, breaking into the Capitol, and planting improvised explosive devices (IEDs). There is evidence that they intended to take hostages, and to stage a coup, ending 232 years of the peaceful transfer of power in American Democracy. Many of these people believed they were stopping a stolen election, because Donald Trump and many Republican allies–including Josh Hawley, Ted Cruz, and others–were promoting this theory. All of the specific claims Trump and his allies have made were addressed and rejected. There is no credible evidence to indicate that the election results were incorrect. 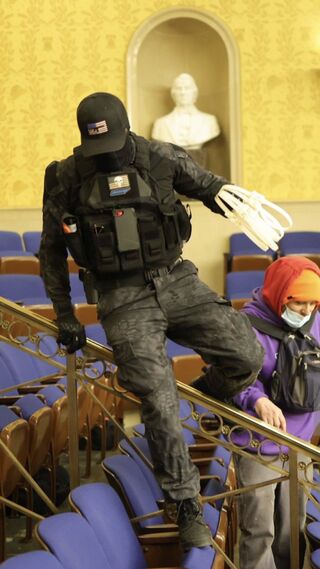 An anonymous individual brought zip ties to the Capitol to take hostages.

Although many Republicans did not participate in the riot yesterday, the claims that the 2020 U.S. Presidential Election was illegitimate are widespread in Trump’s party. For example, Jonathan Strickland, the Mayor of Sundown, Texas, told a reporter “there’s no way in hell” that Biden won. He would only believe the results of the 2020 election if Trump himself says Biden won. As he put it: “Trump is the only one we’ve been able to trust for the last four years.” Social scientists have a lot of work to do in unpacking the causes and implications of this event, but I want to focus some attention on why Strickland and others believe the claim that this election was stolen. At root is an issue central to this blog: how do we know?

This year, I reread Harper Lee’s classic novel To Kill a Mockingbird. The story revolves around the trial of black man, Tom Robinson, for raping a white woman in the small town of Maycomb, Alabama. As becomes evident over the course of the trial, Robinson did not commit the rape. There are numerous logical arguments in the story put forward by this woman and her father, who was insisting on prosecuting the case despite the fact that it was unprovable–and the facts actually indicated that he had beat his own daughter and was pinning it on Robinson. The case is expertly argued by a well-respected lawyer from the town, and the evidence is overwhelming that Robinson is innocent. Yet despite this, the jury convicts him of the rape. 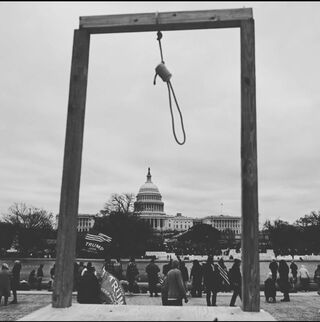 Rioters erected nooses outside the U.S. Capitol yesterday, harkening back to the Jim Crow South.

Source: Image tweeted by the NAACP.

The jury convicts Robinson of rape because at the heart of the case is whose word is believed: that of a white woman or that of a black man. In Lee’s Maycomb, it is important to the population that the word of the white woman be upheld as a more respected source of knowledge, even when this goes against the facts. What was at stake was not just this one particular case, but a larger principle: whose claims need to be respected.

There is the literal truth, which can be known by examining the details of the case, and there is the Official Story, the story that the town of Maycomb will present to itself and others when people ask what happened. The Official Story is created by consensus among the people of the town, who need to decide on a mutual understanding of what happened based on the facts presented to them. This type of Official Story is just one of many that people create to understand what happens to them and those around them. Why do some people have more than others? Why did this person decide to marry that person? Why did one person get elected and not another? Creating these stories requires an interpretation of facts, and when interpretations differ, people need to understand who to trust. They may choose to only nominate certain people, or certain kinds of people, to be worthy of giving interpretations worth trusting. For example, they may have an informal rule that explanations and interpretations by black people don’t need to be listened to or respected, especially when there is an alternative presented by a white person. 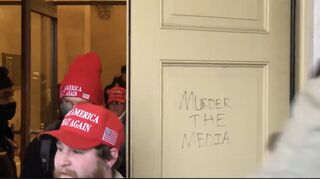 Rioters left this message in the Capitol, attacking the spread of information they disagree with. 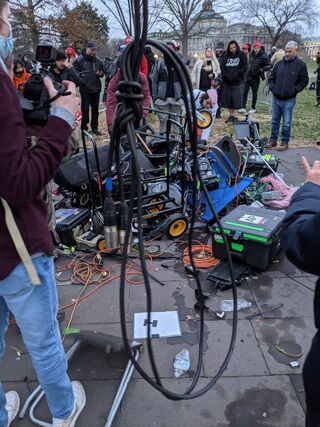 Rioters also created a noose from equipment they stole from news organizations.

In her book Entitled, Philosopher Kate Manne explains the concept of “epistemic entitlement.” This is entitlement to occupy the role of Knower. In other words, a feeling that someone is owed the right to be The Expert, The Smart Person, The Person Who Knows Best. More to the point, someone who is epistemically entitled is someone who assumes that they should be the one in the position to say what’s true and false, what’s real and fake. In Maycomb, white people were reserving that special role for themselves. They sentenced Tom Robinson because they did not want to give up that advantage in status.*

When we think of why Mayor Strickland believes that the 2020 presidential election was illegitimate, we might be tempted to point to fake news or the polarized media landscape. He is only listening to news programs that give him false and biased information, and that’s why he doesn’t believe the results of the election. If only he were to start watching less biased, less polarized news programs, he would have a more accurate understanding of what is going on. Yet that’s not what Strickland is telling us. He says only information coming from one specific source–Donald Trump–will count for him. He is rejecting the possibility that journalists or independent fact checkers could have the standing to challenge Trump’s word. 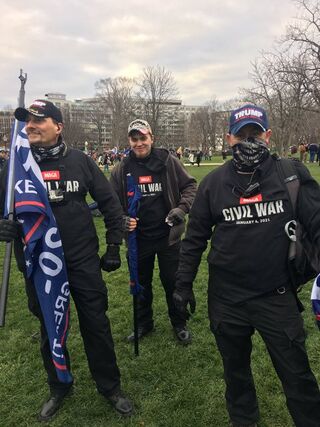 Rioters outside the Capitol had civil war hoodies printed.

What Strickland is doing–and what the rioters who attacked the U.S. government yesterday over false claims are doing–is the same thing that the people of Maycomb, Alabama were doing in the trial of Tom Robinson. They are reserving for themselves and their chosen leaders the special right to occupy the role of knower. They are fighting for the right to have the special privilege of being the Person (or people) Who Decide What is True. Understanding this dynamic–that people are fighting not to know what’s true, but to be able to control the Official Story about what is true–is necessary if we want to confront it. Fact checking is not the answer. To create a society where supporters of the President are not attacking the Capitol, we need to fight against the culture–and belief–that knowing is a special thing that only some people get to do.

* I want to note here that Manne is drawing on the work of Miranda Fricker, whose concept of testimonial injustice, maps perfectly onto the situation Tom Robinson faced. Testimonial injustice is when a person’s word is taken as less credible than it should be because of that person’s group membership.