Many Celtic supporters are furious at the Glasgow Times, who uploaded a tweet dubbing Neil Lennon “popcorn teeth.”

The story has been covered by various Celtic fan media outlets, including The Celtic Star, who have called on the club to ban the newspaper from Celtic Park.

The article has since been removed following a reaction from the Hoops’ hierarchy. However, in addition to a furious reaction from Celtic fan media, there were also a number of comments from supporters on social media, such as the below:

Absolute disgrace get them banned from Celtic park ! our lack of backbone in matters like this is absolutely shocking ! Call him a crap manager if you like but that was terrible

Meanwhile, a Celtic supporter named Jackie John, commented on The Celtic Star’s article about the incident by stating:

“Though weare champions like some commentators and pundits especially those ex players who when talking always mentioned Celtic second even going alphabetical wrong it’s the way the are brought up in the west of Scotland the times always do it in columns about the two teams I wont say old firm that ended in 2012 we have diff6 sponsors where Celtic have flourished and the times team as much as they paper tries to not print the negative stories like they write about Celtic u need to be in a time capsule not to know the gross management off club.” 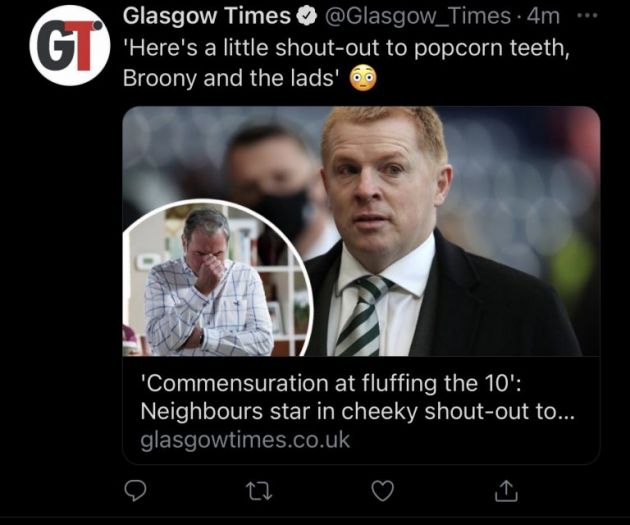 According to The Celtic Star, the newspaper that used to be called Evening Times, have received an email from Celtic at the weekend complaining about their disgraceful headline, which included personal insults directed towards the Celtic manager.

The website then turned it’s attention to the club by going on to say: “Maybe Celtic’s email should have simply informed them (Glasgow Times) that they are not welcome and not to come back and then the club’s Head of PR could actually have the courtesy to respond to emails he has received from the Celtic fans media asking for similar media access.”