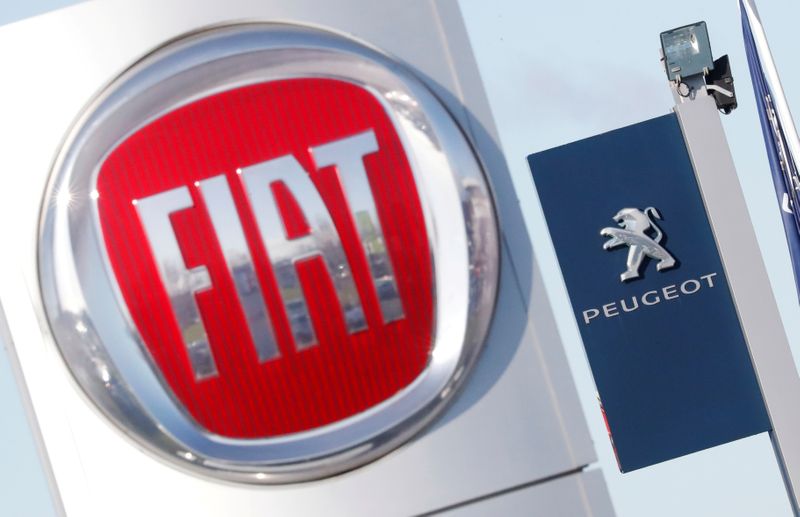 © Reuters. FILE PHOTO: The logos of car manufacturers Fiat and Peugeot are seen in front of dealerships of the companies in Saint-Nazaire

PARIS (Reuters) – The main shareholders in Peugeot (OTC:) owner PSA gave the green light on Monday to the group’s merger with Fiat Chrysler (FCA), one of the last steps towards creating the world’s fourth largest automaker.

At a special shareholder meeting, the deal to form Stellantis, the new company, was backed by more than 99% of the votes cast by investors with double voting rights.

These include PSA’s top stakeholder, the Peugeot family, as well as China’s Dongfeng, while a broader shareholder meeting was underway on Monday and FCA investors were also due to vote on the agreement.

“We are ready for this merger,” PSA Chief Executive Carlos Tavares told the online meeting, adding the final date for the closure of the deal would be announced shortly if all shareholder approvals were granted.

The shareholding structure will be altered as part of the merger, and existing double voting rights – which are accrued over time and give investors more weight in decisions – will not be carried over.

Tavares, who will take the helm of the merged group, will have to revive the carmaker’s fortunes in China, rationalise a sprawling global empire and address massive overcapacity, as well as focus like rivals on creating cleaner cars.

Stellantis will have 14 brands, from FCA’s Fiat, Maserati and U.S.-focused Jeep, Dodge and Ram to PSA’s Peugeot, Citroen, Opel and DS. PSA has traditionally been more focused on Europe.