Today, the world honors the dual meanings of Trans Day of Remembrance and Trans Day of Resilience by remembering and celebrating the lives of all trans, non-binary, and gender non-conforming people. Even in the midst of a global public health pandemic (one that is disproportionately affecting trans communities because of the U.S. government’s failure to protect them), rampant violence against trans people has not slowed down. 2020 has been a deadly year: at least 36 trans or gender non-conforming people have been murdered in the United States, and globally, at least 350 trans people have been killed. 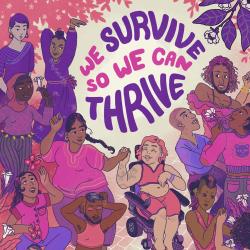 Image description: Brightly colored Illustration of a crowd of trans and non-binary people of color of different races, abilities, sizes and genders. They are dancing, resting, talking and being together and wearing bright pink and purple outfits. Text says “We Survive So We Can Thrive”

Trans Day of Remembrance provides space for us to collectively grieve and mourn. The Center for Constitutional Rights takes this moment to pause and honor the trans siblings we have lost at the hands of state-sanctioned gender-based violence, misogyny, and transphobia. Including, but not limited to: Nina Pop, Dominique “Rem’mie” Fells, Neulisa Luciano Ruiz, Tony McDade, and Brayla Stone. Because of the many ways in which race and class oppression heighten transphobic discrimination, it is particularly important for us to center poor, Black, trans women and femmes today as they are the most unprotected and vulnerable to lethal transphobic violence amongst us.

This day too is also a reminder of trans resistance and power. We celebrate Trans Day of Resilience as a call to action: we all must show up for and recognize the inherent worth and priceless contributions of trans folks.

The uprisings of this summer against anti-Black racism have highlighted the incredible and long-standing work of trans people in leading struggles for justice and equity, from the trans housing complex just opened in Queens by GLITS to the work of various Black trans-led organizations coordinating racial justice marches and rallies, fundraising for legal support for protesters, and supporting cultural work and food security within trans communities. Similarly, trans folks are slowly gaining recognition for decades-long work leading movements for immigrant justice, sex worker rights, and other issues—work that has fundamentally gotten us all closer to freedom. Still, there is much to be done in order for us to achieve a societal level of gender self-determination necessary for trans people to live abundant and joyous lives.

We represent Ashley Diamond, a Black trans woman and social justice activist who is currently incarcerated at Coastal State Prison, a men’s prison in Garden City, Georgia. Ashley is trying to survive brutal abuse and mistreatment by the Georgia Department of Corrections. The abuses and deprivations that Ashley has endured are part of a larger custom, practice, or unwritten policy of disregarding the rights of incarcerated trans people. “We can no longer sit as we become near extinct,” Ashley has said. “We are the voice of change. Being Black is hard. It’s even harder and definitely deadly being trans, but the best is coming.” Together, we are fighting for the health and safety of all trans people incarcerated in Georgia and beyond.

We acknowledge—and fight against—the multitude of structural biases, in addition to the prison system, that result criminalization of trans people for simply existing: discrimination in housing, the immigration/asylum process, employment, healthcare access, education, and so on.

Trans folks don’t just deserve to survive, they deserve to thrive. We must imagine and work towards a world in which trans people, especially Black trans women and femmes, are treated with dignity: a world in which gender-based violence ceases to exist, and everyone is able to express, explore, and celebrate their gender with full bodily autonomy without fear.

The Center for Constitutional Rights is committed to fostering a society in which trans people are able to charter their own lives and live in the fullness of who they are.

News: Shifting power to the people beyond Biden’s first 100 days

Reflections on the Roots of the Center for Constitutional Rights By Dr. Ron Daniels, Former Executive Director