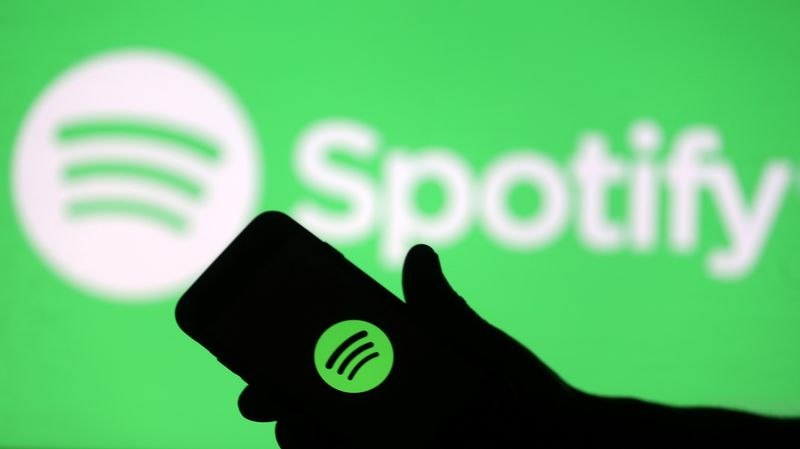 © Reuters. A smartphone is seen in front of a screen projection of Spotify logo, in this picture illustration

WASHINGTON (Reuters) – The U.S. Justice Department’s top antitrust official said on Friday the administration will not scrap decades-old agreements with music licensing groups ASCAP and BMI that hold down costs for Spotify (NYSE:) and others.

The department’s review of the matter had been closely watched since scrapping the 1941 consent agreements could upend the business of licensing music to online companies like Spotify and Pandora (OTC:) as well as movie companies, commercials, bars and restaurants.

Without the decrees, companies of any size seeking to play music would have to negotiate rights in a chaotic transition while also facing the prospect of price hikes, said the MIC Coalition, whose members include the Brewers Association and National Restaurant Association.

Makan Delrahim, the head of the Justice Department’s Antitrust Division who steps down next week, said in speech that the “investigation period” was closing.

“The ASCAP and BMI consent decrees should be reviewed every five years, to assess whether the decrees continue to achieve their objective to protect competition and whether modifications to the decrees are appropriate in light of changes in technology and the music industry,” Delrahim added in a speech to Vanderbilt Law School.

ASCAP and BMI said they were disappointed by the government’s decision to formally close its review with no action taken. “The formal close of this review means we can put this matter behind us for the near future,” added ASCAP Chief Executive Elizabeth Matthews and BMI CEO Mike O’Neill in a joint statement.

The Digital Media Association, which represents Amazon.com Inc (NASDAQ:), Pandora and Spotify among others, welcomed the department’s decision to maintain the status quo, at least for now.

“Music licensing is complex, but throughout their existence the decrees’ protections have fostered an efficient marketplace that in turn has been critical to the resurgence and growth of the music industry,” said the group’s president, Garrett Levin, in a statement.