What’s Behind the Magic of Seeing Yourself Represented? 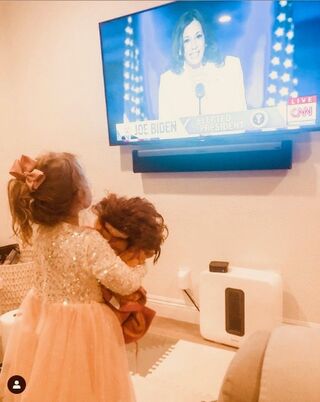 “I want there to be a girl president,” said my eight-year-old niece when Hillary Clinton was running.

“I want the girl cook to win Master Chef Junior,” said the six-year-old daughter of a friend in season one.

These girls were too young to assess political issues or judge the most sophisticated meal but their wish, their need, to see themselves reflected in public life was visceral and clear.

On January 20th,  these girls, now ages 12 and 14, and so many others, will witness Kamala Harris — a woman, a Black woman, and a person of Indian descent — take office. For four years they will watch her confer with the President of the United States, prepared to take over in a moment’s notice. And they will internalize the words in her acceptance speech more fully:  “…while I may be the first woman in this office, I won’t be the last. Because every little girl watching tonight sees that this is a country of possibilities.”

But why does it really matter that Vice President-elect Harris is female?

Growing up in the ’70s as I did, girls didn’t know to hope for something like that. It wasn’t something we imagined because it wasn’t something we saw. Sure, I read a few books about how girls could be anything boys could be but I didn’t often have the opportunity to wish for “the girl” to win, especially in politics, because there were few women in the race. Even now, despite gains, the US ranks 75th out of 193 countries in women’s representation in government.

I only started thinking about representation 25 years ago in graduate school when a Black friend mentioned that, as children, she and her neighbors would rush to call each other on the rare occasions they saw themselves represented on TV by another black- or brown-skinned person. I was stunned and ashamed that I’d never realized how few people of color could be found on television and in movies. As a White person who watched White actors all the time, the homogeneity didn’t register. But neither did the dearth of female representation. The norm is what we grow up with and if we don’t see ourselves, we must not be important. It’s what researchers call “symbolic annihilation.” Listening to my friend, I began to realize how rarely I had seen women in public life I could aspire to be.

The popular hashtag #RepresentationMatters is actually born out by the research which shows role models are indeed influential. They motivate us, give us someone to emulate, and teach us how to overcome obstacles. If that person looks like us or shares a similar background, we’re more likely to be able to identify with them and imagine ourselves in that position.

Role models can provide inspiration not to give up during setbacks. Think Michael Jordan who didn’t make his high school varsity team, Oprah Winfrey who was fired from her first anchor job and told she was “unfit for television,” and 12-year-old Beyoncé’s band that lost on the talent TV show Star Search.

With regard to female politicians in particular, one study found that “over time, the more that women politicians are made visible by national news coverage, the more likely adolescent girls are to indicate an intention to be politically active.” In addition, “where female candidates are visible due to viable campaigns for high-profile offices, girls report increased anticipated political involvement.” A series of survey experiments also found that inclusive representation increases perceptions of democratic legitimacy among US citizens.

Many women can serve as role models, but it’s usually the scantily clad ones that get the attention. Sex sells and girls are watching. The more girls and people of color see themselves represented less stereotypically in the media and public life, the more space they’ll have to imagine bigger futures. And the more others will see them as capable of public leadership.

When Hillary Clinton was running for president in 2016, it suddenly became very important that gender not be considered (as if being a man for the last several hundred years had played no role in who became president). Some of the widespread comments included: don’t let gender dictate your vote, I don’t vote with my vagina, a uterus doesn’t qualify you to be president.

But it’s not just about seeing your identity represented in your leader; it’s also having the issues that matter to you represented. A large body of global research has found that the higher the proportion of women lawmakers, the greater the number of laws enacted to advance gender equality. That stands for women in both major parties in the US. Women are more likely than men to pursue laws that advance childcare, equal pay, reproductive healthcare and domestic violence legislation.

It makes sense. Women see these matters as core issues whereas men (specifically White men) who have dominated politics place these concerns in the category of specialty issues. The issues that affect White men have historically been considered mainstream issues.

Diversifying our leadership broadens the range of topics that government considers. In a country that ranked a dismal 53rd for gender parity in 2020 this is no small matter. People should be able to expect a world where policies are made with them in mind and with people like them to represent their needs. We cannot dismiss this as lame “identity politics.”

On Inauguration Day as Kamala Harris officially becomes VP,  many groups will be given a role model; many identities will be affirmed. All parents, but most especially parents who are first generation immigrants or people of color, can turn more easily to their daughters, no – all of their kids, and say “study hard, be proud of your identity and you too can be who you want to be.” Or as Kamala put it:

…to the children of our country, regardless of your gender, our country has sent you a clear message: Dream with ambition, lead with conviction, and see yourself in a way that others might not see you, simply because they’ve never seen it before.

Australia stocks higher at close of trade; S&P/ASX 200 up 0.82% By Investing.com