Where Do We Go From Here?

This the third installment in this series, which is intended to take a look at the cult-like behavior of Donald Trump and his followers, identify the danger they pose to our representative democracy, and suggest what can be done. In a previous post I argued that Donald Trump and his followers should be considered a “cult” because they exhibit, near-textbook cult behaviors including unconditional devotion to Mr. Trump and the belief that his word is the ultimate truth and final say on subjects. Their behavior runs counter to the pillars of a functioning democracy, and therefore poses a threat to the United States of America.

The United States has witnessed an unprecedented event in the history of our nation. As Congress met to certify the election, making Mr. Biden’s win official, supporters of Mr. Trump broke through the Congressional Police and stormed into the Capital Building. Emboldened and legitimized by Mr. Trump’s calls to “stop the steal” by being strong, the mob entered the Capital building and delayed the proceedings, forcing some members of Congress to shelter in their offices like schoolchildren during an active shooter drill. 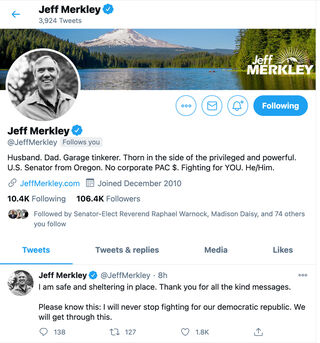 Tweet from Senator Jeff Merkley of Oregon during the events of January 6, 2021.

How can we, as a society move beyond this?

Cults are not new to the human experience. They have, almost certainly been around as long as humans have believed in supernatural forces and individuals have manipulated those beliefs to their own advantage. However, cults did not become a major focus of study until the late 19th and early 20th centuries when Max Weber first wrote about sects and cults in American religion (Loader & Alexander, 1985). Weber described cults based on charismatic leadership and the routinization of charisma (1922). Like so much of Weber’s scholarly pursuits, his groundbreaking work on cults laid the foundation for further research on the topic.

In 1932, American Sociologist Howard Becker classified cults within the framework of Sociological theory (Fahlbusch & Bromiley, 2013). In the ninety years since, researchers have revealed a great deal about the dysfunctional nature of cults and their potential impacts on societies. In 1978, Campbell suggested that cults are associated with beliefs in a divine element in the individual; it is either soul, self, or true self (ibid). While some researchers have claimed that participation in a cult can have a positive influence (Anthony, 1988) most studies show the opposite. In fact, there is now an abundance of data showing that cults are disruptive, potentially dangerous elements of societies, especially when they become legitimized or institutionalized (Marske, 1987; Hughes, 1993). We saw that on display on January 6, 2021 in Washington, D.C., but that wasn’t the first time cults have become violent in America, or around the world.

Cult violence has been common throughout recorded history. From Ancient Egypt (Quirke, 2002) to the Inquisition (Netanyahu, 1995) to Nazi Germany (Connor, 1989) to North Korea (Suh, 2004) legitimized and institutionalized cults have devastated societies, subjugated entire segments of populations, and committed some of the worst atrocities ever observed. Cult members become emboldened after charismatic leaders endorse their actions, while filling their minds with lies, fantasies, and rhetoric that promise salvation. As David Livingstone Smith put so eloquently in his 2020 book On Humanity: Dehumanization and How to Resist It, “We are all attracted to the possibility of being rescued from the frightening contingencies of life, to finding a place in the world where we and those whom we love are safe and secure. That’s why the leader who promises to deliver us from evil can have such a magnetic appeal. Drunk on the illusion, the audience feels powerful again. Depression and fear give way to manic elation – to feelings of triumph, control, and contempt – and the stage is set for an explosion of violence.” (p. 132).

It’s easy to assume that the institutionalization of cult-like behaviors could not happen in a democratic republic like the United States of America. The U.S. is built on foundational, legal structures that are designed to protect it from the dangers of phenomena like cults, tyranny, and terrorism. In reality, we are dealing with the infancy of an institutionalized cult. If we fail to address it correctly, America will pay the price. Previous societies that tolerated such behaviors, especially when those behaviors were given legitimacy by a leader, watched as they became institutionalized to maintain power and enforce the agenda of a regime (Connor, 1989; Suh, 2004). Even societies that were democratic in nature, fell victim to this destructive cycle. If there is one thing history has taught us, it’s that political systems, no matter how brilliantly designed, are only as strong as the people who function within them and who defend them.

When a leader is allowed to foment lies and conspiracies designed to convince their followers that their way of life is under attack and to incite them to violently derail constitutionally required proceedings through treasonous acts, cult-like behaviors now pose a clear and present danger to the republic. 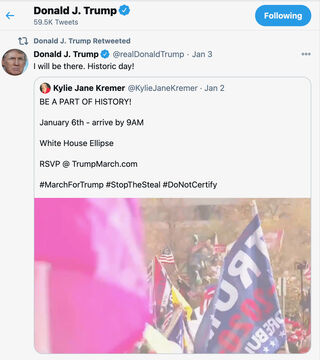 Tweet from Donald Trump Inciting his Followers with Lies

Contrary to what some experts assert, I argue that the first step needed to nullify dangerous and destructive behaviors that have been legitimized is to openly recognize when the group committing these acts is a cult, and what that means for democratic republics. I have made the argument in this series, agreeing with Hassan (2019) that the cult following Trump is real social phenomenon. Giving something a name makes it real, as well as something that can be communicated about. The second step needed to nullify the impact of dangerous and destructive behaviors that have been legitimized is to show zero tolerance when dealing with the individuals involved. What happened on January 6th at the U.S. Capitol was an illegal action designed to threaten and undermine the government, one tantamount to treason. Nothing that occurred is protected under the First Amendment to the Constitution or any others. A society of laws cannot allow those acts to go unpunished.

The stark contrast between the readiness and response levels observed on January 6th and those observed last year during Black Lives Matter protests has been recognized widely. The harsh reality is that for authorities dealing with protesters, there is a double standard in the U.S. Until January 6th we had, primarily seen that dangerous, double standard played out at the state level. It is now on display for the entire world to see. We have to recognize the clear and present danger posed by emboldened, entitled, violent groups that have been legitimized by Mr. Trump and afforded leniency from law enforcement. If the U.S. is going to neutralize these destructive behaviors they have to be addressed equally, regardless of who is involved.

The third step needed to nullify the impacts of dangerous behaviors that have been legitimized is a longer proposal, focused on a societal shift. Societies afflicted with these behaviors need to infuse their educational systems and socialization processes with strategies designed to recognize and overcome the tendency for humans to form in-groups, act aggressively to outsiders, and in some cases form cults based on the shared beliefs of the in-group. This is a process that can take years, even generations and requires multiple approaches across society.

This grand experiment we call America stands upon the edge of a knife. If we do not rise to the challenge, and neutralize these cult behaviors in its infancy, our republic will fail, to the ruin of us all.

ExxonMobil to cut 7% of its workforce in Singapore By Reuters