Why Bigger and Faster Is Not Always Better

Full frame and medium format systems can produce images of greater quality than APS-C. But that greater quality is rarely perceived, even in very large prints. I call it “overkill” because we cannot perceive the advantage of this more expensive and heavier equipment.

Author’s note: Dear Reader, The article below may initially appear to contain my opinions. But I ask you to read closely. There are no opinions in this article. Only facts. Sincerely yours, Alan.

It’s widely thought that large prints are where larger sensors might be perceived as better. There are many online articles and discussions which address the question, “At what print size does full frame quality perceivably surpass APS-C?” But these discussions are rarely backed up with actual tests.

This comparison, by Norwegian professional photographer and photography teacher/author Magnar W. Fjørtoft, is backed up with a real test. He shot this scene of a shipyard containing great detail at f/8 on his old 12mp APS-C camera and his brand new 24mp full frame camera.

He printed each photo 43″ wide and asked a group of 30 photo professionals and enthusiasts to write down which camera shot each print. Was it the 12mp APS-C or the 24mp full frame? They were allowed to examine the prints as closely as they wished.

Only 50% of their calls were correct, which is the same a flipping a coin. Magnar said that he himself could not detect a difference between the prints and had to label them on the back “A” and “B” to keep track of which was which.

He briefly described the comparison here. However, he kindly sent me a more detailed description and this actual test image. He is very experienced at printing images for maximum possible quality and took great care in producing the comparison prints. After printing both images, Magnar wrote, “We simply could not believe our eyes! Then we laughed and laughed. We could not spot any differences!”

Magnar and his colleagues compared 12mp APS-C and 24mp full frame cameras. My discussion which follows compares 24mp APS-C and full frame, which brings the APS-C image quality much closer to full frame.

There are also arguments that we won’t perceive a difference with even larger prints, because we view larger prints from farther away.

My Comparisons of APS-C and the Highest Resolution Full Frame

The bookshelf below was shot with a Sony a6400 (24mp APS-C) and a Sony a7R IV (61MP full frame). The a7R IV is the highest resolution full frame camera available at the time of this writing (December 2020). Thus it has the greatest available resolution advantage over APS-C. Both cameras used the same Sony 90mm f/2.8 macro lens, which is one of the sharpest lenses available for these cameras. The aperture was set at f/5.6.

This is the complete frame: 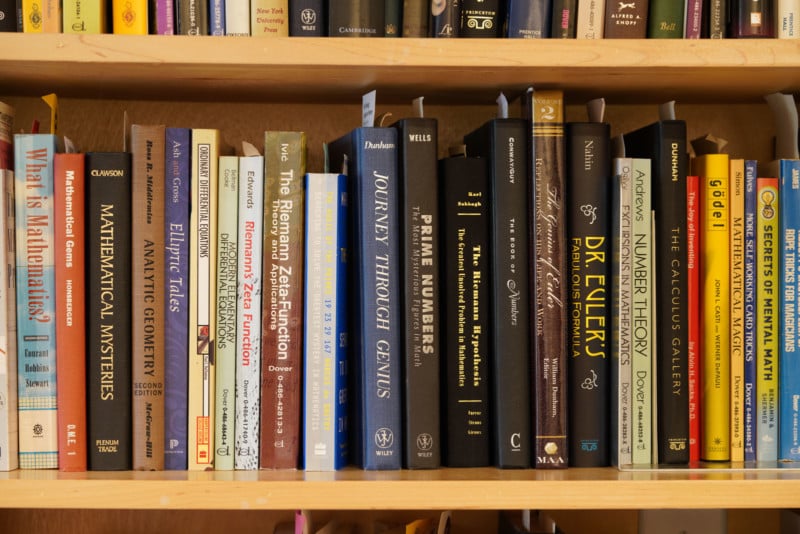 The full frame camera was moved closer to the subject so that both images had the same field of view. The original images are available for you to download and study.

For the image below I reduced the full frame image to about 67% so both images have the same number of pixels. Reductions like this increase image quality. Then I cropped a 1,000-pixel wide center from each camera’s image and placed them on the same background. Viewing this on a 15″ laptop, these cropped images simulate viewing the center of a print 42″ wide. 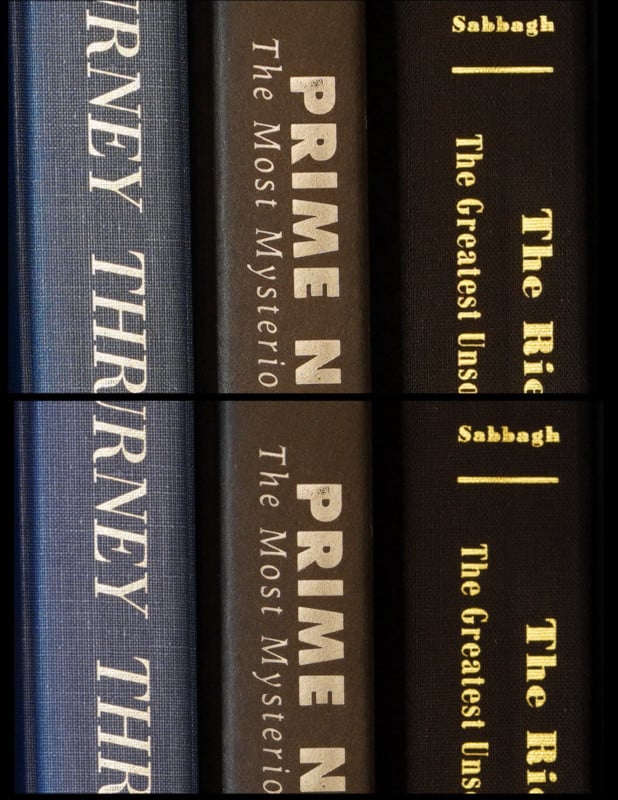 The above comparison is 24mp APS-C to 61mp full frame. Both sensors have about the same pixel size and thus the same noise.

But what about comparing 24mp APS-C to 24mp FF? In this case, the resolutions are identical, but the FF pixels are larger and will have lower noise, but only at high ISO. 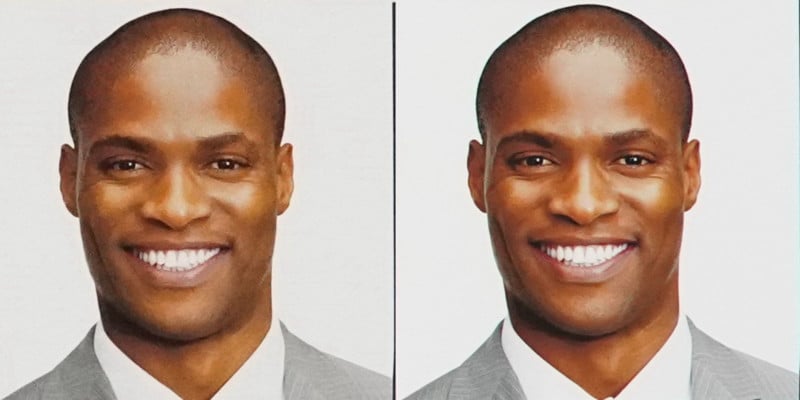 These images are taken from DPReview‘s Studio Scene comparison tool. The image on the left is from a 24mp a6400 and the right is from a 24mp a7 III.  Both are ISO 6400, which is higher than I can recall ever shooting.

Upon close inspection, the full frame image has slightly lower noise.  But each of these image crops is only one-tenth of the 6000 pixel-wide image.  Step back about four feet as if you are looking at a 30- to 40-inch wide print, ten times wider than each face. The noise difference between these images is not perceivable at viewing distance.

Recently I sought a camera body for bird photography and considered 24mp APS-C and 24mp full frame. Although both have the same number of pixels, the pixels are spaced farther apart on the full frame sensor. With the same telephoto lens, a bird would be only 67% as many pixels high on a 24MP FF sensor as it would be on a 24MP APS-C sensor. Thus, for this situation, full frame is inferior to APS-C.

I also considered the highest resolution full frame camera available, the 61mp Sony a7R IV which has 266 pixels per mm. But 24mp APS-C has 256 pixels per mm so they are almost equal. With a given telephoto lens, a bird would have nearly the same height in pixels on both sensors. But I always crop away surrounding imagery to emphasize the bird. So with this full frame camera, I’d just crop away more surrounding imagery.

What About Micro Four Thirds?

You might ask, “If APS-C is so good, what about Micro Four Thirds?”. Although I don’t own this system, I’ve studied many resolution tests, and sample photos. The image quality usually falls slightly short of APS-C and full frame. Perhaps that’s because the lenses aren’t capable of sharply resolving the 300 pixels per millimeter sensors.

A lot of money and muscle are wasted on fast macro and portrait lenses. But their depth of field at large apertures is too shallow for the intended application.

In macro photography, we always struggle for depth of field. Experienced photographers use f/16 and f/22. So if we shoot macro at f/16 and f/22, why are our macro lenses f/2.0 and f/22? This unused speed adds substantial cost and weight to macro lenses.

Each of these three squares is 1200 pixels wide, which is one-fifth of the 6000-pixel wide frame. The entire image would be about 15″ wide at this scale. I had to blow it up to double that size to see slight diffraction softening in the f/22 frame. And a bit of sharpening eliminated that. Yet photography gurus are constantly warning us about diffraction.

Focus stacking is sometimes done to increase depth of field in macro work, but stacks are not comprised of f/2.8 shots. f/16 would be a typical choice for stacking.

Fujifilm recently announced a $1,500, 50mm f/1.0 lens that weighs almost two pounds. The title of their announcement clearly states that portraits are the intended use of this lens, “Heralding a new age of portrait photography”. But a head shot with this lens has a depth of field of 5mm at f/1.0. That’s about the length of an eyelash.

I’ve asked what aperture professionals use for portraits. f/4 and f/5.6 are common answers. But much smaller apertures such as f/11 will completely isolate the head when the background is distant.

This portrait was shot at f/11.

About the author: Alan Adler lives in Los Altos, California. He has been an avid photographer for 60 years. He is also a well-known inventor with about 40 patents. His best-known inventions are the Aerobie flying ring and the AeroPress coffee maker.