Disclaimer: I don’t claim that what I say is totally “true,” because the truth is elusive in this complicated world. Rather, I’m offering some ideas to help perceive the world, others, and ourselves in a manner that opens pathways for change and growth. 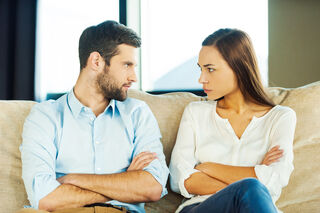 For most of us mere mortals, admitting we are wrong is very difficult, even under the best of circumstances. At times we argue vehemently over trivial matters, even with loved ones. In such instances, we might notice how we avoid admitting we are wrong, or how we quickly point out how the other person was wrong about something else. “Oh, yeah, well maybe I did forget to take the trash out, but you constantly leave your dirty dishes in the sink!” When it comes to more substantive issues, such as politics, we will often argue as if our very lives depended upon it.

“To your common sense firm arguments, I won’t listen to your voice of reason trying to change my mind. I mind my feelings and not your words. Didn’t you notice I’m so headstrong even when I know I’m wrong?”  —”Headstrong,” 10,000 Maniacs.

The Consequences of Not Changing Course

Like the attack on Pearl Harbor, January 6, 2021, will be a date which will live in infamy as a Trump-incited mob stormed the U.S. Capitol, resulting in the deaths of five Americans. What went wrong? What we can we do differently so something like this never happens again?

Politicians are notorious for not admitting wrongdoings. In part, this might explain the oxymoron of “an honest politician.” Many of us have trouble admitting minor mistakes, so we can only imagine how difficult this would be for a leader in the political spotlight. Importantly, this pertains to both Republicans and Democrats.

Our difficulties in admitting when we are wrong is a human problem that transcends our political battle lines yet contributes to their existence. In these deeply divided political times, it’s critical for both sides to admit when they are wrong in order to help us come together as a nation. Our learning and growth depend upon us recognizing our errors and making changes to correct them.

This complicated world is ever-changing, which is part of what makes it so complicated to begin with! Even as we try to grasp truth, grasp reality, it slips through our fingers as if we were trying to hold water. We know that change is constant from our own experiences. Our kids grow older, we change jobs and careers, technology evolves, thoughts and feelings come and go, the sun rises and sets, and even stars and galaxies are born and die. Our present becomes the past every moment. Adhering to a fixed mental position of “I am right, and you are wrong” is at odds with the dynamic, changing nature of the universe.

“I watch the ripples change their size, but never leave the stream of warm impermanence.”  —”Changes,” David Bowie

The changing complexities of this world can be overwhelming and scary. The world of modern humans is orders of magnitude more complicated than that of our nomadic, hunter-gatherer ancestors. Knowing who we are and what we are about imposes an organizing force upon chaos. Unconsciously, we feel compelled to categorize ourselves and others into groups. We want to identify with roles, teams, and groups because doing so helps us feel more connected, more grounded, and safer. We know where we stand and who stands with us. This simplifies complexity.

Our ego, or sense of self, finds comfort in our various identities. Just as we have fight, flight, or freeze instincts to protect our physical well-being, we defend our psychological sense of self when our various identities are threatened. This is why when, if someone makes fun of our favorite football team, city, state, country, music artist, political party, religion, our ideas, and so on, we feel a surge of emotion to defend them. In a way, this is quite curious. Why does our favorite football team or music group need defending? They aren’t actually under any attack. They don’t need our protection, yet we experience this almost irresistible urge to defend them.

Our ego, or sense of self, becomes attached to being right in the same way it becomes attached to various roles, groups, and identities. Being right allows us to feel superior to others whereas being wrong makes us feel inferior. When our sense of self, our psychological projection of who we are, is being threatened, we defend – or even go on the attack. Right or wrong, win or lose, it becomes a zero-sum game.

Yet, the struggle over right/wrong can almost feel like life or death. Our evolutionarily-based fight/flight/freeze instinct becomes activated. We argue, deny, and distort reality to protect our our status and sense of self. Importantly, the ego (sense of self) that makes us inclined to defend our mental positions and identities is the same ego that makes us inclined to gloat when we are right.

Our Sunk Cost: Going Down with the Ship

We are all for fairness, reasoning, and impartiality when it benefits us. The greater level of psychological investment we have in an idea, a view, political party, cause, etc., the more inclined we will be to defend them when they are threatened. Borrowing from behavioral economics, this is related to having a sunk cost. When our personal or social identity is at stake, we are more likely to distort reality and deny that we are wrong to defend such identities. If we think of our sunk cost (psychological investment) as climbing down a ladder into a very deep pit, as we go further and further down the ladder, it becomes easier to go one rung further down to see where it leads us than to climb all the way back to the top.

Thus, if we’ve championed a movement, cause, group, or belief, it is extremely difficult to back out and say, “Um, yeah, I was wrong for spending all that time, money, and energy promoting that cause for the past 10 years. I’m terribly sorry that I wasted part of my life, and yours, doing that!”

On top of that, if we have others within our social group with whom we are well-connected, there is a very painful social cost to admitting we are wrong. When we don’t conform to our group’s ideals and identity, we will be cast out. From an evolutionary standpoint, loss of our group, our tribe, frequently meant death. This alone is often enough for us to engage in various cognitive gymnastics to convince ourselves we are right so that we can stay within our group and maintain both the social connections and our identity.

Admitting we are wrong is difficult because we attach our sense of self to an idea, cause, or group. When we feel that idea about the self, our identity, is threatened, our evolutionarily-linked fight, flight, or freeze survival mechanism becomes activated. We defend against being wrong and fight to be right. However, this creates a major problem.

Change is the nature of the universe, and change is our evolutionary purpose of life. We must be flexible to learn and grow, and this necessitates that we recognize when we are wrong. We are in disharmony with the change that is inherent in this universe when we stubbornly, inflexibly refuse to accept when we are wrong. In turn, this disharmony, this fundamental incongruency, creates suffering for us and those around us. There is great, untapped power in the flexibility inherent within the admission: “I am wrong.”  If there is one thing that we need right now is greater flexibility in order to escape from the toxic, rigid partisan hatred that is dividing America.

Newcastle could sack Steve Bruce after training ground bust up