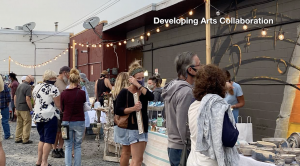 REHOBOTH BEACH, Del. – One popular space for artists to show and sell their work has been shut down by city officials in Rehoboth Beach, but in its absence, an organization is finding other ways to help local artists.

“It’s been a tough year for all small businesses, and I think that artists are really having to learn to adapt,” Patrick Gallagher, with the Developing Arts Collaboration, said.

And artists in the resort town are doing just that: adapting, after the popular Creative Marketplace that happened outside of Rehoboth Ale House every Monday has been shut down.

“It was really an opportunity for us to have our vendors interact with the community, sell their goods,” Gallagher said.

Gallagher says he’s not entirely sure who with the city told them they could no longer operate, but a spokesperson for the City of Rehoboth Beach pointed 47 ABC to article four, section 120 of the city’s legislature, which says any vendor in the city must have a license to sell products. But Gallagher says even with the city’s shut down of the creative marketplace, his organization is just looking to help local artists any way that they can.

“We’re more focused on giving our artists the opportunity to develop their careers as business people as this is a full time job,” he said.

And that, despite the disappointment of leaving the creative marketplace behind, they’re looking ahead to other events where artists can sell their products.

“What we’re really focusing on right now is our Dewey Sip and Shop,” Gallagher explained.

Because for the Developing Arts Collaboration, it’s all about the artists and how to help them hone in on their passion.

“I think it’s important for us to think now more than ever about how local artists and crafts people have been affected a lot by this year,” Gallagher said.

Gallagher says this year’s Dewey Sip and Shop will be held from November 27 until the 29, but the exact location has not yet been announced. He says they hope to make that announcement by the end of this week, but in the meantime they are looking for sponsors.

If you’re interested in sponsoring that event or supporting the developing arts coalition in another way, you can visit their website.

Director of Mass MoCA, Playground for Artists, Moves On – The New York Times