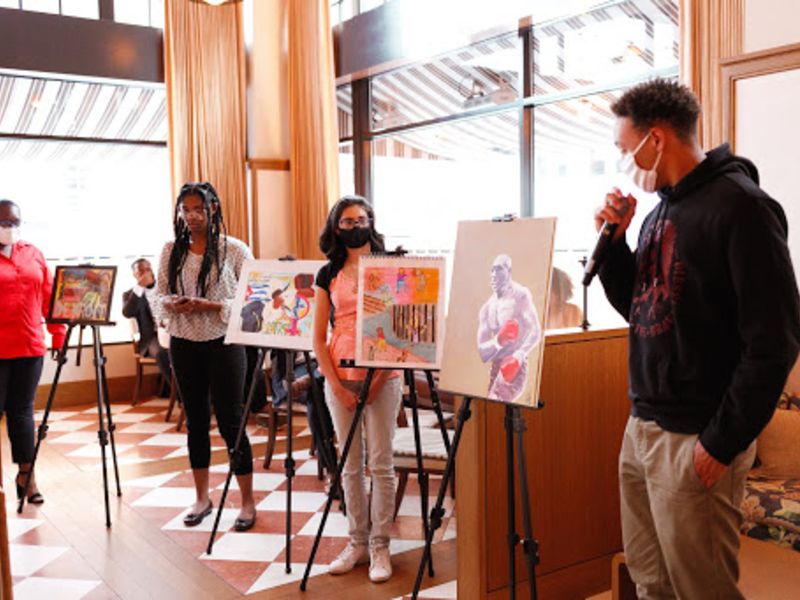 As part of the theme “Advancing Equity,” Detroit Homecoming VII partnered with Salonnière to highlight Black artists and Black collectors during the September event.

Salonnière created an Art & Activism campaign to give high school art students in Detroit a platform to use the power of art to voice their feelings on issues such as racial justice, immigration, climate change and activism.

To kick off the project, the Shinola Hotel and San Morello restaurant hosted an art salon “takeover” dinner on Sept. 23, featuring conversations with Black artists, collectors and student artists.

The Sept. 23 art salon event also sparked a special menu paired with Kelly’s work, “The OG’s: Grandma and Auntie.” Patrons can order the menu at San Morello or for delivery and pickup through Oct. 24, with a portion of the proceeds gifted to DPSCD fine arts programming.

Artist Desiree Kelly described the collaboration with Chef Andrew Carmellini: “Grandma and Auntie are two of the strongest people I know…. I love the idea of a creative interpretation of my work and transforming it into another medium (cooking) and just like my artwork, creating a new genre.”

Salonnière is a culture and conversation agency inspired by historic, female-led salons in Harlem, Paris, Cairo, Berlin, Buenos Aires and other spots around the world.

“We want to encourage the Homecoming community and the wider Crain audience to support, collect and purchase work from Detroit-based artists and celebrate the work of youth artists,” said Salonnière founder Julie Egan, who attended Detroit Homecoming I while working for the U.S. State Department.

Egan noted that the French meaning for “Salonnière” is “the woman who holds salons.”

Besides Shinola Hotel/San Morello, other sponsors of the initiative include the Richard and Jane Manoogian Foundation, the Knight Foundation and the audio-visual firm, KLA.

To support featured artists, Kelly’s limited edition signed prints of The OGs: Grandma and Auntie are available through October at salonniere.co/desiree-painting.