Chills, Thrills and Challenging Films: Here Are 10 to Stream – The New York Times 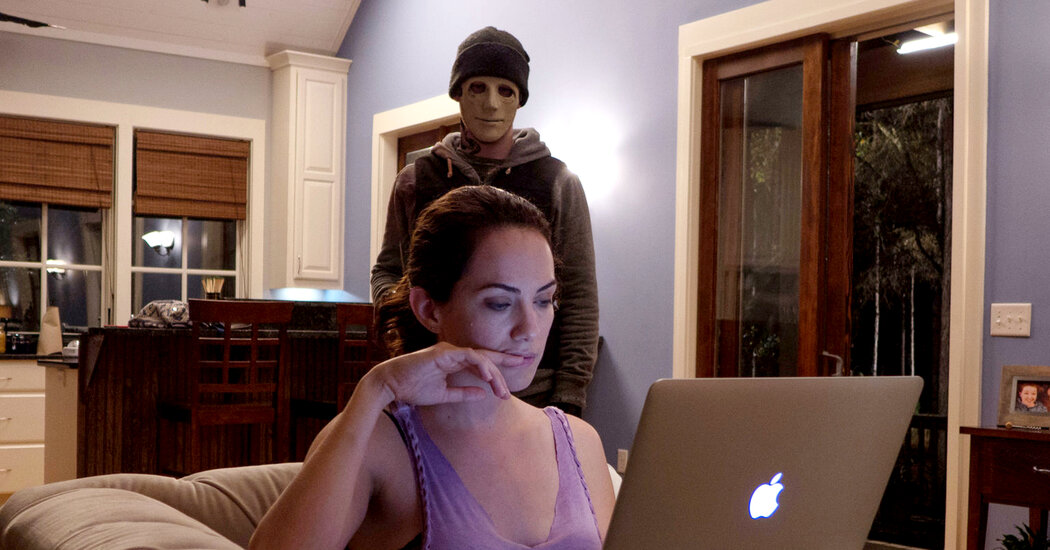 With Halloween on the horizon (a compromised version of it, to be sure), this month’s streaming recommendations have a decidedly ghoulish tilt — after all, while there’s no shortage of horror movies on your subscription services, there’s an awful lot of dreck to sift through. And if you’re not up for creature features, no worries; we’ve also got a heart-rending indie drama, an unorthodox rom-com, a foreign thriller and two boundary-bending documentaries.

Stream it on Netflix.

The best low-budget horror often scores points for efficiency, and this 2016 thriller from the director Mike Flanagan (“The Haunting of Hill House,” “Doctor Sleep”) is tight as a drum, running a lean, mean 81 minutes and not wasting one of them. Both a riff on and an update of “Wait Until Dark,” “Hush” concerns a deaf novelist (Kate Siegel) who finds herself trapped in her isolated country home, attempting to elude a serial killer (John Gallagher Jr.). “I can come in any time I want,” he taunts her. “When you wish you were dead, that’s when I’ll come inside.” This elegantly simple game of cat and mouse escalates into full-scale physical and psychological warfare, relentlessly paced and masterfully staged by Flanagan, and acted with fierce conviction by Siegel.

J.J. Abrams produced this clever, “From Dusk Till Dawn”-style bait-and-switch from the director Julius Avery, which mashes up two seemingly incongruent subgenres: the World War II “men on a mission” adventure and the mad scientist horror movie. On the eve of D-Day, a team of paratroopers sneaks behind enemy lines in France to take out a communications tower, and finds a Nazi outpost where the goings-on are a good deal scarier than expected. Avery builds to his big reveal slowly, but once the cat is out of the bag, it goes wild, and the picture’s back half is a scary, darkly funny, blood-spurting, bullet-spraying good time.

Stream it on Netflix.

Similar genre-flipping shenanigans abound in this 2016 psychological horror film from the writer and director Babak Anvari. Set in Tehran near the end of the Iran-Iraq war, it begins as an Iranian social drama, something not far from the works of Asghar Farhadi. But it ends up closer to “The Babadook,” a visceral and often upsetting examination of the inescapable psychological burdens and claustrophobia of parenthood. The movie features Narges Rashidi as a young mother trying desperately to care for her sick and needy daughter while battling strange, vivid nightmares. Thanks to Rashidi’s naturalistic performance and the low-fi but disturbing special effects, this one really gets under your skin.

The directors Justin Benson and Aaron Moorhead have made a specialty of low-budget sci-fi and horror that emphasizes ideas over pomposity. (Their latest, “Synchronic,” is now in theaters.) They also star in this 2018 effort, as two brothers who attempt a friendly wellness visit to the group — perhaps a commune, perhaps a cult — where they spent their early years. As with “Under the Shadow,” “The Endless” is constructed first and foremost as a character-driven drama, with nary a wink in its grounded performances and dialogue. And thus its eventual, inevitable turn into supernatural territory is anchored in reality, with bona fide stakes attached.

Stream it on Amazon Prime.

Those who are fascinated by horror but don’t have the stomach (or nerves) for a full-scale feature might enjoy this thoughtful survey of scary movies, as seen through the lens of African-American creation and representation. The director Xavier Burgin assembles a cornucopia of entertaining clips and a deep bench of horror critics, historians, actors and filmmakers to walk through this history, hitting not only the expected highlights (“Night of the Living Dead,” “Candyman,” “Get Out”) but the less explored cul-de-sacs of genre cinema. It’s a lively, entertaining slice of film history, and well worth a look here in the spooky season.

The latest drama from the writer and director Eliza Hittman (“Beach Rats”) had the misfortune of hitting theaters just as the country was going into lockdown, which is a shame; it’s easily one of the best movies of the year. The newcomer Sidney Flanigan is astonishing as a troubled 17-year-old who has to travel from her small town in Pennsylvania to the intimidating unknown of New York City to terminate a pregnancy; Talia Ryder (also making her feature debut) is quietly wonderful as the cousin who tags along for moral support. Hittman’s subtle but affecting style underscores what the best of topical drama can do: spotlight an important social issue, but in (often uncomfortably) personal and intimate terms.

Stream it on Hulu.

This low-budget thriller from the Danish director Gustav Moller begins with an elegantly simple premise: A police officer takes an emergency call from a woman who’s been kidnapped, and spends the rest of the film at his desk attempting to save her. Rather than ramping up the melodrama by intercutting outside action, Moller pushes in, tightening the tension by sharing no more than what his protagonist can hear over his phone lines. That choice underlines the character’s helplessness and psychological need for heroism (and redemption for his own sins). The results are unnervingly effective.

Other Music in Manhattan wasn’t just a vinyl shop — it was, true to its name, an outpost for the discovery and enjoyment of artists and styles strange and exotic, a place where you could find records that were maybe too cool for you, and get away with it. Puloma Basu and Rob Hatch-Miller’s documentary is a loving tribute to the scores of people who took that otherness as a challenge rather than a threat, who found things there they might never have tried, and who have to scrounge to find a source like that now (the store closed in 2016). But “Other Music” isn’t just a requiem or eulogy; the crate-digging spirit is infectious, and it’s impossible to watch the film without jotting down records and artists to track down and queue up. It somehow seems appropriate that four years after closing its doors, Other Music is still helping people find great tunes.

Stream it on HBO Max.

Zoe Kazan wrote and stars in this comedic fantasy, in what feels like a frustrated response to her years of playing “the girl” for idealizing male screenwriters — since she plays a perfect woman created by a novelist, and willed into existence solely to love and inspire him. Kazan’s script and performance are inspired and entertaining, while wrestling thoughtfully with knotty issues of representation and our ongoing obsession with “the muse.” Paul Dano convincingly captures the complementary insecurities and paranoia of her creator, while the directors Jonathan Dayton and Valerie Faris (“Little Miss Sunshine”) strike the right balance of quirkiness and commentary.

Most moviegoers these days only know John DeLorean because of “Back to the Future,” where his futuristic car is transformed into an unlikely time machine. But even the plot twists of that science-fiction adventure pale in comparison to those of the car’s actual creation, in which the flashy exec went from auto-industry wunderkind to the insolvent target of an elaborate cocaine sting. Don Argott and Sheena M. Joyce’s film is a clever mixture of documentary and biopic, combining real archival footage, staged re-enactments (with Alec Baldwin as the title character), and in-between meta-movie analysis. It’s a tricky mixture, but so well executed that Argott and Joyce end up with something like the best of both worlds.